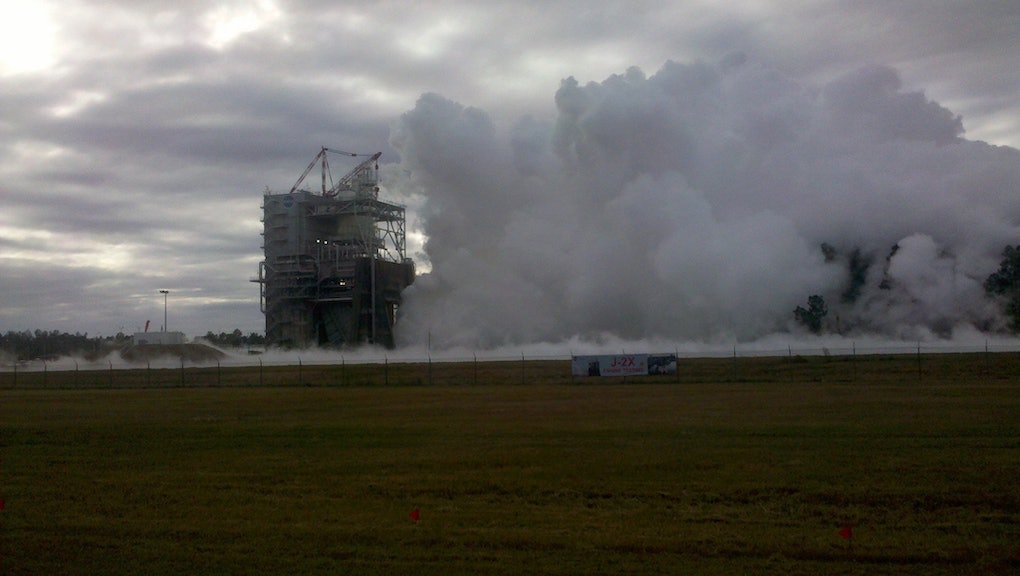 At a loss of $1.2 billion, NASA has officially shelved the massively expensive J-2X engine program. Development testing wraps up next year, but the problem is that there is currently no use for these super powered rockets. It is one thing to shoot for the stars, but aspirations without an actionable plan are nothing but a dream. There have been many advancements in the private sector that are making space travel far more practical and effective. Going forward, learning from its partnerships with the private sector is one way NASA can be successful in a time of government cuts.

The J-2X was designed to be strong enough to propel humans on a journey to Mars. But in 2013, the rest of our technology isn’t capable of that dream. There are plenty of obstacles, like massive amounts of radiation during transit and on Mars, lack of gravity, and its effects on the human body, the inability to provision a life on a ship, and the length of the trip. The RL-10, another heavy-lift SLS (Space Launch System), is able to accomplish all the tasks that humans are technologically capable of. Most of what we can do is contained in orbit or on the moon, making this added rocket pointless. By the time we actually get around to a successful trip to Mars, this technology will likely have been replaced.

Fortunately, we live in an age where space travel is no longer limited to the government. Entrepreneurs and scientists like Elon Musk and Richard Branson, both “small ‘l’ libertarians,” have been pioneering space travel in the private sector. Their advances are making it something that the whole human race can potentially experience. Musk’s SpaceX was one of the first companies selected with a contract from NASA for private space travel, and Musk's desire for space travel is the same desire that drove NASA to create the J-X2. SpaceX's successful rockets, Falcon 9/Dragon, were initially designed for cargo transit, but have now been expanded for focus on human transport. SpaceX has done so well that it has pushed policy towards private human space flight via the Augustine Commission, or The Review of United States Human Space Flight Plans Committee.

In the more commercial arena, the billionaire owner of the Virgin brand, Richard Branson, trademarked “Virgin Galactic” 10 years ago and now is now using it the moniker for passenger flights to space. While tickets are expensive, they are available for purchase to anyone with an internet connection. In a short time, these individuals have created amazing technologies with less capital backing than NASA.

Space exploration can no longer a be a contest to see who’s got the biggest rocket. Humanity needs to expand in ways that aren’t linear. Imagine a world where companies can send up a team of scientists to work on a dedicated floating lab of their own, testing the effects of space in new ways to develop new medical procedures that benefit all of humanity. Now, imagine a world where the sole actors in space are the Russian, Chinese and American government. Which do you want to live in? Making this process cheaper and easier will allow more innovations to take place that don’t have applications in ballistics and warfare. A vibrant private sector makes a peaceful public sector.

If the history of privatization of transport and information services is any guide, the future of NASA will be like that of the Postal Service. After costing the taxpayers billions in losses for illogical choices by entrenched special interests, it will no longer be worth the investment to taxpayers. NASA as we know it will become a relic when there become private alternatives that are far cheaper and faster to transport goods and information. In the mean time, they may find success by partnering with the best and brightest outside of government. Looking at the private space travel through companies like SpaceX and Virgin Galactic instead of creating rockets that can’t take us anywhere is a great place to start.