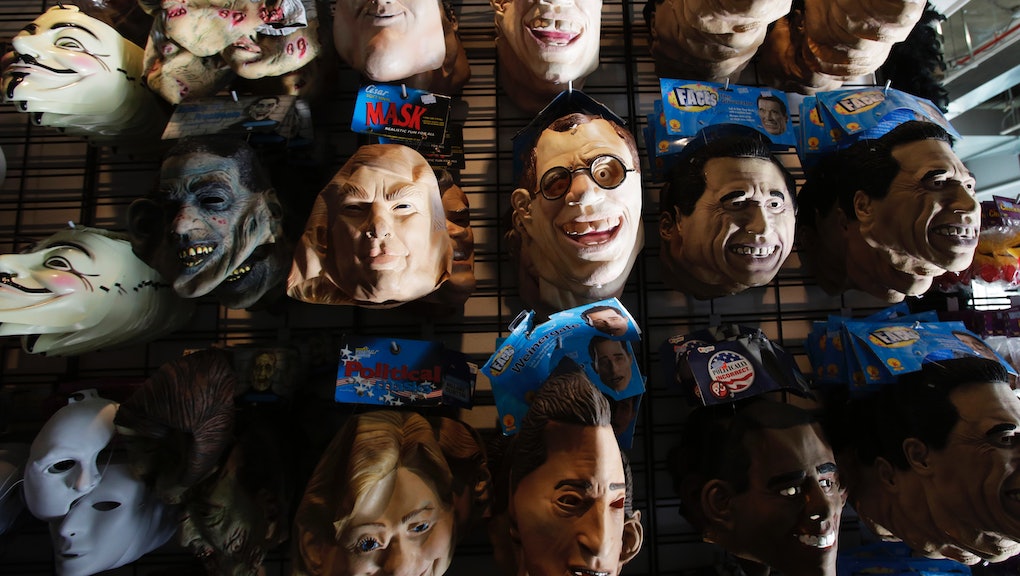 It's Halloween, and that means it's time to be the funniest, sexiest, or most topical person in the room. By topical, I mean that, more than anything, we want to poke fun at the year gone by. It's the time that ghosts walk among us, so why not lay the ghost of another year of tomfoolery to rest through the medium of clothing?

Here's a surefire list of the most current looks for this holiday. And remember, if you aren't feeling up to it, call and tell your friends you're going as the Iranian extreme right's views on the Holocaust.

We will probably spend the next few years attending parties with people dressed as Walter White. The period of people pretending to be Don Draper might be at an end this year. Look for 60s chic to become the more contemporary meth addict look. Huzzah.

But there's one way to push this costume even further: by going as the show itself. What could be more 2013 than a costume with a multimedia element? When you're at the party and rocking your bald cap, make sure everybody there not only talks about your costume, but also tweets and posts Facebook statuses about it constantly. Because, obviously, nothing matters more than another episode of Breaking Bad. Nothing. At. All.

What's the point in a highly controversial music video if you can't go to a party in one of the featured outfits? Arguably, there's no point. And what says Halloween more than looking like you're a Terry Richardson model? Again, probably nothing.

The world was rocked by Robin Thicke's video and — like it or not — the world won't be forgetting the partial nudity of the models any time soon. If you're an exhibitionist (which you probably are if you're reading this and looking for a zany Halloween costume) then there may be no better costume than one of the "Blurred Lines" dancers. Feminism, after all, has never seemed to have a place in Halloween.

Alternatively if you have an old Beetlejuice costume knocking around, you can always go as Robin Thicke at the VMA's. Don't tell me you didn't think the same thing.

The food that recently took the world by storm, and rightly so. If there is anything more 2013 than the pastry lovechild, I don't want to hear about it. It's a fairly simple costume to achieve — go for hoops and big skirts (yes, even for the men) to give yourself the width and delicate layers of a bastardized croissant.

For added effect, make people queue for three hours to see the costume. Like the original, it will definitely be worth it.

We all remember the scandal, right? All you need is a hamburger costume (yes, they exist) and one of those horrid rubber horse masks that seem to be everywhere. Remind everybody through your clothes that they can never know what they're eating.

Political halloween costumes are on the upswing … said me. And short of going as a zombie Maggie Thatcher (but where to find tweed skirt suits on a budget?) there aren't many iconic political figures that are easy to satire.

But then 2013 gave us the whistleblowers. Edward Snowden's face has been shown on enough news outlets that you can probably recreate one of his outfits easily enough to appear as him at a party. Hell, you can go in just about any clothing and say you're Snowden. Nobody's going to say you aren't keeping up with his sartorial flare.

This Halloween, every sex shop in New York will likely have increased sales in BDSM-wear as hordes of people prepare to go as Anastasia or Christian. But it's always difficult to rock the literary costume because we don't have pictures of the characters. Worry not, however: nothing is better for literary dress than a pun. There have been many times that I've found myself without a suit before a James Bond party and resolved the issue by strapping a set of beanie baby cats to my chest and showing up as Pussy Galore. Everyone loves wordplay, so ...

Find any piece of grey clothing. Any piece at all. Whip out some bleach and get tie-dying. That's right: dye as many shades of grey as possible into one piece of fabric. Now wear it.

While we may not all be lucky enough to look like Sandra Bullock or George Clooney, anybody can obscure his or her plebeian features with a space suit.

If you can't bring yourself to splurge on a NASA spacesuit, there is still a costume available to you. Cut your hair, don some black shorts and a grey tank, and spend the party floating about in the fetal position. Let's be honest, a good Halloween party always ends with your knees tucked up to your chin anyway.

Winter is coming, so what better time to get out the pelts and the greasy hair? We've all had days when we're not looking our best, and those are the days when you just want to say you're getting into character as a Medieval swordsman. Halloween is the perfect excuse.

I didn't want to go there. Honestly, I didn't. But with her tongue out and her weird hair knots, Miley already has the appearance of a raving gorgon. Also, she's probably easier to mock on a budget than Gaga or Minaj. Alternatively, if you have a craving for some new piercings, you could always try the Amanda Bynes.

Remember to twerk. Remember to continuously point out how you're trying to get rid of your old image (last year's costume). And then next year, nobody will remember your costume this year.