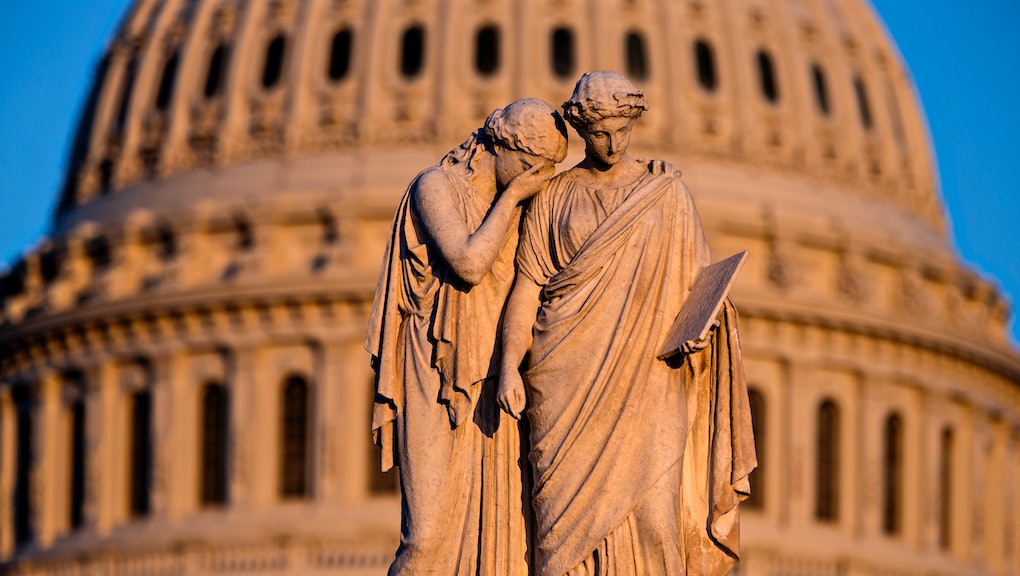 5 Unexpected Lessons From the 2013 Government Shutdown

To celebrate the start of our third week of the government shutdown, here are a few dispatches from the fiscal abyss.

1. We don't really want to throw the bums out.

Not long ago, most Americans believed that the way to “fix” Washington was to vote the establishment out of office. “Change You Can Believe In” was the slogan under which an undeveloped but exciting senator from Illinois swept the Democrats into the White House in 2008, and the sentiment reverberated on the Right as “Taking America Back!” shortly after. Both Obama and the Tea Party won elections on the virtue of their outsider status and the promise of shaking establishment elites into doing something for once. And both were extremely successful: Obamacare achieved (a version of) the health care reform sought since the Truman administration, and the Tea Party has repeatedly thrilled to the wild fever dream that is bringing the U.S. to the brink of insolvency. The problem, though, was that all of them suffered from inexperience in government. Our present dilemma stems from Obama’s inability to effectively set the agenda and the Tea Party’s inability to spell the word ‘compromise.’

Here at the nadir of dysfunctional government, we can safely put down the romantic theory that outsiders necessarily make Washington run better. Don’t be surprised if the rehabilitation back to sanity recalls a few old faces in the coming years. Establishment figures such as Hillary Clinton and some of 2010’s Republican primary victims could be in demand.

At least to the degree that we may have thought, anyway. Many of us commoners have long suspected that the biggest beneficiaries of Congressional policymaking were the big-ticket corporatists that bought legislators' sympathies with largesse and intense lobbying. Traditionally, that may be the case. Right now, most of them are probably demanding their money back.

In each of the past 14 years, Congress’ most profligate lobbyists have been the U.S. Chamber of Commerce and Business Roundtable, conservative groups which advocate pro-business policy. The members of those associations are the nation’s largest companies, many of which leverage the same capital markets currently facing a cosmic implosion in the event of a denigration of the world’s baseline security. Predictably, the business community is infuriated that the party that has received about $88 billion over the past five years from the Chamber of Commerce alone is now the swashbuckling antagonist of fiscal solvency. The Republican Party’s business base is wondering what they were paying for all that time.

3. The Tea Party doesn't give a damn about your business.

Reducing the cost of compliance is an issue on which business and the Tea Party may agree broadly, but they couldn’t be further apart on how to achieve it. The Tea Party’s solution – to shut down and possibly default the federal government in the name of incoherent demands – bears no resemblance whatsoever to the practices of actual businesses.

It wasn’t generosity that, in 2007, brought the nation’s largest banks together and made them spend their own money to keep their largest competitors in business. They acted out of a fundamental understanding that eludes the Tea Party now: nothing is more important in business than systemic stability. Even the most disruptive companies need to build on solid ground, including a dollar that’s worth something and a risk-free asset (preferably your own government’s) with which to set rates. As Business Roundtable put it, “uncertainty is the enemy of investment.”

This month’s manufactured crisis harms business, harms the economy, and bites the hand that has fed the Republican Party for years. On the bright side, conspiracy theorists of all persuasions should be allayed by the decidedly grass roots of Congress’s ineptitude.

4. The Tea Party is what a principled stand in government looks like.

Sure, it’s an idiotic, poorly-planned political suicide, but it’s still a principled stand. If you feel this strongly about the U.S. government being illegitimate, there’s just no other way to prove it. See point no. 2 above for just one reason that the ideals of Congress’s far right are beyond suspicion, if also logic: they would rather alienate vast swaths of their party’s wealthy donor base than give in to one hated president.

It is interesting to note that the politicians most violently resistant to every suspected incursion of the “nanny state” are the same ones now threatening to bankrupt the entire government and terrorizing the economy in order to save it from itself. It’s the height of paternalism.

5. This never had anything to do with Obamacare.

Why was it ever granted to the obstructionists in the House that their objections to a continuing resolution were the particulars of the health care law? Or any specific law? Though their feelings on the ACA are unquestioned, the current shutdown and debt ceiling are only the third and fourth such installments of what has become a habit in the past few years, of an obstinate Republican House letting go of its demands at the last second.

There was no single policy ultimatum in 2011, yet Republican brinkmanship over ordinary spending cuts nearly led to shutdown and default then as well. Even the Bush tax sunset had to go through a gut-wrenching photo finish in December, and let’s not forget the failure of compromise leading up to the sequester.

If you feel the same disgusted resignation about periodic government shutdowns as you do about news of whatever latest mass shooting, it’s because both have been accepted as inevitable in the surreal mold of politics emanating from the most frightened quarters of our republic. One day we may applaud the conversation turning so decisively and myopically toward debt reduction, but there's only so long Americans will allow real, important matters to be ensnared by the kind of people who fear solar eclipses. The Tea Party's tenure has been exciting, but the brightest flame burns the quickest.