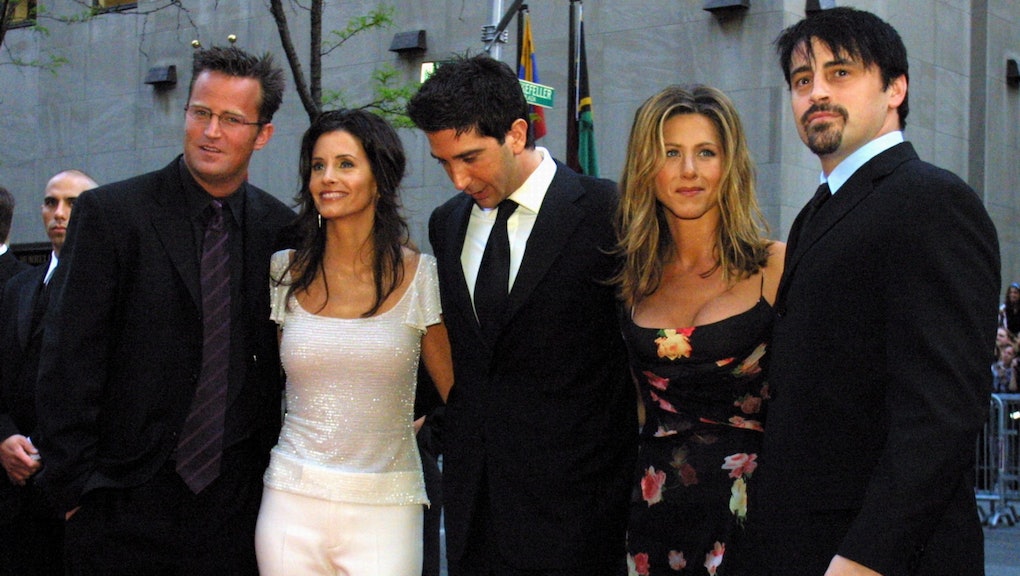 Any (sane) millennial will tell you that the '90s were the best. Overalls were acceptable, Skechers were killing it, Britney Spears hadn’t shaved her head, and Nicki Minaj wasn’t a twinkle in Weezy’s eye yet. It was truly a magical era, and the TV theme songs were no exception. Here's a definitive list of the 10 best TV theme songs from the '90s, in order.

This theme song is super sassy and also remarkably deep for a 12-line song. It talks about how even though they’re twins and they love each other, they have to do their own thing and have their own identities (which would make more sense if they hadn’t just recently found each other after being separated at birth, and therefore were never forced into being similar anyways). Plus everyone loves that soulful voice that sounds somewhat like the gospel singers from Hercules, and the fun little cartoon that narrates what would have likely been a very traumatic (I don’t know, I’ve never fulfilled my Parent-Trap fantasy and found my long-lost twin) backstory in an upbeat and pleasant way.

Okay, so we can all admit that we wanted to spend some time with the Camden family, but we can also admit that sometimes they were just so saccharine that you wanted nothing more than to slap them all. The theme song is kind of the perfect way to capture that contradiction. It’s uplifting, and you want to imagine coming home and seeing their “happy faces smilin’ back” at you, and you “know there’s no greater feelin’ than the love of family.” And then the creepy, constant sunshine-and-rainbows feeling brings you back to the real-world dysfunction. It’s actually kind of brilliant, really.

Who doesn’t love this one? The saxophone in the background, Queen Latifah telling you to keep your head up (what?), the fact that the only consistency in every version of the opening sequence is the girl in fringe that nobody knows. It’s all great. I really love the first season, when they show you the strangest examples of what it means to be “living single” — a pair of hideous black pumps, five sticks of lipstick, and an ATM. Really, it’s about Queen Latifah — she kills it, all day, every day.

This one’s lower on the list partially because I never watched the show and therefore have no emotional attachment to it (and Patrick Duffy creeps me out). It’s obviously iconic, and everyone loves the theme park scene — the jock hitting the high striker! The girls in the funhouse mirror! Oh look, that little boy stole his new brother’s ice cream! It’s a catchy tune, and it’s easy to catch onto the chorus but still feel like it’s a real song because it has two verses, a bridge, and a chorus, and therefore provides more variety for you when it’s stuck in your head for eight hours.

This is essentially the funniest theme song you’ll find, especially if you pay close attention. For example, a woman comes to the door looking (and sounding) like Fran Drescher, and Sheffield’s first response is to trust her with his children. And the lyrics tell us it’s because “she was there,” which is just hysterical. Also, they say “watch out CC,” but it’s abundantly clear that Sheffield couldn’t care less about CC. And then they call her “flashy,” which I would assume in theme-song speak actually means “slut-tastic.”

Fun fact: It actually took me up until about five years ago (and by five years ago, I mean five months ago) to realize the first line of this song says “Flushing, Queens”.

This show, which launched the careers of Jennifer Love Hewitt and Matthew Fox, won the Golden Globe for Best Drama in 1996. The theme song, performed by the BoDeans, captures the essence of teenage angst. Misunderstood and “unique,” just like everyone else, teenagers completely identified with the song, and it is likely the band’s most popular song to date. Outside of the world of high school, and the orphaned Salinger family, the lyrics really do have a resonance that should not be overlooked—and could potentially be looked to in the arguments for marriage equality, among other things.

Of course. Who could ever leave Full House out of any collection of “things that defined the 90s”? Mary-Kate before she was anorexic and dating a man who could be her father, Bob Saget as the wonderful family man rather than the raunchy comedian, John Stamos looking gorgeous as always, and Dave Coulier in the only role anyone remembers him by. It starts out with the typical “back in my day” rant about “predictability,” but it all seems so much more bearable when sung over the image of the Painted Ladies and a picnic and riding around in a convertible. And then it says, “when you’re lost out there and you’re all alone, a light is waiting to carry you home” and you tear up because you want to come home to the Tanner household*.

The main reason I love Netflix is that I can skip over this opening song when I watch episodes of “Dawson’s Creek.” It’s kind of the worst song ever written, but it’s also truly one of the greatest theme songs. First of all, it makes no sense — it’s about a woman who gets pregnant in World War II and then the father goes off to war. It has absolutely nothing to do with James and Katie and Michelle in the throes of their adolescent awkwardness. Secondly, everyone knows it. The “opening up your morning light,” the “doo doo doooooo,” and the “I don’t want to wait” … hearing any of those will spark of chorus of reminiscing by everyone in the vicinity.

“In West Philadelphia born and raised…”

It’s stuck in your head now, isn’t it? You’re finishing the lyrics … imagining the aunt shaking her finger in your face … Will Smith getting out of the cab and spinning his head around after he rings the doorbell…

That’s the magic of this theme song. It’s universally loved and easily memorized. It made both the underprivileged and the affluent African-American families familiar to households across America. It brings you images of The Carlton, which everyone loves both because it’s hilarious and because it makes them feel better about their own dancing. It’s catchy, it’s inescapable, and it’s a really excellent way to decide if someone is worth your time — if they don’t know the Fresh Prince theme song, don’t talk to them — you don’t need that negativity in your life.

Bonus points if they know the full version of the song, though.

Duh. Did you think the number-one spot would go to anyone else? The show defined a generation. It gave everyone a new version of the American dream — single, living in New York, apparently able to afford an apartment on the salary of a waitress/masseuse/chef/paleontologist/unemployed actor/”transponster.” It made Jennifer Aniston into America’s Sweetheart. It gave us the “Rachel” haircut that was so loathed by its namesake. And of course, it gave us this overplayed, cliché theme song that can never be forgotten. The unbreakable friendships that they showcased were the true epitome of loyalty and love. And aside from all that, it’s one of the top-10 funniest shows ever created.

I have no interest in the Blossom theme song, but everyone deserves to see Joey Lawrence in leather and feathered hair and Amy Farrah-Fowler in tights and the infamous floppy hat attempting to dance.