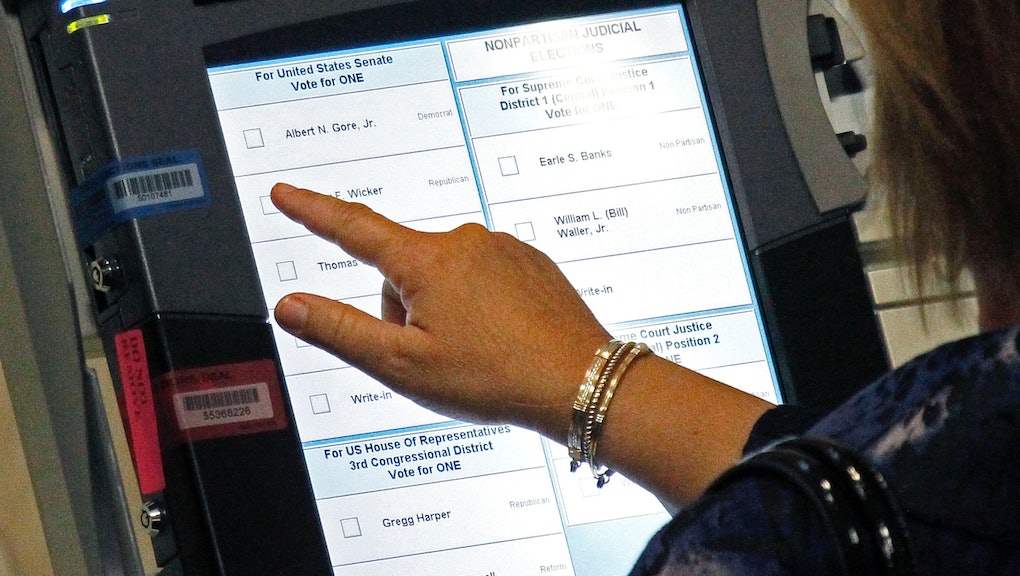 Inside the Newest Battle to Crush Voter Rights

This is a case of states using the Tenth Amendment with the intent of disenfranchising voters instead of providing them with protections. It is an utter waste of time and resources and is in direct contravention of the protections afforded in the Fourteenth Amendment.

Both Arizona and Kansas are reacting to the Supreme Court’s ruling in Arizona v. Inter Tribal Council, the legal battle over the state's 2004 voter ID law (known as Prop 200). Although the Supreme Court's ruling was considered a blow to Prop 200, officials in Arizona and Kansas have taken solace in the fact that the ruling explicitly referred to “federal registration forms.” Kansas State Election Director Brad Bryant expressed the argument that this would allow for states to exclude voters from all but federal elections.

“As the Supreme Court made it clear, its decision applies only to ‘federal registration forms’ and covers only federal elections. States remain free to require proof of citizenship from voters who seek to also vote in state elections.”

Section 1 of the Fourteenth Amendment makes a clear distinction between the words “citizen” and “person.” You can be a person within the U.S., but not a citizen. The amendment states, “no state shall make or enforce any law which shall abridge the privileges or immunities of any CITIZEN of the United States; nor shall any state deprive any PERSON of life, liberty, or property, without due process of law; nor deny to any PERSON within its jurisdiction the equal protections of the laws." So here is the highlight: If you are a citizen, no state can mess with your privileges or immunities. If you are a person in the U.S., no state can mess with you without due process or equal protection.

Here, we are talking about voting, something that is a right. The Supreme Court’s decision concerning Prop 200 does not explicitly command the states to respect the rights of citizens/persons without due process and equal protection, because the Fourteenth Amendment already commands this. Citizen or person, due process or equal protection is guaranteed. The U.S. Constitution is the supreme law of the land and it is pitiful that politicians want to focus on trying to find ways to circumvent it.

Consider this example from an Atlantic article about instructions to a house-sitter: "Don't let the dog out at night. Don't feed the dog dry food." The homeowner returns six weeks later to find the dog dead of starvation. The house-sitter explains, "You never said there actually was a dog or that if there was one I should feed it, just that I shouldn't let it out or feed it dry food. I did neither."

Would that explanation satisfy the owner?