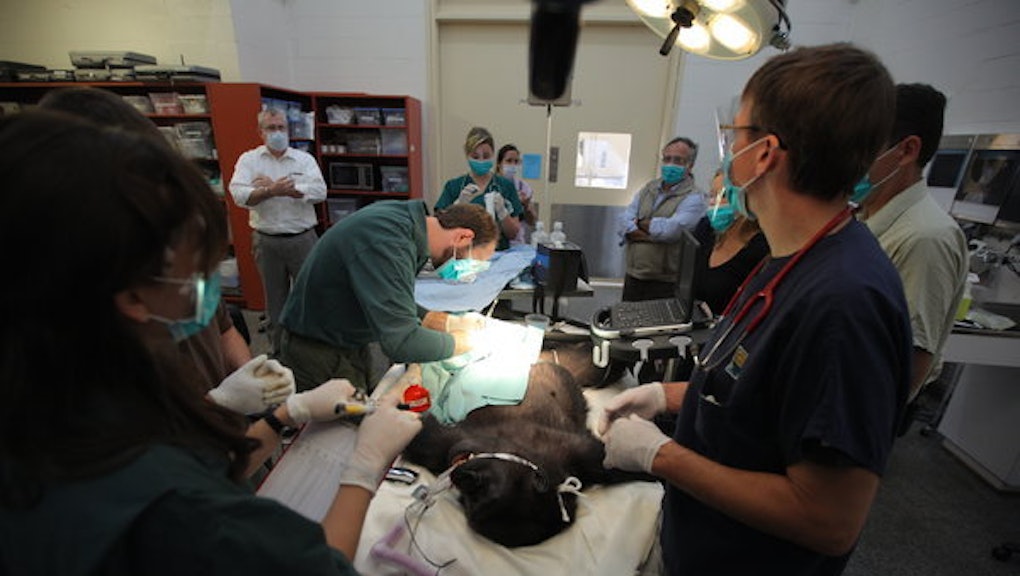 While Americans are trying to get their heads around the ever-crashing Obamacare website for basic health insurance, a 180-pound gorilla is getting VIP medical treatment at the Bronx Zoo's health center.

23-year-old Holli is recovering from an abdomen operation by surgeons flown in specially from Mount Sinai. Last September, she was relaxing in her private crate, watching a monitor play BBC's Planet Earth series. Containers nearby offered kale,  cherry tomatoes, green beans and sunflower seeds to munch on. Holli also had a splotchy get-well card painted by two other gorillas (with help from the animal keepers) taped to the wall.

Holli, one of the 18 gorillas at the New York zoo, showed a loss of energy and appetite earlier this summer. For several weeks, she had 24-hour veterinary care, CT scans, blood tests, and an ultrasound, which revealed a deep abscess in the her abdomen.

Since a gorilla's anatomy is more similar to that of humans than to cats or dogs, the veterinarians decided to call for help from a team of surgeons. Dr. Stephen R. Gorfine and his associates arrived from Mount Sinai on September 6, not too sure what they were in for. "I was expecting an 800-pound gorilla," Dr. Gorfine said. "They said there's no such thing as an 800-pound gorilla." (The zoo's largest gorilla is an adult male who weighs 450 pounds.)

After flipping through a faded book on gorilla anatomy, the team headed to the operating room to remove part of Holli's colon. "We didn't know what to expect," Dr. Daniel A. Popowich, Dr. Gorfine's partner, said. "Once we got inside, it was all the same. You'd think it was a human."

Now if only Holli would show more human sense when taking her antibiotics, instead of stubbornly spitting them out. The animal keepers finally got her to swallow them by hiding the pills in peanut shells, between the peanut halves.

Other animals are getting some nice free treatment at the health center, including a newborn red panda, some Fennec foxes, a blind goat, and a South American capuchinbird with "feather issues." It would be good if humans had free medical care as well.