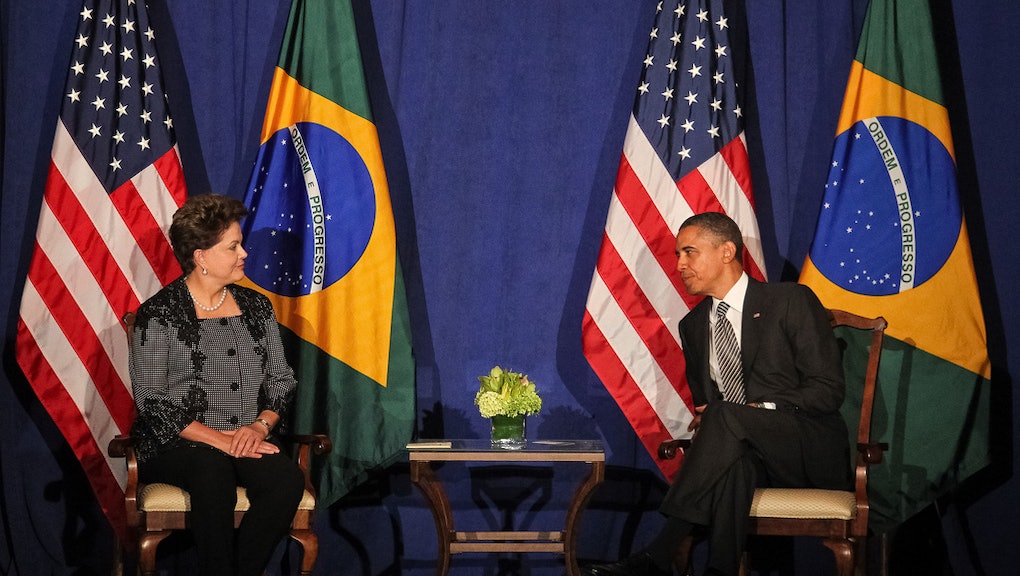 Brazil Tries to Beat America's NSA, As Things Heat Up Between These Allies

The National Security Agency’s surveillance programs and the United States' government shutdown are damaging political and economic relations between the U.S. and Brazil. Here’s how.

Brazil, perhaps one of the United States’ most important allies in Latin America, announced on Monday that it would develop an email system intended to shield the NSA from spying on its government.

The Federal Data Processing Service (SERPRO), which will be tested for installation at the end of October, was created after whistleblower Edward Snowden leaked slides that show the NSA was monitoring the Brazilian government’s communication systems without permission.

“Tampering in such a manner in the lives and affairs of other countries is a breach of international law and, as such, it is an affront to the principles that should otherwise govern relations among countries, especially among friendly nations,” Rousseff told world leaders.

But the blows to diplomacy don’t stop there.

Even though Brazil has experienced a surge in its real currency because of speculation that the ongoing government shutdown in the United States could inject low-cost cash into emerging markets throughout the world, Brazil — along with many other major American trading partners — remains concerned about the possibility of a default on loans sponsored by the U.S. government and the collapse of Treasury bonds.

Consequently, Brazil could seek to move many of its trading enterprises to other countries with powerhouse economies, like China, that are not facing tenacious threats of economic instability. This scenariowould redirect the Brazil's political and diplomatic allegiances toward foreign countries.

Ultimately, the Brazilian government remains indignant over the NSA’s surveillance scandal and fearful that United States’ government shutdown could hurt its own economy, creating cracks in the pillars of diplomacy that sustain U.S. and Brazilian relations.