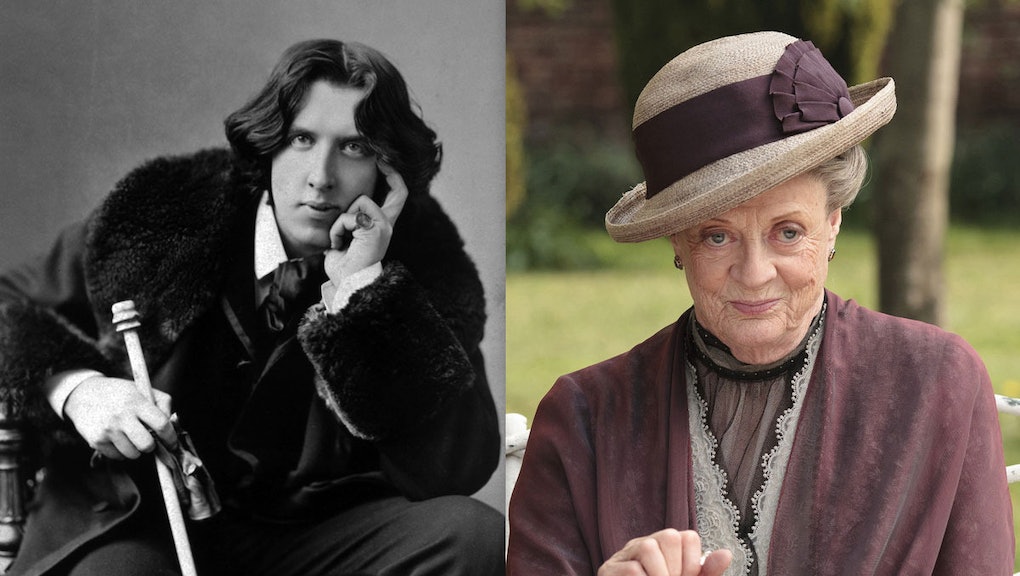 Who Said It: Oscar Wilde or the Dowager Countess of Grantham?

Oscar Wilde (née Cockburn) is famed for his sly witticisms and thoughtful musings. In honor of his 159th birthday today, we’ve mixed up some of his quotes with a couple zingers from Downton Abbey's sassiest matriarch, the Dowager Countess of Grantham.

Put your knowledge of Wilde, Downton, and inspirational Pinterest boards to the test by identifying which quip master said each of the following.

When you think you've figured it out, hover over the image below the quote to see the answer.

1. "The truth is neither here nor there. It's the look of the thing that matters."

2. "Life is a game, where the player must appear ridiculous."

3. "A thing is not necessarily true because a man dies for it."

4. "Never look as if you disapprove."

6. "To live is the rarest thing in the world. Most people exist, that is all."

9. "Vulgarity is no substitute for wit."

10. "Fashion is a form of ugliness so intolerable that we have to alter it every six months."

11. "Work is the curse of the drinking classes."

15. "No guest should be admitted without the date of their departure being known."

18. "Everyone goes down the aisle with half the story hidden."

20. "I see when men love women. They give them but a little of their lives. But women when they love give everything."

21. "When tragedies strike, we try to find someone to blame. And in the absence of a suitable candidate, we usually blame ourselves."

22. "No Englishman would dream of dying in someone else's house."

23. "Every saint has a past, and every sinner has a future."

24. "Things are different in America. They live in wigwams."

25. "Anybody can be good in the country; there are no temptations there."

26. "I was very much disappointed in the Atlantic Ocean."

27. "One can’t go to pieces at the death of every foreigner. We’d all be in a constant state of collapse whenever we opened a newspaper."

28. "America is the only country that went from barbarism to decadence without civilization in between."

29. "Life is never fair, and perhaps it is a good thing for most of us that it is not."

Just kidding, who could forget this: