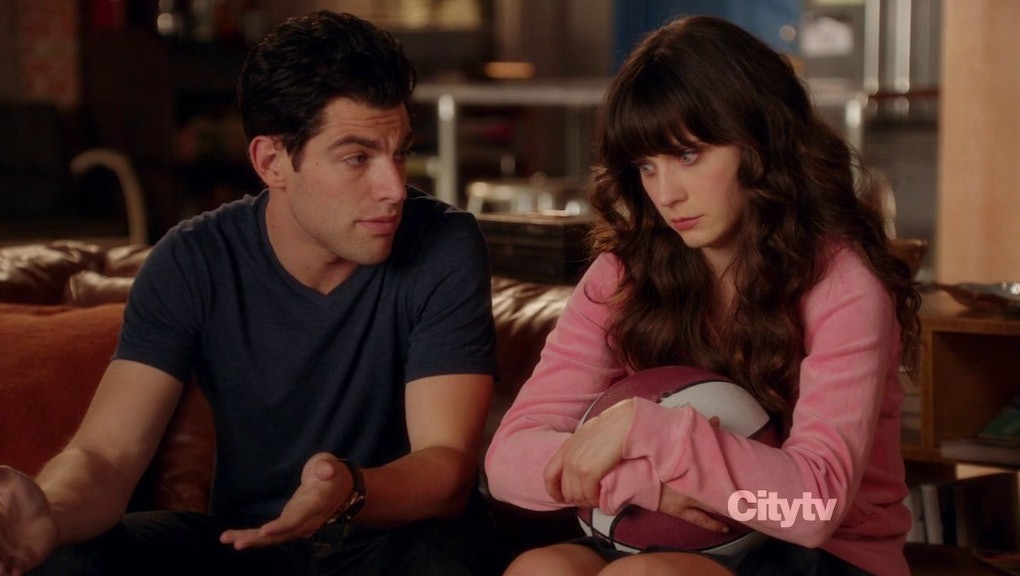 On this week’s episode of New Girl, the theme was personal growth.

Following the Cece/Elizabeth fiasco, Schmidt is desperate to be reassured that he is, indeed, a good person. He seeks the aid of his rabbi (Jon Lovitz), who advises him to put others before himself.

"This is one of those times I wish I was Catholic," Schmidt quips. "A few Hail Marys and you’re done."

Leaving the temple, Schmidt comes across a bike messenger choking on a piece of gum and performs "Heimlich’s maneuver" on him. He then becomes so overwhelmed by his own goodness that he proceeds to sing Hebrew prayers.

Nick is also challenged to do some growing this week when he inherits $8,000 in cash from his late father (the late Dennis Farina), and starts buying a lot of weird stuff rather than attending to his "secret box," a box that largely contains unpaid bills.

Nick’s box, and the money, was the catalyst for the first legitimate Nick and Jess couple fight. He has his ways of doing things. His way of doing things may be unconventional and often ineffectual, but it works for him. Jess is a fixer. So she proceeds to try to fix Nick’s problems behind his back, using the money he inherited to start paying off some of his bills. Her heart is in the right place, but her actions cross a line, and when Nick finds out, he storms off to the bar to blow off some steam.

Schmidt finds Nick at the bar and advises him to give his money to charity. He is still searching for credit for his good deed, even going to the hospital to insist that the bike messenger tell him he's a good person. When the messenger tells Schmidt that the messenger's roommate was hit by a car while conducting a bake sale for children’s cancer charities, Schmidt concludes that trying to be a good person really isn't worth the hassle. He shares this realization with a bar mitzvah class until the rabbi's goons (I've never known rabbis to have goons, but if ever there were a rabbi with goons, he'd be like Jon Lovitz) have to remove him from the classroom. Hebrew school was never that crazy in my day.

Nick confronts Jess about her interference in his life. As he pitches her vintage purse collection out the window to give her a taste of how it feels when personal space is invaded, the conflict is finally articulated. She needs him to grow. He thinks he's fine the way he is.

"I’m not going to change," he declares, "not for anybody. Take it or leave it."

She writes him a check for the amount she spent on his bills and walks out.

Later, however, while talking to Outside Dave (note to show's creators: more Outside Dave, please), Jess gets a call from the bank. Nick is trying to open an account with her check and a bag of cash.

"I’ll do anything for you, Jess," he tells her.

She’s touched. So touched that she bitches out the teller about an $8 processing fee, and proceeds to go on a rant about how she "understood at least 30 percent of the financial crisis," concluding with "you suuuuck," all for Nick. Growth may happen slowly, but it seems it does happen.