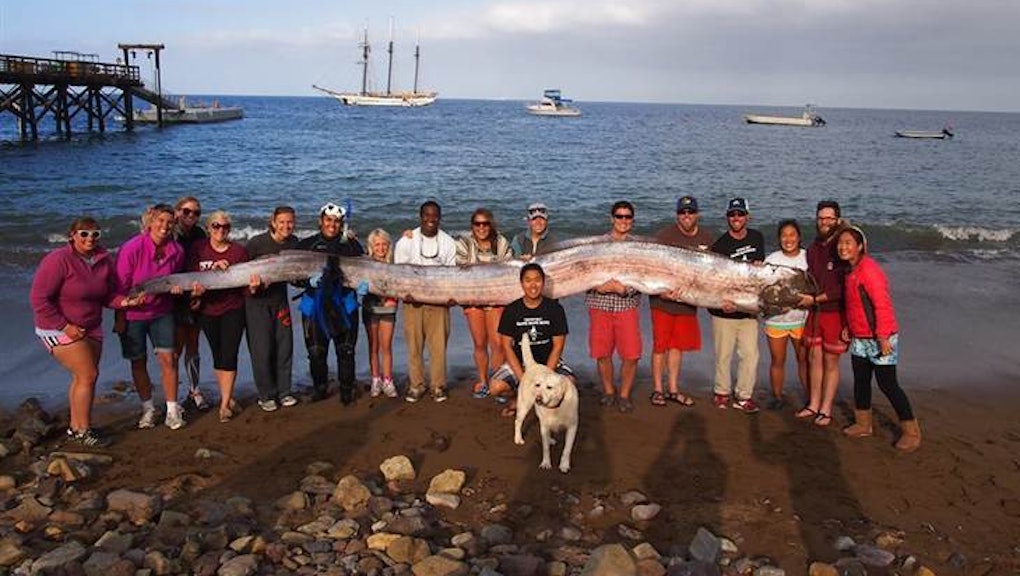 Gigantic Sea-Serpent Fish Pulled Out of Ocean in California

What would you do if you saw an 18-foot oarfish while snorkeling in the Southern California coast? Would you freak out and freeze? Or swim away from it as fast as you could?

That's exactly what happened to Jasmine Santana at the Catalina Island Marine Institute (CIMI). And she decided to bring it to the shore with her. Santana initially approached "with care," but realized the fish was dead. "I have to drag this thing out of here or nobody will believe me," she reportedly said.

See the freakish fish below:

Despite holding the world's longest bony fish title (it can grow as long as 56 feet), oarfish goes largely unattended because of its habitat. "It is believe that oarfish dive over 3,000 feet deep," CIMI reportedly said. As a result, "little is known about their behavior or population" and when they do float to the surface, it's usually because they are injured or already dying.

Earlier this year, however, a footage from 2011 was released which scientists believe to be the "first-ever" clip of living oarfish in the wild. With information building up, year after year, only time will tell if oarfish is indeed living Nessie.