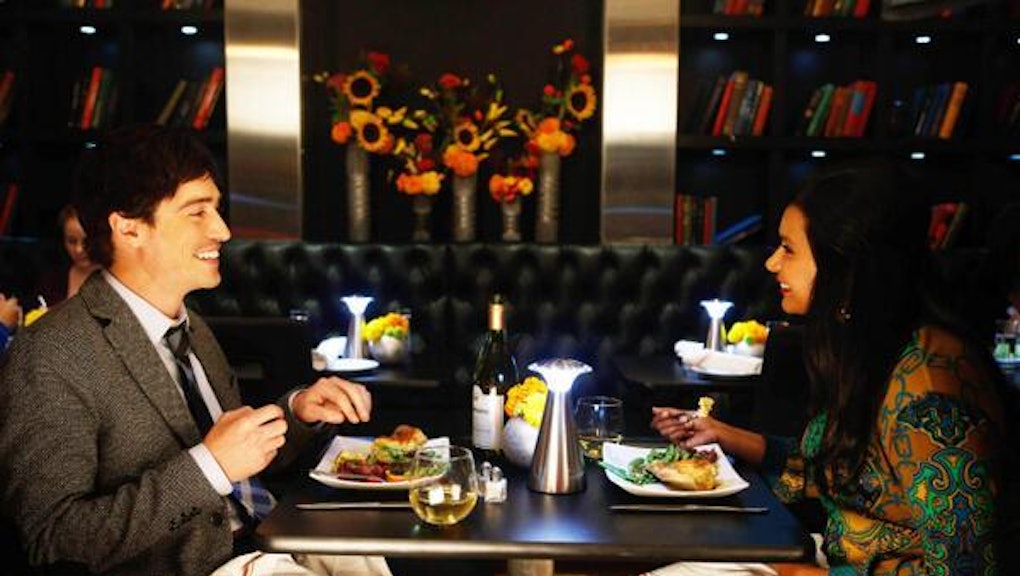 The sharp and hilarious episode began with Mindy hailing a flight attendant because her personal television is broken and, as she puts it, "I cannot be left alone with my thoughts!"

After the broken TV tragedy, Mindy has the good fortune to sit next to the cute, smart Jason on the plane. Jason asks her out, and they eventually go on a date to see an artsy movie and have dinner together.

As somebody who has never actually seen a person that I met on an airplane again, I am impressed by her chutzpah.

Over their dinner date, we learn that Jason is an Arts and Culture writer for a fictional (but realistic) New York intellectual paper. Jason has very highbrow taste in music and movies, in contrast to Mindy, who prefers listening to One Direction and watching romantic comedies starring Rachel McAdams.

I would like to add that as somebody who grew up in Seattle, there are totally redeeming aspects of hipster culture, but having to see "artsy" movies is not one of them. Though not the case for all such movies, many of the ones I've been exposed to usually need more dialogue, or a discernible plot.

At the end of the date, Mindy asks Jason if he wants to come up to her place. Jason is down to get down, but surprised that Mindy has offered since they clearly have nothing in common and thus no future. He is dumb enough to tell Mindy this, which obviously offends her deeply. Needless to say, Mindy rescinds her offer.

Meanwhile, Danny discovers that his ex-wife, Christina, is putting up an exhibition of naked pictures she took of him while they were together. Danny calls in the hot lawyer from the last episode to provide legal advice. The lawyer explains to Danny that, since he signed a release, he has no legal rights to shut down the exhibition. The lawyer also tries, and fails, to explain to Danny that he specializes in divorce law. When they first find out about the exhibition, the office quickly nicknames the exhibition "Wiener Night" and resolves to show up en masse to mock their coworker.

Mindy decides to show Jason how cultured she is by inviting him to an art exhibition starring her coworker, Danny. This backfires because she then has to make conversation about the exhibition and ends up embarrassing herself in front of Jason.

This exhibition gives us the opportunity to see more of Danny (literally), who has too often been relegated to the background with the rest of the office cast.

At the end of the episode, Mindy comforts Danny before releasing him to the romantic attentions of a woman who enjoyed the nude pictures. While I’m sure many show watchers are rooting for Danny and Mindy to end up together, I appreciate that the show is letting them be friends for now.

Mindy finishes her evening with the intellectual Jason, who apologizes for being pretentious by singing her a Katy Perry song on a ukulele. The Mindy Project: proving that pop culture wins out over pretension every time.

Mindy is fairly tame this episode, except for the part where she accidentally Instagrams a photo of her chest.

Tonight we really hit the jackpot with guest stars. Kevin Smith made a cameo on the plane and Chloe Sevigny returned briefly as Danny’s angry ex-wife. We even got a few moments with the midwife Brendan and plenty of screen time for Mindy’s romantic interests, the divorce lawyer (Glenn Howerton) and Jason (Ben Feldman).

Morgan and Peter were relegated to the group cast this week, which makes me sad because I enjoy their one-liners. Tamra is growing on me, but poor Betsy really must go. Maybe next time.