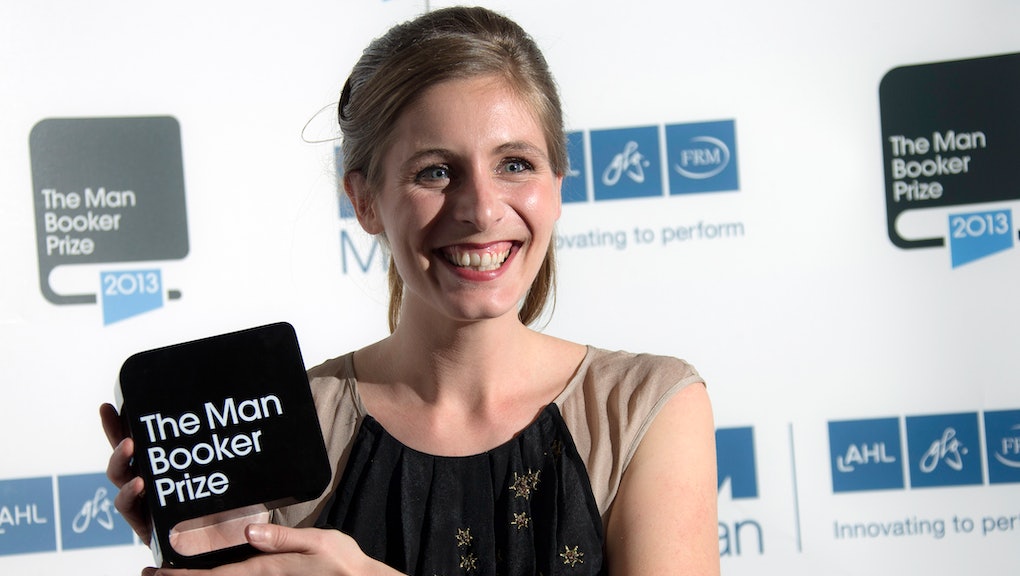 A 28-Year-Old Won the Man Booker Prize, What Did You Do Today?

Canadian-born, New Zealand-raised author Eleanor Catton made history yesterday by being the youngest person ever to win the Man Booker Prize for her novel, The Luminaries. She is 28. Reporters from the New York Times and the Washington Post have already commented on Catton’s maturity, as evidenced by the intricacy of her book's 832-page plot centering on a murder mystery in the gold mines of 1860s New Zealand.

But her literary success has not come easy. In an interview with The Guardian this morning, Catton stated that, "People whose negative reaction has been most vehement have all been men over about 45." She brushes off the nasty remarks with composure and insisting that her age is simply an "uninteresting" and irrelevant fact — like the fact that she is right-handed — having nothing to do with the contents of her novel.

I would like to suggest, on the contrary, that age is an important factor in her story. In fact, Eleanor Catton's winning the Man Booker Prize is proof that millennials still read, write, and care about literature. We’ve been told that we have short attention spans, that all we do is tweet, blog, text, and watch Gossip Girl, but in reality, millennials are reading books by young authors now more than ever. This study by the Pew Research Center indicates that Americans between the ages of 16-29 are going to libraries just as often as people who are 30 and older, and are much more likely to make use of e-resources. Not surprisingly, millennials are also more inclined to read e-books on their iPads or tablets. They’re simply more convenient to carry around — not to mention eco-friendly. All of this suggests that millennials are in fact very literate and very much interested in literature.

Millennials are also not as young as other people think we are. I grew up in the 90s. I was a pre-internet, pre-cellphone kid who went to bookshops and listened to author readings frequently after school. For many of us 20-somethings, books still hold a place dear to our hearts. As a writer from USA Today explains, "books can’t become outdated" and, unlike an e-reader, "you can cherish a physical book." The fact that we still love to read books is partially hard to believe because young authors are still such an under-represented group. Because of that, I hope that young established authors like Eleanor Catton will speak up more not only about their influence on the literary scene in general, but also on what their novels mean to millennial readers.