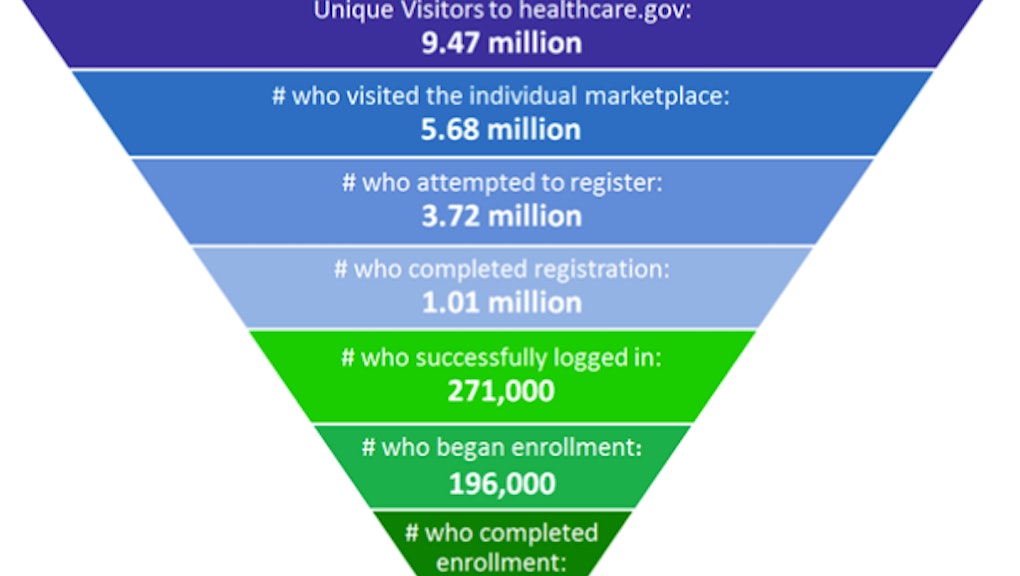 This Obamacare Enrollment Graph Could Be the White House's Worst Nightmare

How many people have enrolled in the new Obamacare exchanges so far? It depends on who you ask, since the White House has yet to release any official numbers (they've had to furlough critical staff).

According to industry analyst Bob Laszewski, "Not more than about 5,000 individuals and families signed up for health insurance" through healthcare.gov as of last Monday. According to CNN, the "glitch-plagued rollout" makes impossible to know the exact number, either because it is "embarrassingly low" or because insurance companies say they are receiving data from the administration that is "incomplete, duplicative or contradictory."

But this hasn't stopped market research firm Millward Brown Digital (aka internet website pageview ranking site Compete) from crunching some numbers of their own and creating this chart which — if even close to being accurate — could be the White House's worst nightmare:

Very important note: Compete's data is not as accurate or reliable as Google Analytics, Quantcast, or Omniture. Compete does not have a tracking pixel on healthcare.gov (at least one that's visible in the source code) and therefore is doing its best to estimate clicks based on its software. To give you an idea of how inaccurate Compete sometimes is, Compete says that PolicyMic.com has ~1M US monthly unique visitors. Quantcast and our internal Google Analytics, which both have tracking pixels on our site, put that number much closer to 5 million US monthly unique visitors.

According to Millward Brown Digital, over the course of Obamacare's first week, out of 9.5 million people who visited healthcare.gov only 36,000 (or 0.4%) were able to successfully complete enrollment. From their study:

Among the visitors to healthcare.gov, 5.7 million (or 60% of total visitors to the site) navigated to the individual marketplace landing page where, after selecting their state, they were either directed to continue using the federal site or were redirected to their state-run exchange. From here 1.3 million left for their state-run exchange, while another 3.7 million attempted to register on healthcare.gov. The latter didn't get far. For two thirds of these consumers, the site either hung or failed altogether before it was finally taken offline over the first weekend.

It all went downhill from there for these eager early-adopters; over 196,000 users began the enrollment process but the majority stopped "well short of completion" — due to technical issues, lack of the time or information. In the end, says Compete, just 36,000 consumers, or 1% of all those who attempted to register for the federal exchange, successfully enrolled in Obamacare.

If Compete is even directionally right, healthcare.gov is having major user conversion issues.