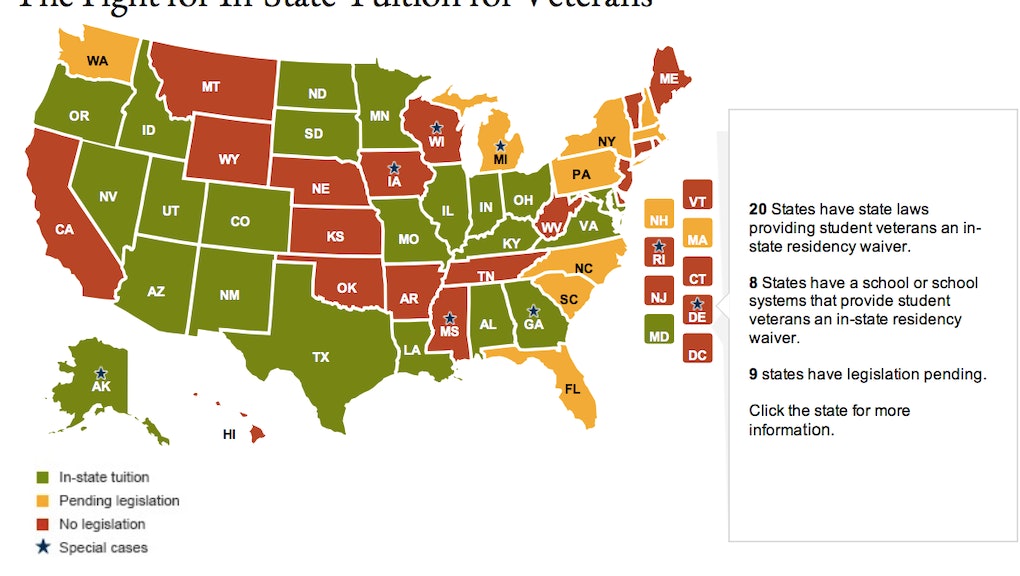 Which States Are Best For Student Veterans? Check This Map

Military veterans seeking to maximize their hard earned education benefits, namely the post-9/11 GI Bill, now have an interactive map showing which states, colleges, and university systems offer in-state tuition to veterans. However, the recent announcement by three prominent veteran groups — The American Legion, the Veterans of Foreign Wars (VFW), and Student Veterans of America (SVA) — was drowned out by the government shutdown.

Veterans have diverse and unique experiences that can significantly enrich a classroom —  it is in the best interest of many that their access to education is prioritized.

The importance of this resource cannot be overstated. With the rising cost of higher education in the U.S., veterans should be mindful of how to get the most out of the GI Bill. Moreover, the post-9/11 GI Bill pays the highest in-state tuition and fees. By leveraging resources like this map, student veterans may be able to navigate higher education with little to no debt.

Additionally, the complexity of how residency status is extended to military veterans and other GI Bill beneficiaries varies by state. Family members of veterans using the new post-9/11 GI Bill and veterans no longer eligible for the GI Bill may find greater benefits at public colleges and universities in other states.

Take Michigan as an example. While the state of Michigan has pending legislation to grant residency waivers to veterans, the University of Michigan board of regents recently voted to extend in-state tuition to all veterans. Several other public schools, including Washtenaw Community College, extend the residency waiver to veterans as well. However, these institutions of higher education may be special cases within a state still debating legislation that would grant in-state tuition to veterans at all public colleges and universities. In comparison, North Dakota grants residency status to veterans, dependents, and spouses eligible for the post-9/11 GI Bill and under other unique cases. State by state, and school by school, in-state tuition for veterans and their families varies.

On the national level, two separate bills, H.R. 357 and S. 944, have moved out of the Senate and House committees responsible for veterans’ affairs. A floor vote in both chambers has been delayed likely due to the government shutdown and debt ceiling debate. Whether they are taken up in this congressional session remains to be seen. Regardless, both bills have some key differences. Even if passed, the compromised version of both bills would likely not go as far as some states. Essentially, the virtual map would remain relevant for veterans and family members seeking to stretch their GI Bill dollars.

Even with the new post-9/11 GI Bill, the rising costs in higher education and additional demands of being an adult student make in-state tuition for veterans an important factor in choosing a college. In a survey conducted by RAND, 78% and 64% of student veterans at public two-year and public four-year institutions respectively noted financially supporting self and family as a moderate or major challenge. Granting residency waivers to veterans not only addresses the barriers of access and success for veterans in higher education, but it also benefits the campus culture.

Veterans are diverse and bring world views that enrich the college classroom and the campus environment. Public colleges and universities should be vying for this unique population, and ultimately those schools granting in-state tuition to veterans will benefit.