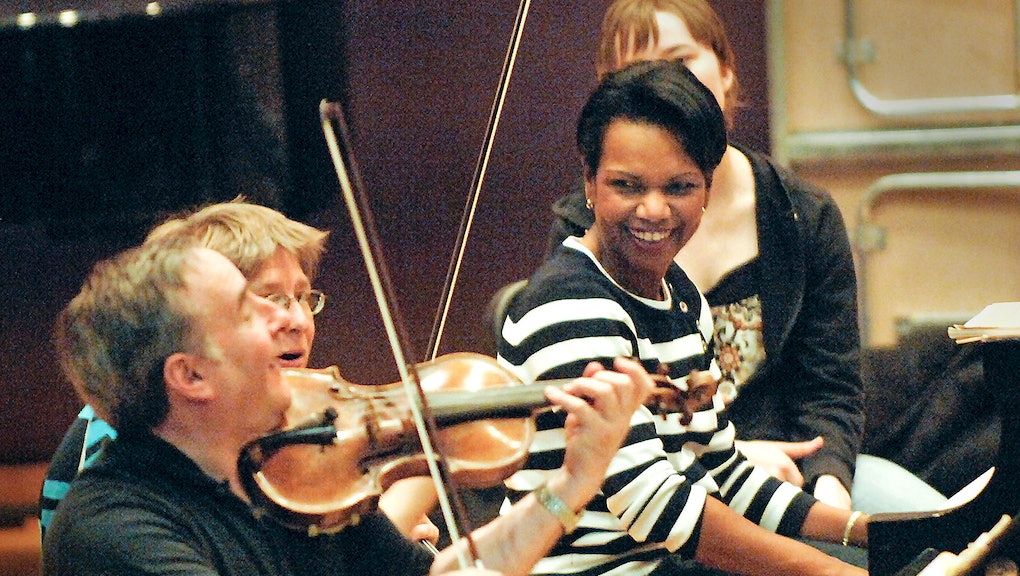 Is music "the key" to career success? Not likely. Although a provocative New York Times article argues that childhood music lessons equate to future leadership, it seems more likely that music is simply beneficial to childhood education, rather than a magic bullet to the top.

Earlier this week, theTimes ran an article clearly designed to hit its "most-emailed" list, called "Is Music the Key to Success?" Its argument was fairly transparent: List a number of famous business and political leaders who also studied music (Condoleezza Rice and her training as a concert pianist being the classic example), cite a few stats about music's ability to teach discipline and self-mastery, and conclude that all parents should ensure their kids take piano or violin lessons, just to give them that extra leg up in their future careers.

The argument has a few flaws.

For starters, the list of musician/leaders the NYT presents does not include a lot of good role models. Condoleezza Rice, Alan Greenspan, Woody Allen, Bruce Kovner — they could have retitled the article, "Is Music the Key to Ignoring Others and Acting on Your Own Self-Interests?"

(That quote actually comes from former World Bank President James Wolfensohn, who cites his cello practice and group performance as the source of his ability to understand "the culture of people, as distinct from their balance sheet.”)

So what does the article tell us? A few things that are reasonably true: Children who study music gain skills in discipline and focus. They learn how to practice something until it is perfect, they learn how to stand in front of an audience and present something, whether as a solo performance or as part of an orchestra — and yes, they also learn teambuilding skills.

Music education provides young people with key educational gains in language skills, hand-eye coordination, spatial reasoning, mathematics, and critical thinking. Music education literally changes the brain, by encouraging new neuron growth. But does it correlate with increased leadership? What about all the classically trained concert pianists who didn't grow up to be Condoleezza Rice, or the amateur clarinetists who didn't grow up to be Woody Allen?

It seems, like always, that the true measure of career success is the complicated cocktail of innate ability, outside privilege, networks and connections, and occasional luck. The fact that so many famous leaders also play instruments has less to do with the instruments than that they grew up in the types of households that could include a grand piano or cello, and that understood the value of music education as social signifier as well as neuron-constructor.

So with that in mind, yes, music education is important for all children. As schools continue to strip music and other arts out of their newly created Common Core classrooms, parents will need to turn to online tutoring resources like TakeLessons and after-school youth orchestra to help ensure their children get the educational benefits that previous generations got during the school day.

But you can't expect a few years of clarinet lessons to turn your child into the next Woody Allen. (Nor, I hope, would you want your child to follow that path.) Instead, parents and children both will need to understand that career success is based on many additional factors, many of them outside any one person's control, and that it's going to take more than music itself to succeed in our new and complicated world.

Is music the key to success? No. But it's still a fundamental part of human culture, it still provides significant mental and social benefits, and it is still an important part of childhood education.