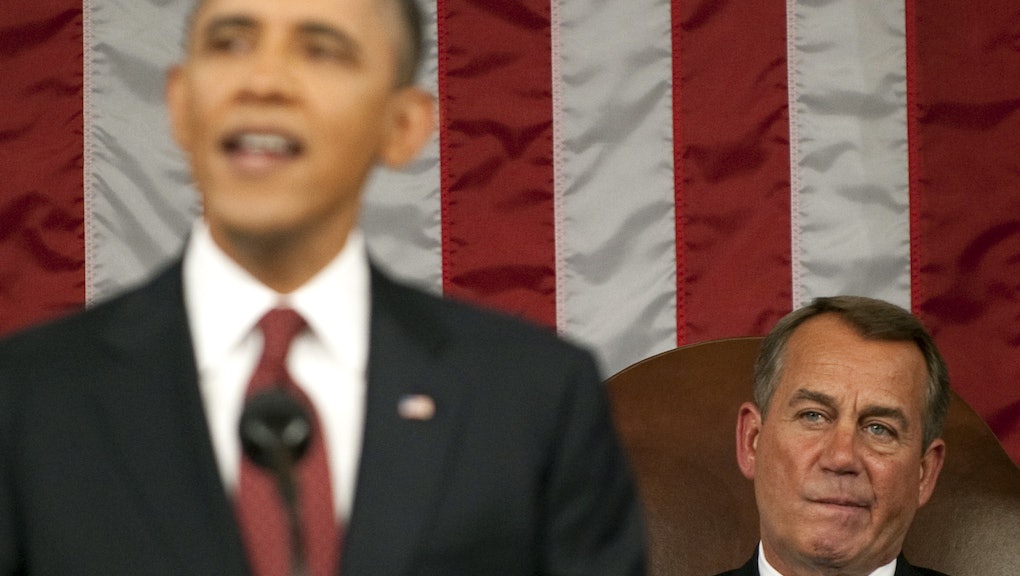 The Hostage-Takers Just Lost Everything

After nearly 17 days of shutdown costing the American economy roughly $2.4 billion, the Republicans in the House have decided that they’ve had enough and are ready to accept what the rest of us knew to be true weeks ago — that shutting down the government for no reason and with no exit strategy was a political suicide mission.

Speaker of the House John  Boehner (R-Ohio) and his cohort of conservative nutbags and Tea Party lunatics caved completely, agreeing to re-open the government and raise the debt ceiling with no strings attached.

That’s right — Republicans, who started with demands for a full repeal of the Affordable Care Act (for a 42nd time), then shifted to a year long delay of the individual mandate, then settled on just trying to screw over their personal staffers, eventually walked away with effectively nothing to show for it (besides the lowest public approval ratings for the GOP in the history of public approval ratings of course).

The fact that the GOP walked away from their ransom efforts without even a tiny concession (like a repeal of the medical device tax, an issue that has bipartisan support in both chambers) speaks to the true level of their failure.

This failure, however, is a good thing. Probably not so good for Republicans (though to be fair, they brought it upon themselves), but it is an important milestone in the recent history of our Republic.

At the outset of this lunacy nearly three weeks ago, President Obama made clear that he was done letting Republican extremists manufacture crises to extort policy outcomes, as they had done numerous times since their ascendance to the House in 2010. “The American people do not get to demand a ransom for doing their jobs,” said Obama. "We can't make extortion routine as part of our democracy."

Part of the enabling force driving Republican extremism was the fact that, in every previous encounter ranging from last year’s debt ceiling fight to January’s fiscal cliff, Obama and the Democrats caved to Republican demands in the 11th hour. The White House understood that if it hoped to move any semblance of meaningful legislation in the last two years of Obama’s presidency, it had to turn back the tide on governance by crisis, and it had to do it fast.

Obama and the Democrats drew a line in the sand on this shutdown, declaring that they would not come to the negotiating table with a gun to the head of the American economy. Understandably, the Republicans didn’t believe them, deciding to pull the trigger on the first government shutdown in 17 years on the assumption that Obama and company’s stomachs would be too weak to cross into the abyss with them. They were wrong.

The problem for Boehner was that he realized the gravity of his mistake well before his caucus did. Yet, even after realizing his mistake, Boehner unforgivably prioritized bringing peace to the internal politics of the Republican caucus over funding the government. While young mothers living in poverty were denied nutrition assistance for their children, Boehner wrestled with Tea Party firebrands who called accepting the budget bill they themselves had proposed in July “unconditional surrender.” It wasn’t an enviable position to be in, but Boehner handled it poorly and his party paid the price.

Obama knew it, too.

Speaking from the White House Wednesday night, Obama said that, “one of the things that I said throughout this process is we’ve got to get out of the habit of governing by crisis.” When asked whether he thought we’d have to do this all over again in January, the president responded clearly, “no.”

He’s right. The politics of crisis, such as they were under the tumultuous tyranny of the Tea Party minority, have peaked and come to an end. Obama’s consistent refusal to negotiate with the hostage-taking fringe of the Republican party demonstrated that, when push comes to shove, the politics of full-blown scorched-earth brinksmanship will cost un-stomachable political blood and treasure.

True, we may potentially go through this whole ordeal all over again in January and in February, but I doubt it. The House voted to re-open the government and raise the debt ceiling by a 2-to-1 margin last night, forever burying Boehner’s claims that he didn’t have the votes and laying bare the truth that he was simply scared of the far-right bomb throwers in his own party. Boehner will spend the next few months licking his wounds and the GOP leadership will know better than to let Senator Ted Cruz (R-Texas) and his cadre of kool-aid drinkers off their leash.

Republicans understand that the Tea Party’s shenanigans may have already cost Republicans the Senate (for the third cycle in a row). Another showing like this and it may even cost them their gerrymandered House. If the Republicans still can’t figure it out, the voters will figure it out for them in 2014.

While raucous and economically destructive, the silver lining in this shutdown crisis may be that the Tea Party has finally overplayed the hand they’ve been bluffing since 2010. With the American people and senior leaders in their own party turning against extremists attempting to govern by extortion, we may finally see a return to some semblance of regular order as our politicians do what we elect them to do — govern.