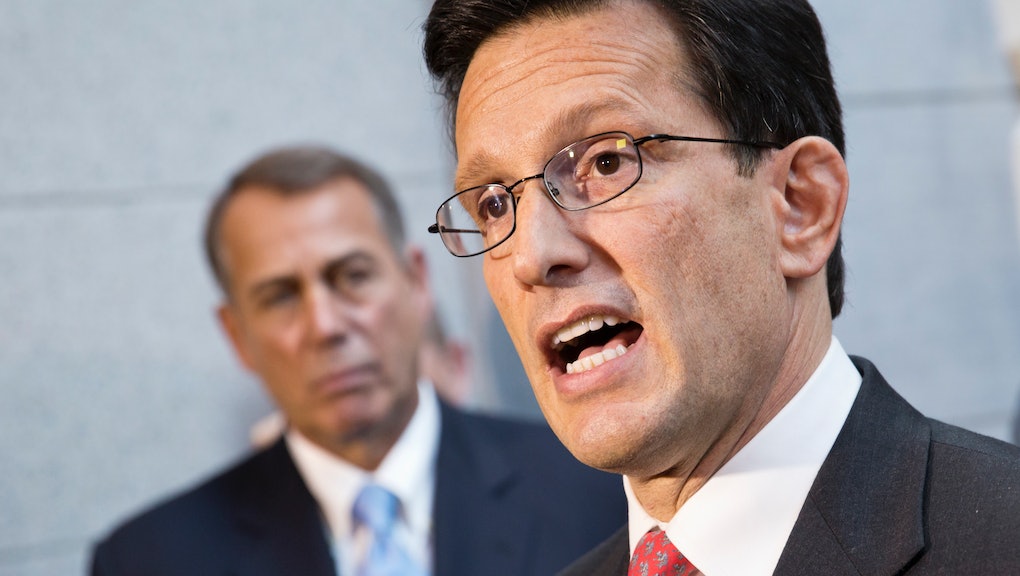 The debacle is finally behind us. The blame game continues, though, as the conservative wing of the Republican Party is repeatedly singled out for blame. Right-leaning perspectives, chronically underrepresented in the mainstream media, deserve to be heard. A thorough recounting of events demonstrates that the GOP used reasonable maneuvers to demand reasonable requests, but were hindered by opportunistic opponents. To see this, we must start at the beginning.

To the punditry, the failed continuing resolution that led to this mess already catered to Republican demands. They ignore, however, that the “deficit reduction” we put into place through lower spending has overwhelmingly been to the Democrats’ liking. Take the sequester: The bulk of cuts are hitting defense discretionary spending, a Republican sacred cow. Around 30% of the non-defense cuts are devoted to reducing physician reimbursement under Medicare. This is hardly a gift to Republicans, who have spent spent the last few years attacking Democrats for launching a “war on Medicare.” Sequestration, which took a hatchet to defense, cut Medicare provider rates, and exempted large entitlement programs, is an unspoken Democratic victory.

The tax side of the equation is even more telling. The American Taxpayer Relief Act of 2012, which raised rates on income, capital gains, estates, and dividends, was yet another Democratic victory. That’s right, the GOP “anarchists” agreed to $600 billion in tax increases over the next 10 years. And this is on top of the one-trillion-dollar tax increase under the Affordable Care Act, labelled as “deficit reduction” legislation.

Despite these lopsided compromises, the GOP is castigated as too rigid and ideological.

When the continuing resolution to fund the government came to the floor a few weeks ago, the GOP added the infamous “defund Obamacare” provision. Sequestration may have been useful in stabilizing our short-to-medium-term deficit issues, but the long-term threat remains unchanged. Forcibly bringing up the ACA time and time again is useful, since it brings the conversation back to long-term deficit reduction. Our unsustainable expansion in entitlements, exacerbated by the health-care law,will cause serious issues unless addressed. Defunding the ACA entirely is a tactic that has gained little traction, though, so Republicans insisted on a delay of the individual mandate on the eve of the shutdown. Democrats instinctively refused to consider this, and the government ceased to function. Advocates of “Obamacare” were quick to pounce on Republicans, but putting the individual mandate in line with the delayed employer mandate would ensure greater efficiency in the law. In the year without the employer mandate, businesses can’t be penalized for dumping employees onto taxpayer-funded exchanges. Thus, synchronizing the two mandates would shift insurance responsibility from taxpayers to employers. It didn’t take long for the “uncompromising” GOP to yet again water down their proposal, suggesting a House-Senate committee look at long-term spending. This modest idea provided the basis for the current Senate agreement, which also included some ACA verification measures.

Why, though, should a minority party be able to "hold government hostage” if they don’t get their way? We need to consider the specialized functions of our different branches of government. In national defense policy, we recognize that the executive largely sets the agenda. Similarly, the power to initiate and shape the revenue process belongs to the House. As Madison explains in Federalist 58, the House, “can, not only refuse, but they alone can propose the supplies requisite for the support of government. They in a word hold the purse.” We may lament a paralyzed government, but a republic crushed under the weight of insane budget obligations is the true nightmare.

The looming debt ceiling date cast a large shadow over shutdown negotiations, but this was a manufactured crisis. The president arguably has the constitutional authority to raise the debt ceiling under the Fourteenth Amendment, which states that the “validity of the public debt....shall not be questioned.” Congress may have conventional spend-and-tax powers, but making the decision over whether to pay bills already incurred is another, more serious matter. The administration, doubting the constitutionality of unilateral action, immediately took the option off the table. This excuse, though, holds little water — Obama was willing to risk a rebuke from the Supreme Court in signing the individual mandate into law. This time, if the court were to declare his actions unconstitutional, he would at least have bought much more time for negotiation. There was concern over political backlash from taking such a bold move, but the alternative of a financial catastrophe would surely bring more toxic political headwinds. The real reason that the president refused to act on the ceiling was that the “Republicans are playing games with the ceiling” narrative is too politically valuable to throw away.

This probably won’t be our last shutdown-debt ceiling fiasco, but this recent episode is a great learning opportunity. The Senate should carefully evaluate provisions attached to continuing resolutions by the House, instead of automatically rejecting them. Delaying the mandate, after all, should have garnered support from thoughtful advocates of the ACA. Instead of giving markets the perpetual jitters, the president ought to unilaterally raise the debt ceiling in any future mess. In the meantime, we should take the new debt committee in stride, and use the findings to build consensus through even-handed negotiation.