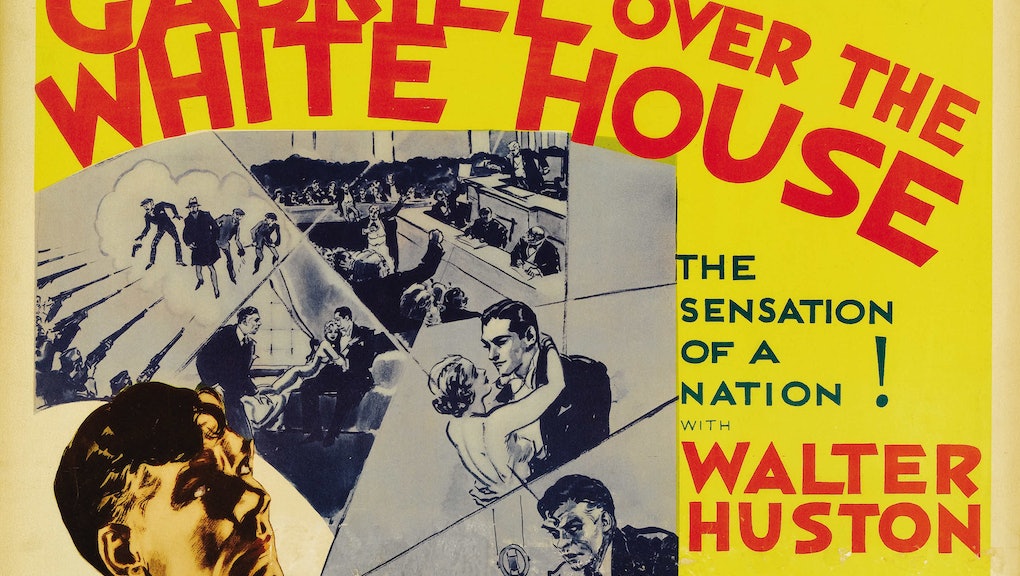 This 1933 Movie Imagined America as a Dictatorship

During the government shutdown, we’ve all read (or written) at least one pithy, facetious comment about getting rid of Congress. It’s an over-the-top response, but it's also an out-of-control situation. While we millennials may have been the first to tweet about being better off without the House of Representatives, we’re certainly not the first to think such things. In similarly turbulent times — namely, the Great Depression — MGM released a film called Gabriel Over the White House responding to national unrest. In the film, fictional President Judson Hammond went ahead and did away with the legislative branch entirely. He became a dictator. The weird part is, President Hammond was portrayed as a hero who fixed all of America's problems.

The film opens with a festive inaugural ball. Members of the president’s party crack carefree jokes about leaving campaign promises unfulfilled. Meanwhile, more than a million U.S. citizens are camped in 27 public parks around the country (think Occupy). This "army of the unemployed" is poised to march on Washington. Their universal demand is that the government secure jobs for its people. Hammond is a fairly crooked politician, and his initial statement about the mass protest hits several familiar marks. He tells the press corp that the participants are "anarchists," calls their presence in public parks a "local matter," and reminds us that his "party promises a return to prosperity."

After a car accident leaves him temporarily in a coma, however, Hammond is decidedly changed. As a result of divine intervention (the angel Gabriel?), he comes back from the brink of death as a reformed man. He rejects the prevailing wisdom of his party, dismisses his cabinet, and joins the army of the unemployed to make a rousing speech about offering them relief provisions and work. When Congress balks at his grand plans, President Hammond simply declares martial law on the grounds that the rampant unemployment and starvation constitute a national emergency.

The film is oddly relevant today, and it's oddly satisfying to see Congress summarily dismissed — even in black & white. The film shows us an eerily similar reality where politicians are more loyal to the party line than to any personal convictions and the country struggles with widespread unemployment. It both demonstrates that the concerns of our generation are not unique (despite its antiquated characterizations of race and class) and shocks with its fantasy of an American dictatorship.

Most importantly, though, it conveys a difficult truth that's equally applicable to our recent shutdown: every stakeholder in even the film's most dire political machinations is possessed by a clear love of country. As a result, there is no real villain in this story. Congress argues that their disbandment violates the integrity of the democracy. President Hammond counters that democracy was violated the moment that Congress stopped responding to the needs of its struggling people. Even a notorious gangster who represents political corruption makes the argument that he is supporting freedom.

That’s what’s so troubling about both the film and our most recent iteration of adversarial partisan politics: all sides believe that the success of the nation hinges on the success of their point of view. And when those sides truly become entrenched, functional democracy may be an illusion. The movie is a fantastical resolution to that fear.

In the ideal America (at least according to Thomas Jefferson) our freedoms ensure "the safety with which error of opinion may be tolerated where reason is left free to combat it." Theoretically, as long as we’re free to battle it out in an open marketplace of ideas, the truth will prevail. The trouble is that the reasoning of smart, rational people in this country has not led us to a clear course of action. President Hammond’s (divinely-inspired) solution is benevolent dictatorship. What will our solution be?