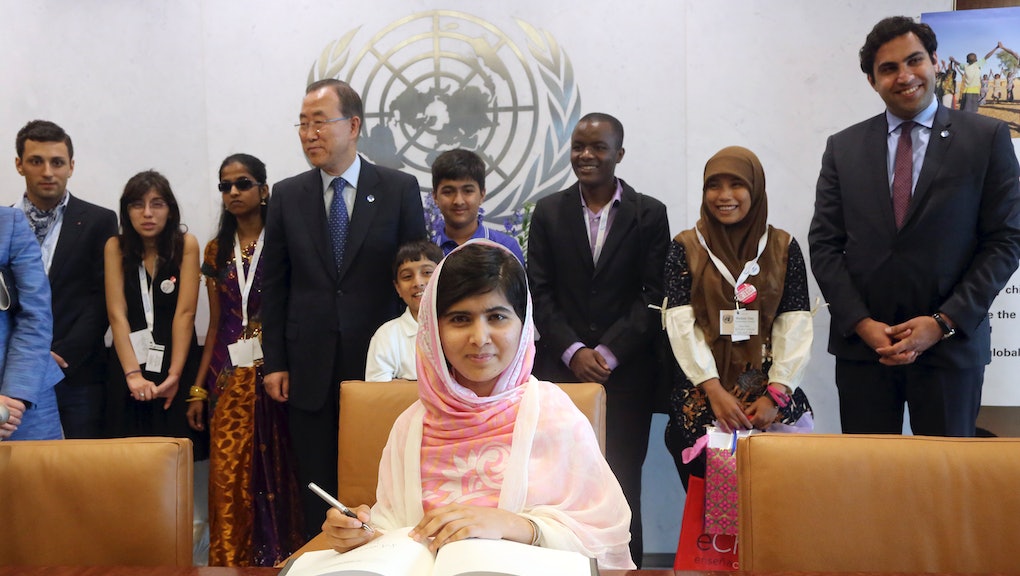 What Malala Yousafzai Wants, and Why the West Doesn't Get It

Will the end of the Taliban make Malala’s dream come true? The past week presented itself to bewas a disappointment for those hoping Malala Yousafzai would win the Nobel Peace Prize. The 16- year- old Pakistani girl, who was shot by the local Tehreek -e-Taliban Pakistan (TTP) for championing women’s education, was showered with a host of international awards in the past few weeks, in addition to all the praise she has received since the shooting.  However, in Malala’s own country of Pakistan, she has often been lamentedcondemned for her new found celebrity.

Detractors have spewed their anger towards Western governments for using Malala as a “pawn” in some overarching imperial design, while some have directly targeted Malala for criticism, accusing her of appeasing her “colonial masters,” an opportunist fueling the Western propaganda machine against the Muslim world. Regrettably, media personalities and politicians alike are seemingly portraying Malala's struggle for education as a war against the Taliban — a severe misrepresentation of what her noble intentions surely are. Her story seems to have bolstered the toxic “Us vs. Them” or “West vs. Islam” narrative, rather than reinvigorating a much needed discussion on why education remains inaccessible for most in the developing world.

The Pakistani constitution declares education to be a fundamental right for every child. Furthermore, the responsibility of educating every child is that of the state. Article 25A of the document reads, “The State shall provide free and compulsory education to all children of the age of five to sixteen years in such manner as may be determined by law.” While little doubt exists over what the government's action should be, education remains almost an afterthought in most areas of Pakistan.

Poverty undoubtedly is the most restraining factor for most households in both urban and rural areas. While most families admit that education is likely to bolster their fortunes, their dire financial situation makes it tough to sustain their child’s enrollment in an education facility. Often, many drop out, and the families prefer that their child work at a store to make some extra cash.

A lack of basic facilities is another reason why many children choose to work or stay home. In urban centers, the private sector poses a threat to public education, as private companies are able to finance bigger buildings and attract better teachers. For decades, successive rulers have seldom paid attention to any of these issues.

The current Pakistani government, led by Prime Minister Nawaz Sharif, has IMF-appeasing policies that are predicted to exacerbate poverty, and many more children are expected to quit schooling in exchange for paid labor. And while child labor is illegal in Pakistan, millions continue to work in appalling conditions, often because the state turns a blind eye to unsafe work environments in order to allow industries to multiply their profits.

An important point to understand is that none of these problems were a creation of the Taliban. The overwhelming majority of Pakistan is free of these religious fanatics. Yet quality education remains a dream achievable only by the very rich.

In fact, the Taliban are part and parcel of the same dilemma. The creation of the Afghan Taliban happened due to a dangerous blend of radical indoctrination and poverty, adapted in American- and Pakistani-funded madrassas (religious seminaries) in the 1980s. The Taliban preyed on the desperation of thousands Afghani child refugees, many of whom were orphans, to settle their score against the Soviet army in Afghanistan.

It is vital that we recognize that starvation, lack of education, and lack of working opportunities are likely to lead some 15-year-old orphans to seek refuge in a radical seminary. While we shouldn't sympathize with the fully grown, murderous, and fanatical Taliban version of this young orphan, we must do what we can to learn lessons from their lives.

Earlier this month, Malala's haters were silenced when she bravely asserted that the Pakistani government should engage with the Taliban instead of pursuing war. At the same time, it is hard to ignore how her plea is portrayed to be part of some deranged “Clash of Civilization" narrative.The Taliban is horrible, but getting rid of them will not solve the hopeless situation of the Pakistani education sector.

Quality education is a fundamental human right. But for many children of the world, it remains out of reach. Unless grassroots issues like poverty, health care, and conflict resolution are addressed, the Taliban and groups with other extremist ideologies are likely to persist.

In the end, its the Malalas of the world who will continue to suffer.