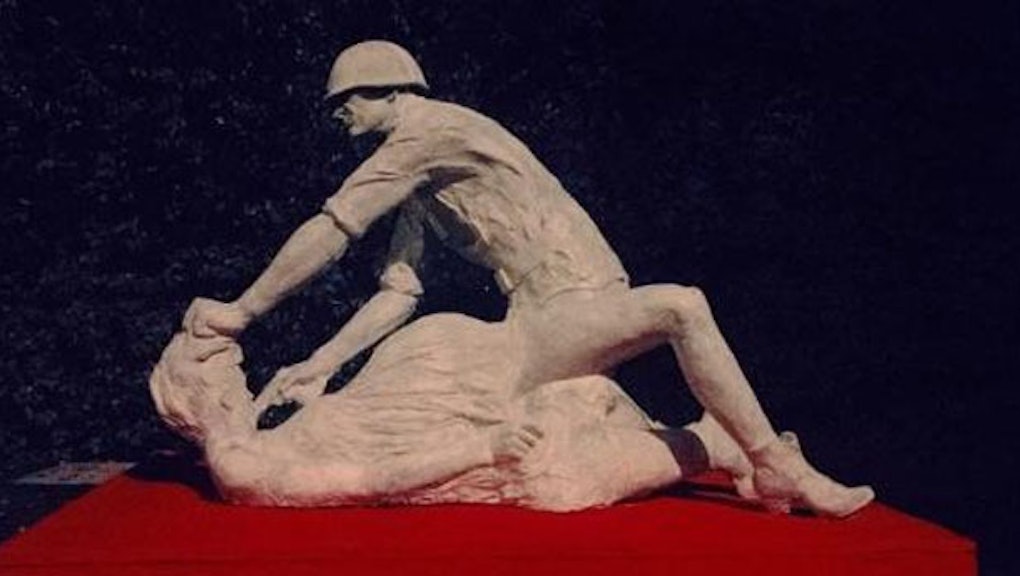 A Polish sculptor is in hot water for a sculpture he made depicting a Soviet soldier raping a pregnant woman. The sculpture had been installed in Gdansk, Poland much to the chagrin of Russian officials as well as locals, who demanded that it be taken down. The sculptor, Jerzy Bohdan Szumczyk, claims the art project is an attempt to illuminate the evils of war as well as the travails of women. However admirable the sculptor's intentions may be, his goals might never be achieved due to its explosive and controversial portrayal of rape.

At first glance, the sculpture seems to go out of its way to be labeled "controversial." The Russian ambassador to Warsaw called it "vulgar" and "openly sacrilegious." Because of its scandalous nature, it's easy to write-off the project as crass and tasteless.

However, the sculpture, is rooted in a historical memory. In its rescue from Nazi control during World War II, the Soviet army is said to have committed rape on an enormous scale. By drawing attention to this, the sculptor is dredging up dreadful memories and connecting them to war. That is commendable.

And yet, it was a woman who called local authorities to complain about the sculpture. The subject of rape is loaded, and if an artist decides to tackle it, he or she should do so with great care. Most people find rape detestable, but for women, it evokes something much greater: shame, violation, trauma, and layers of pain. However commendable the sculptor's intentions may have been, a sculpture graphically depicting a rape, installed in the middle of a city center, is sure to inspire strong feelings and emotions, none of which match the sculptor's original intent.