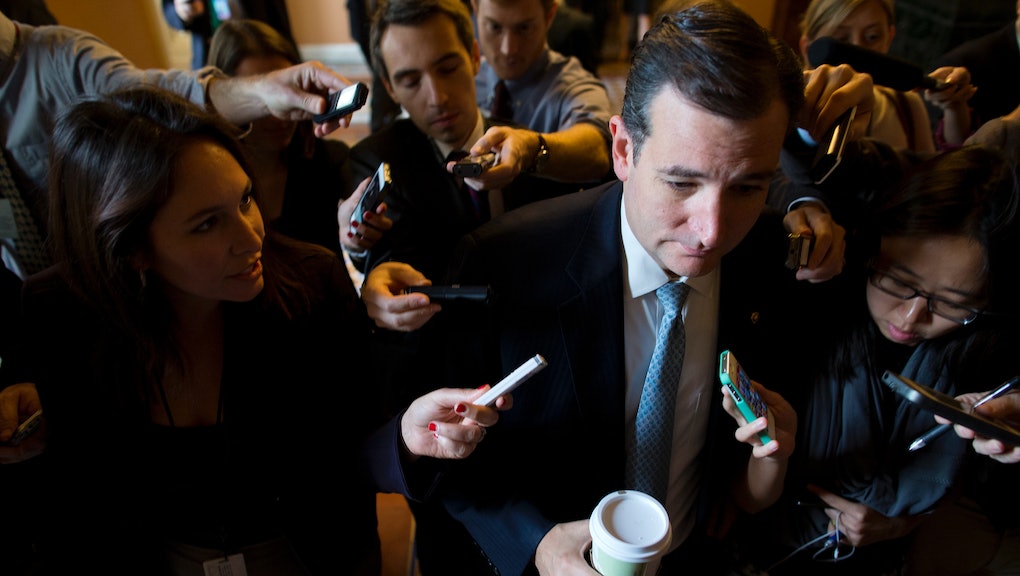 Ted Cruz's Popularity is Sinking, and Polls Show He Has Himself to Blame

The partial government shutdown is finally over: President Obama signed the bill that re-open the government Wednesday night. All of the government is back to work, we have temporarily avoided default, and Senator Ted Cruz’ (R-Texas) political career is all but done. He will certainly continue to raise money from the Tea Party — but as a viable candidate for president, a power broker in Congress, and the new face of the Republican Party, Cruz is all but cooked.

Cruz' biggest mistake was leading the Republican Party on a fool’s errand attempt to force a repeal of Obamacare. Literally up until the last hour before the vote to re-open the government, Cruz was arguing against the Affordable Care Act and trying to shame any Republican who wouldn't join him in his crazy quest. Republican power brokers won’t soon forget the man who almost sank the party.

Even worse, Cruz had no reservations about leading the crusade against Obamacare: He gleefully accepted the role of the face of the government shutdown. Starting with his 21-hour “fauxlibuster” on the Senate floor, he made it his personal and professional mission to drive the strategy to leverage a government shutdown and the prospect of default in order to repeal or defund Obamacare.

In the end,The deal that was struck to re-open the government contained practically no modifications to the Affordable Care Act. This is an epic failure for Cruz. It is the first time that a government shutdown resulted in such a one-sided victory by either party. You don’t come back from that failure. Not after your strategy resulted in the lowest approval rating for any political party since pollsters started taking the pulse of the American people. Cruz’ strategy was so poorly thought out and executed that it actually succeeded in raising the approval rating for Obama and his health care law.

Unsurprisingly, Cruz’ favorability ratings have dropped precipitously with every group other than Tea Party voters. The most recent NBC News/Wall Street Journal poll found that only 14% of Americans had a favorable opinion of Cruz. In fact, the polls showed that as Cruz' name recognition increased, his favorability ratings dropped.

Cruz's hometown paper, the Houston Chronicle, even issued a statement suggesting regret over their endorsement of his run for Senate. While the paper denies pulling its endorsement, it doesn't pull any punches against the Tea Party senator: The Chronicle says Cruz needs to be more “statesman-like” and learn to “reach across the aisle when necessary.” Either way, the stinging op-ed is a damning criticism of the junior senator from Texas.

Cruz' actions burned all bridges in the Senate. As Slate noted “it’s likely that no senator has created as many enemies in his party in as short a time as the junior senator from Texas.” Of the 18 Senators who voted with him to not open the government, only Senator Mike Lee (R-Utah) is likely to “ride or die” with him much longer. Expect Senators Rand Paul (R-Ky.) andMarco Rubio (R-Fla.) to gracefully put some distance between themselves and Cruz' flamethrower.

At this point, it wouldn’t surprise me if Cruz either didn’t run for re-election, or even left early to take a job with a conservative think thank like the Heritage Foundation. Of course he’ll take his exceptional fundraising – he raised almost $800,000 in the third quarter, much of it coming in after the shutdown – skills with him.

Either way the Cruzade is over.