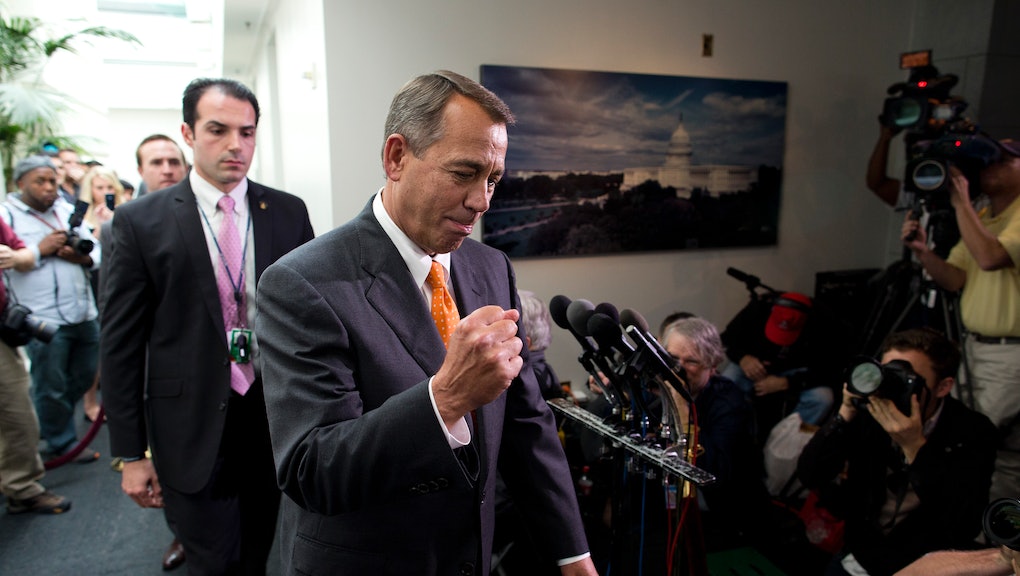 According to Standard & Poor's, the 16-day government shutdown has cost the economy $24 billion. That number includes $3.1 billion in lost government services, $3.5 billion in lost wages, $2.4 billion in vacations people didn't go on, and another $1.2 billion from closing down the National Parks. Fourth-quarter GDP growth, which economists estimated to be around 4%, was tapered down to 2.4%.

To put that number in perspective, the federal deficit for the 2012-2013 fiscal year was a little over $900 billion, and total Obamacare spending (not including its increased revenues) comes to a bit over $600 billion. These are the numbers that the GOP is likely to point to next year when defending what Nancy Pelosi is now referring to as a $24 billion "temper tantrum." Even a modest concession, such as the $60 billion medical device tax, would have made shutting down the government worthwhile for Senator Ted Cruz and the Tea Party caucus.

Democrats will have plenty of their own "context" to throw out. $24 billion would fund one-and-a-half NASAs, or pay to send a manned mission halfway to Mars. $24 billion could pay for over one million students to receive free in-state college tuition. It could also buy everyone in America a Subway sandwich 15 days in a row.

Of course, the full economic effects of the government shutdown won't be known for some time. In the next few weeks, the economy should see a modest rebound as furloughed government workers spend paychecks they were owed during the shutdown. However, to understand what the shutdown has really cost the economy, it has to be considered along with every other manufactured crisis and game of political chicken over the past few years. The economic uncertainty ranging on issues from the future of tax rates, government funding, and treasury bonds has, according to one study, increased corporate borrowing costs by 0.38% and lowered economic growth since 2009 by 0.3% annually. According to Paul Krugman, this all adds up to about $700 billion from the economy or 3% of our GDP. If it weren't for these losses, unemployment would be under 6%. In his words, "Great work all around, guys."