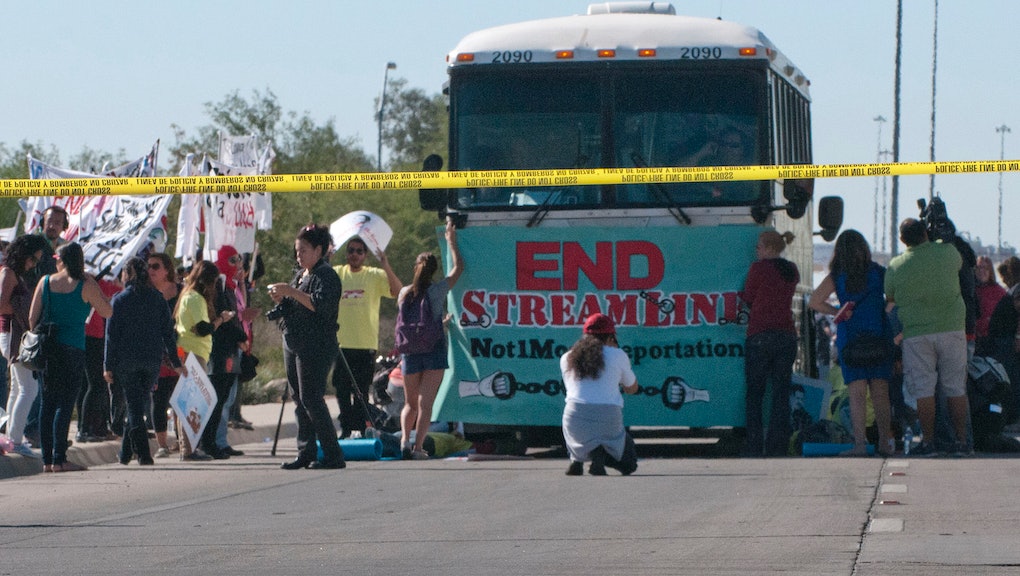 I Would Not Vote For President Obama Again

The day that President Obama was first elected I felt that our country had a president that represented my interests and my generation. On many fronts, he has proven that to be true. But the record-breaking number of deportations under his administration have broken my young voter's heart.

On Tuesday, another member of the Dream 30 was released from detention and given temporary legal status. That leaves 24 more out of the 30 originally detained, and 11 million others still living in constant fear of President Obama's deportation program.

For our first president of color, Obama’s administration sure is terrorizing people of color, particularly Latinos and other immigrant communities. By the end of this year, almost 2 million people will have been deported since he came into office, about as many people as were deported between 1892 and 1997. The political rhetoric around this policy insists that only criminals are being caught, but studies have shown that as few as 22 percent of those deported had any criminal records at all.

Many of those being forced out of the country are in fact parents of citizen children, children who are often fed into the foster care system for lack of legal guardians. Once this happens, parents are faced with immense barriers and catch-22s preventing them from fulfilling their legal duties to gain back custody of their children. Too often, they lose custody for good.

Obama’s deportation policy not only separates families, it leaves undocumented people in constant fear, or "living in the shadows," as the media likes to say. This phrase is not just a metaphor for living without documents. It literally means picking jobs, housing, and health care that keeps you under the radar. It means staying at your underpaid position as a domestic worker because it is the only place you can make a living without documents. It means going without health care because you cannot afford it. It means not calling the police when your partner is hitting you because you might be entered into Secure Communities' system and get deported. It means staying with that abusive partner for years because his citizenship is the only thing that keeps you hear legally.

Living in the shadows means no safety or security. It means surviving, not living.

As the mother of a mixed-status family once said to me, it means that "nobody can actually plan for a brighter future, because we are so focused on the day by day. I’m afraid everyday when my husband walks out of the house, and my children are very aware of the possibility that their dad might not come home one day. This feels so far away from what I grew up with, what I see for being American. I want to get back to where America stands for equality and equal opportunity."

Me too. In the past month, immigrant rights activists have shown that they will not back down on fair immigration reform, and though I would not claim success quite yet, most of them have faced only minor retribution. The Dream 30 are slowly being released, and protests in Tucson forced immigration authorities to deport detainees directly to their countries of origin, skipping jail time. But these are small small victories.

Immigration reform with a fair and reasonable pathway to citizenship for the 11 million undocumented dreamers would be a huge win. But if we do manage it, I will not be thanking President Obama. I will not give credit to the man who has deported 2 million people, shattered countless families and forced 11 million people into the shadows.

Not my president. My people.