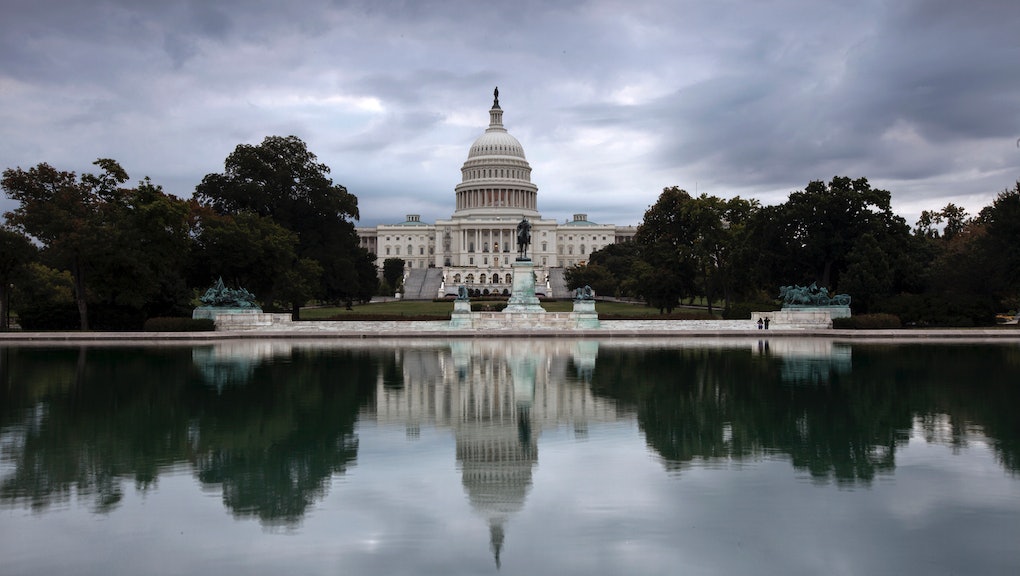 Next Debt Ceiling Deadline Will Be a Gift to America's Enemies

If you’re feeling somewhere between lukewarm and irate about the 11th-hour bipartisan deal that temporarily brought the federal government back to functioning capacity Thursday, you’re not alone. I have to say, if I were lying on the floor in the ER having a heart attack and the doctor tossed some aspirin at me on his way out the door, I’d hardly thank him for doing his job. As we’re coming to realize, there is no cure for congressional ineffectiveness, only an ever-present opportunity for all of us to adjust to this impaired state of governing and try to mitigate the growing range of national-security threats that it invites.

We don’t see the United States crumbling into dust just yet, because a permanent decline in American power and influence would be far more subtle than a single apocalyptic event. And while the U.S. is far from meeting the same fate that the Soviet Union did, it’s hard to ignore the embarrassing parallels. Gorbachev’s government overextended its resources in an unpopular war in Afghanistan, its public perception was generally poor, and Soviet politicians bickered over how to implement the fundamental tenets of their common ideology. The economy faltered, and the people behind those irresponsible policies that drove many into poverty went unscathed. While the circumstances surrounding these issues in the USSR were very different from our own today, their effects on morale and reputation were just as debilitating. What’s frustrating is that the U.S. is in a far better position to overcome such setbacks, but our lawmakers would rather stand in their own way.

Ultimately, this constant anxiety over whether or not we can count on the government to be open and working for more than a few months at a time puts us in a submissive state that threatens everything from the national economy to public health to the effectiveness of our intelligence agencies. The proven potential for politics to divide and paralyze us at the highest levels is what our rivals, no matter how organized or disparate, want to see.

Any nation, organization, group, or individual with a shred of resentment towards the U.S. has something to gain from the chaos on Capitol Hill. One beneficiary might be China, whose government already enjoys twisting the knife about America’s heavy borrowing rates and questions the Treasury’s ability to repay. Perhaps it will be a rogue terrorist group, emboldened by our political and economic disarray, not to mention by the fact that our examination of the intelligence failures in Boston is once again on the back burner. Or maybe it will be Russia, whose tenuous influence over regimes in Eastern Europe and Central Asia might gain the tiniest bit of credibility at the expense of regional democracy advocates aligned with the U.S.

As long as the U.S. imposes its "exceptionalism" abroad but tolerates dysfunction bordering on dereliction of duty at home, our country is quite simply not secure. If Ted Cruz and his crusading allies really cared about the future of the American people, they might read the news and find just a few things more nefarious than the Affordable Care Act. Let’s face it: While our TV pundits got us to swallow every tired bit of analysis of shutdown politics, we callously overlooked some major developments outside our borders. Worsening sectarian violence in Iraq, for example? A damning UN report about the impact of U.S. drone operations? A French troop surge in the war-torn Central African Republic? The world and its problems continue to exist and even deteriorate, but our representatives still haven’t wasted enough months going to war over each others’ federal spending ideologies.

But if you loved Cruz’s latest display of public servitude that took the form of a 21-hour rant, you’re in luck – he’s more than willing to do us that favor again. In fact, he says he “would do anything” to cripple the health care law. Yes, even if it means another shutdown, more headaches, and more danger for the nation as a whole. Sure, Buzzfeed and The Daily Show treat us to some irresistible commentary when these moments come our way. But the depressing reality is that  our supposedly patriotic elected officials have become the enemies from within. Through their extremist and literally destabilizing maneuvers, they incite and enable the more traditional enemies who feed off the U.S.’s failures.

As Benjamin Wittes wisely commented this week, “National security is not just things that go boom…It is possible for a country to commit suicide.” The United States alone is responsible for its conduct, and consequently, for its reputation. Congress can keep procrastinating on its basic duties, but don’t think that the world doesn’t notice these warped priorities and plan accordingly.