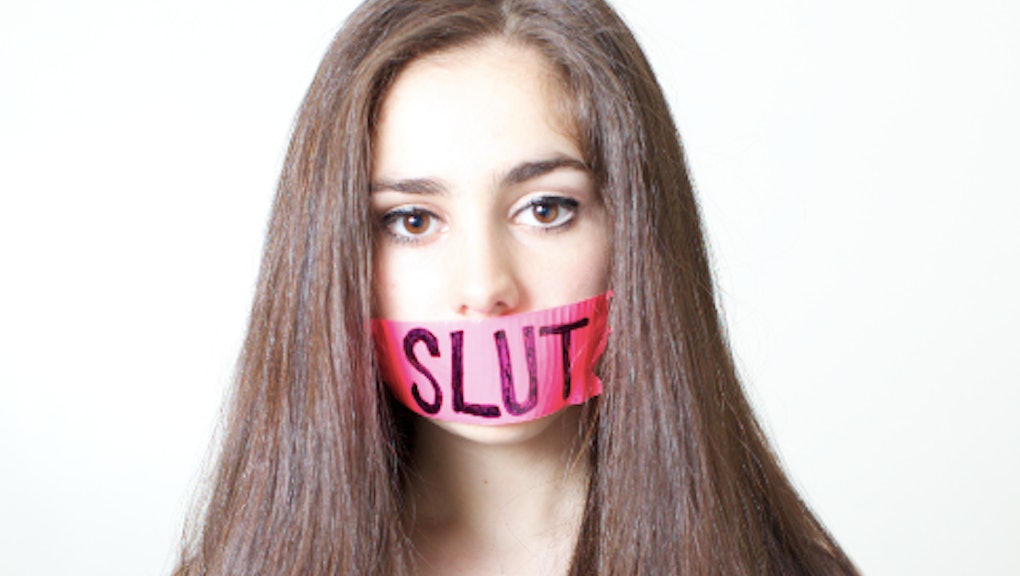 Why I Stopped Saying 'Slut'

I’m embarrassed to admit that I’ve said some variation of all of these phrases. In college, after overhearing a group of girls I knew discuss how much of a slut one of their friends was, I made an active choice to stop using the word. I just didn’t want be perceived to be as immature and disrespectful.

The word itself was easy to let go of, I rarely used it with any sense of actual meaning. I never called someone a slut because I thought that they were a slut, it was just a word I threw around to belittle girls that I didn’t like, that were "mean" to me or my friends, hooked up with boys I liked, or had called me a slut.

I’m ashamed to admit however that I’m a feminist adult woman and sometimes I worry that I’m a slut.

While I’ve definitely had the word thrown my way a few times in my life I was never (to my knowledge) actively labeled a "slut" or bullied for being one. But I do know what it’s like to be made to feel like one. I've been judged for the way I dressed, how much I drank, my number of sexual partners, and even by my ethnicity. I've been considered an easy sexual conquest, one that was less deserving of respect, or of a relationship that ever extended beyond sex. The slut-shaming that I was exposed to is so internalized that it’s still a small but very real part of how I evaluate myself, my sexual encounters, and my relationships today.

How f-ed up is that?

Maybe more disturbing: in an age where teenage girls, many of whom are rape victims no less, are so violently slut-shamed that they’ve been shunned by their friends and communities, cyber-bullied to no end, and in some cases driven to suicide, I feel like one of the lucky ones.

How has such a meaningless word has become such an incredibly powerful tool to dehumanize women?

Inspired by the real-life experiences of 14-17 year old girls, Katie Cappiello and Meg McInerney, founders of The Arts Effect All-Girl Theater Company, began crafting SLUT: the Play in January of 2012. Through weekly story sharing and brainstorming sessions with their NYC all-girl ensemble, they came up with a powerful story that "daringly addresses the intense impact of ‘slut’ culture, gang mentality, and the over-sexualization of girls and women on communities."

Their mission to end slut-shaming didn’t stop there. It has evolved into an entire Slut Stop Movement. I recently  had the pleasure of speaking with Jennifer Baumgardner, one of the brains behind the movement.

Baumgardner had an idea. After being invited to speak on a panel at a staged reading of SLUT: The Play the same night that she screened her documentary, It Was Rape. "Being part of both events back-to-back inspired me to want to do something larger about some of the relationships between two common experiences: sexual assault and sexual scapegoating," she said.

With the new spat of slut-shaming and rape-apologist attitudes coming out of the recent Maryville Rape case, aka Steubenville 2.0, there is clearly a need to connect these dots.

Baumgardner sheds some light on the silence. "To some degree, I think we, as a culture, don’t believe that sluts can be raped — and if someone was raped, she was probably a slut. It’s this circular logic where women are always at fault — punished and blamed for having bodies, desiring attention, or simply existing. There is so much denial around rape — denial that it could happen to us, denial that our friends or brothers or fathers could be rapists; and 'slutting' is our coping mechanism when faced with how upsetting the normalcy of rape is."

While I definitely agree with this assessment, apart from a convenient way to avoid addressing sexual assault, I feel that "slut" is also used to systematically regulate and control female sexuality.

And that might get to the heartbreaking center of the issue — the way slut-shaming robs women of their humanity. "'Slut' is used so frequently and unconsciously anytime a woman is sexual," Baumgardner said. "Every one of us has a human right to our sexuality, it's a core and beautiful part of who we are as human beings."

In addition to SLUT: the Play, the movement will be hosting a Stop Slut Conference in Manhattan, beginning tonight.