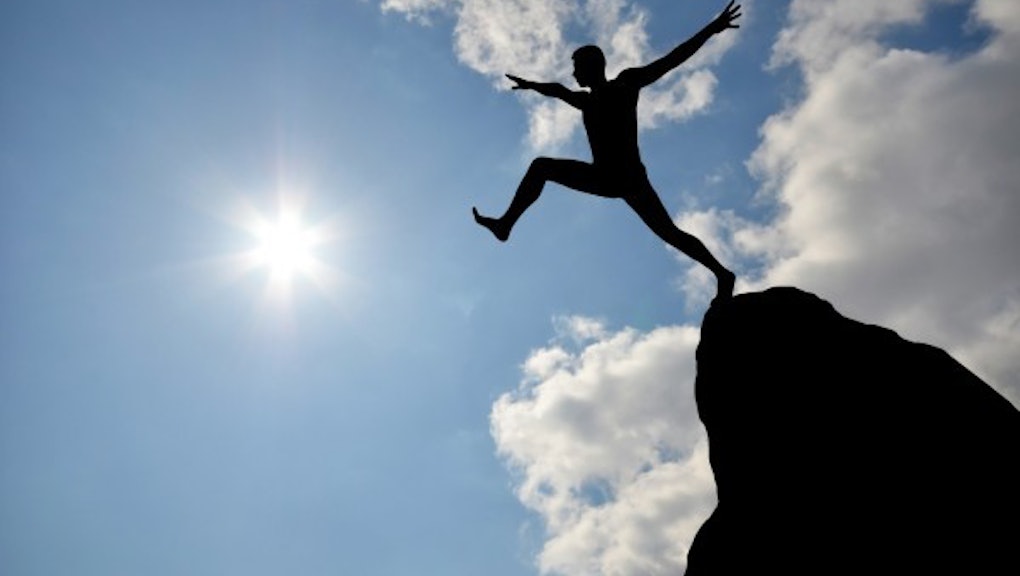 America the Beautiful — Also, Land of the Crisis and Home of the Hypochondriacs

We, the tweakers of the United States, in order to form a more bugged-out union, should continue about exactly as we are — trapped in a self-perpetuating nightmare in which we can only increasingly approach our impending doom but never actually meet it. We face the cliff from which we'll fall to our tragic and premature deaths (we are, after all, mere babies at only 237 years old.) It's like the tenth circle of Dante's Inferno, except it's real, it was created by the tweakers and for the tweakers, and you're living in it for all of eternity.

Nah, you're fine. That's just a little bit of political talk. The truth is, America is a nation of alarmists constantly panicking over crises that never materialize. It's as if we're all infected with a freak-out gene. We've seen it play out over and over again in our short history and very few of those times were legitimate causes for mass concern over our nation's survival.

The imminent crisis rhetoric is an age-old tactic not specific to any one party or time period. Fareed Zakaria recently said that modern conservatives are on a "diet of despair" and are addicted to the "dark narrative" that's been spun for decades now. Ted Cruz, somewhere in his rant, said that we Americans are "nearing the edge of a cliff" and very close to falling off of it into "oblivion." That's right, oblivion. Apocalyptic nothingness. Last year, Biden said, "We now find ourselves at the hinge of history," and declared that the U.S. "literally stood on the brink" of potential disaster. (Do the majority of Americans have a serious fear of falling from a high point or something?)

Rationality, context, and a little less drama are desperately needed. To borrow from John Giokaris on the recent government shutdown, "For God’s sake, this has happened 17 other times in the last 40 years ... We managed to survive and we’ll survive this one too."

What a breath of fresh perspective. Here's some more.

Rewind to 1776. Philosopher and writer Thomas Paine began publishing a series of pamphlets, quite appropriately titled, "The American Crisis." He famously wrote, "These are the times that try men's souls," to urge the American people to fight the British. Our independence depended upon it and we fought an eight-year-long war for that pivotal victory.

So maybe we were destined to be a hypochondriatic democracy from the start; we were founded upon and birthed into crisis mode, in constant belief that our politics and policies are more dire than ever before.

In 1922, American journalist H.L. Mencken wrote about the Harding vs. Cox run for the presidency. "Would it be possible to imagine anything more uproariously idiotic — a deafening, nerve-wracking battle to the death between Tweedledum and Tweedledee? ... The plane of undiluted comedy is peculiarly American, that nowhere else on this disreputable ball has the art of the sham-battle been developed to such fineness." (Well, some things certainly never change.)

But why was he so surprised? If he truly believed that the U.S. was — at that time, more than any other time — in "cultural decay," to use Zakaria's words, he'd clearly failed to reflect back a couple of years, to ... hmm, let's see ... slavery, which, yes — with all due respect to Mencken — I would call more "uproariously idiotic" than a moronic presidential campaign.

He shouldn't have been so shocked by the corrupt and juvenile politics, either. A year ago, Newsweek ran a cover that read, "How Lincoln traded favors, twisted arms, and bullied friends to win the good fight."

Mencken had a bad memory. And he was in for a few more disappointments.

God forbid, the radio was invented — how terrible, another medium for free speech. (In 1931, he wrote that radio was "monopolized by obscure ignoramuses with nothing what ever to say.") But no one listening to Edward Murrow’s legendary CBS report of Buchenwald during WWII would call Murrow an "obscure ignoramuse." In fact, Murrow was detailing a very real and extremely horrifying description of what he witnessed at the concentration camp, and thousands of Americans back home were listening to the broadcast.

That report was in 1945. The U.S. was coming out of the Great Depression. Unemployment had been over 20% for more than 10 years. The Nazis occupied Europe; the Japanese had Asia.

Now, that is a bleak picture. That is "cause for alarm."

Since then, as Zakaria writes, the U.S. "has grown mightily, destroyed the Soviet Union, spread capitalism across the globe and lifted its citizens to astonishingly high standards of living and income." He adds that we've "funded science and space research, and — along the way — ushered in the rise of the most productive and powerful private sector the world has ever known."

Today's problems ain't no thang compared to "almost any period in U.S. history," he writes. "Even after the worst recession since the Great Depression, there are no obvious radicals, anarchists, Black Panthers or other revolutionary movements — save the tea party." The U.S. ranks third on the UN's human development index out of about 200 countries.

Back to 1776. Paine was right, it was a time that tried men's (and women's) souls. But men’s souls were tried many times before that and will be tried many more times to come. Politicians apparently haven't changed much for a couple hundred of years, and journalists are simply "an old team learning a new trade," as Murrow said when TV was first invented (another shock we miraculously endured.)

The world can’t be ending today, because everyone thought it was going to end yesterday, and they were wrong. We might still have a long way to go, but that doesn't mean we haven't come pretty damn far already. So, everyone, chill out.