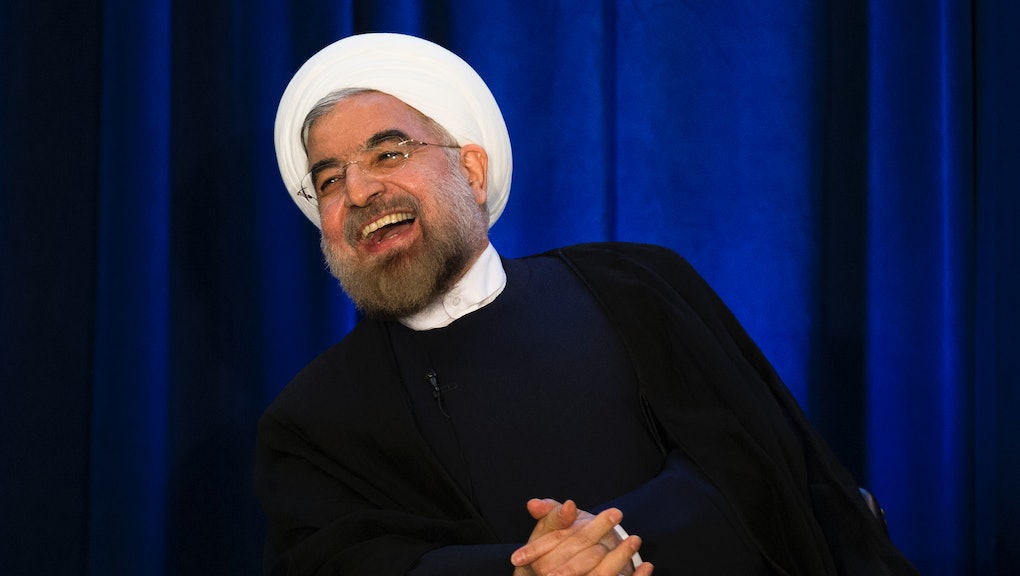 World powers are making moves that could finally bring about the end of the crisis in Syria: After months of delays, the long-awaited Geneva 2 peace conference is expected to take place before the end of the year. Better still, the State Department recently suggested the United States might welcome Iran at the bargaining table. And judging by the positive reaction of all parties to this week's negotiations on Iran;s nuclear program, the offer might actually be serious. If it is, we could see an end to the Syrian civil war before long.

The UN-backed Geneva conference is an attempt by the United States and Russia to bring stakeholders to the table in order to reach a consensus on how to settle the civil war in Syria. The participants are looking to implement the Geneva Communiqué that was issued at the Geneva 1 conference in June 2012. The communiqué establishes a framework for diplomatic resolution of the crisis and seeks to create a transitional government formed on the basis of mutual consent of the government and the opposition in Syria.

Iran, however, was not invited to take part in the first Geneva conference; hence, it's not a signatory to the communiqué. But with the recent thaw in U.S.-Iran relations, the latter has a chance of making it to Geneva this time, if it signs the final statement from the first round of talks.

Iran is no stranger to Syria; it has had vested interests in the country for decades. Syria has been a long-standing ally of Iran and part of what many call the "Shia Axis." Syria remains a crucial element of Iran's foreign policy, ensuring the country's interests in the Middle East. Syria is key to Iran's fight against Israel by providing a bridge to Hezbollah and Hamas, anti-Israeli militants groups to whom Iran funnels arms.

Iran doesn't have immediate economic interests in Syria, but at the same time, having invested $14 billion in the country during the civil war, Iran would like to get something back. It could also create a military base in Syria as part of a new stronghold in the region. All this means Iran will fight to keep the Assad regime in power, unless it receives assurances that whoever takes Assad's place will preserve Iran's interests in the region.

In Geneva, Iran could certainly one of the pro-government parties and might back Russia's attempts to keep Bashar al-Assad in power. However, there's also a chance Iran could push for Assad's removal, as long as a member of a the Alawaite sect takes his place; that way, Iran's interests in the regions would be preserved. After all, Iran's president and foreign minister explicitly stated that the Syrian regime had made grave mistakes, and that they would support any ruler elected by the Syrian people. Besides, Iran suffered from the use of chemical weapons by the Iraqi regime back in the '80s, so Iran won't look favorably on Assad's use of chemical weapons.

Another point of agreement between Iran, the United States, and Russia is that none of these countries want militants associated with Al-Qaeda come to power in Syria. By working together on a diplomatic solution to Syria's civil war, these powers can ensure that rebel groups with terrorist ties don't come to power.

This means that as a result of the talks, Iran may agree to early elections and Assad's deposition, as long as members of his sect remain in power.

As long as Iran is not invited to the formal talks on Syria, it keeps contributing to the destabilization of the situation in the country by transferring billions of dollars worth of aid to the Assad regime. Iran has people on the ground and influence with the current president of Syria. So, if the international community wants the crisis in Syria to be over, they need to talk to Iran, the country that is part of the problem. While the relations between the West and Iran are undergoing a positive change, the world must seize this chance to engage everyone in this dialogue.