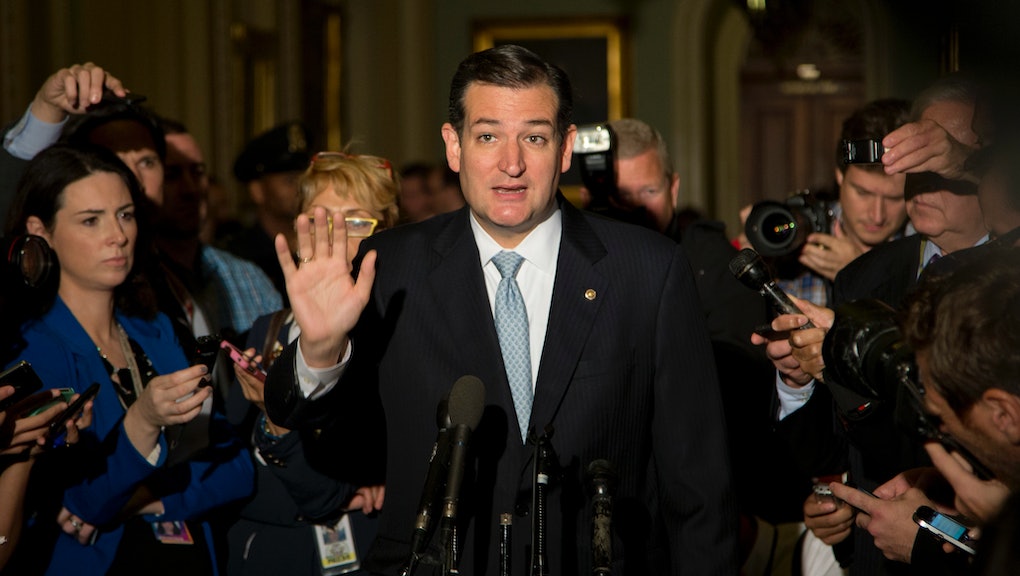 On his radio program, Rush Limbaugh asked listeners to imagine if the Senate consisted of 45 Ted Cruz's. After nearly choking on my breakfast upon hearing this, I attempted to consider what the Senate would look if there were 44 more filibustering Lone Star State mavericks.

That thought experiment sent chills down my spine. One Ted Cruz is enough. While the Tea Party may have yielded low returns in the recent compromise, the political spectrum has shifted to the right. And that is quite an impressive victory. According to Limbaugh, because Ted Cruz is a one man budget killing machine, 45 Cruz's would could get quite a bit accomplished.

The Tea Party did not get any major policy concession as part of the compromise, but as commentator David Sirota points out, the political discourse shifted further to the right, and a clean continuing resolution bill included funding levels lower than Paul Ryan's original budget. By yanking the discourse rightward, the perceived moderate position was an incredibly weak budget resolution.

But just for fun, lets speculate the implications of a 45-Ted-Cruz Senate. The Senate, a dysfunctional deliberative body in its current state, would filibuster every bill that Harry Reid brought to the table. So-called compromise bills would not make their way to the president without innocent riders like trans-vaginal ultrasounds, major cuts to important federal programs, national right-to-work, and even more "freedom" for fossil fuel companies to plunder the earth. Abolishing a national minimum wage would be a bargaining chip in budget negotiations, and voter disenfranchisement would become a legitimate policy demand.

But as fun as all that may be, one Ted Cruz is enough.