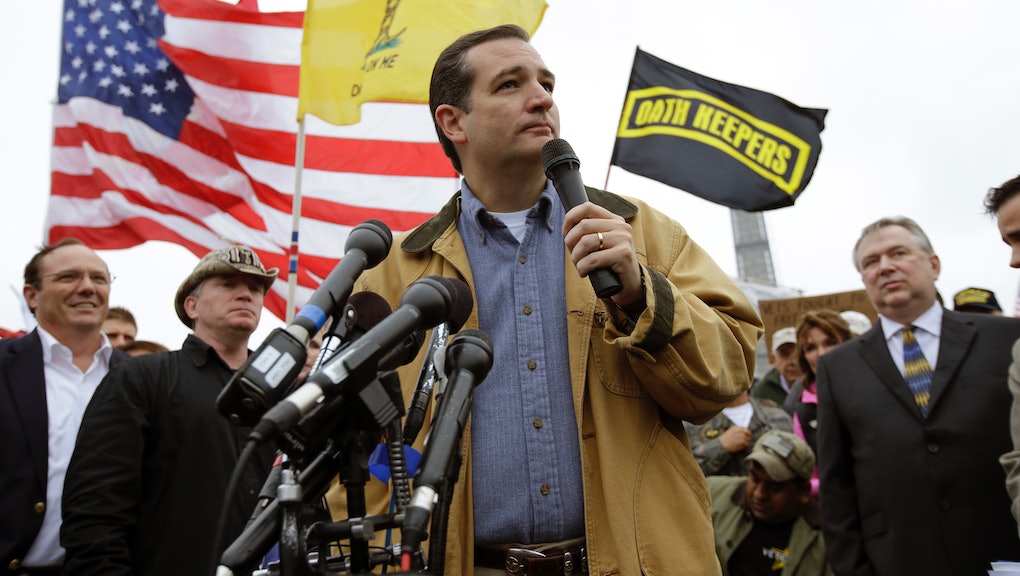 Tea Party Movement is All About Innovation, and Will Play a Big Role in Election 2016

In the aftermath of the fight over Obamacare, the government shutdown (well, the 17% government shutdown), and the latest debt-ceiling dance, prognostications for what's going to happen next are plentiful. Although Congress has a single-digit approval rating as a whole, Republicans are viewed less favorably than Democrats.

Sure, President Obama's approval rating is in the low 40s. But Republican congressional numbers are lower than everyone else's right now. So what happens next? As the dust settles, will the events of the last month affect the 2014 midterm elections or the 2016 election?

The Grand Oracle of Statistics himself, Nate Silver, is wary of reading too much into the current polls and predicting any huge effects that the events of the past month might have on the next election cycles. He shrewdly observes that the media is probably overstating the magnitude of the shutdown's political impact, that Democrats face extremely unfavorable odds of recapturing the House, that the polling data on the shutdown is currently not very useful, and that the unique tensions in the current GOP make it difficult to predict future outcomes based upon history. Not to mention that congressional approval ratings as an institution are always low, while over 90% of incumbents always win.

So what is next for the GOP and the Tea Party? Asking the question in that way misses the entire point. There is a popular and compelling narrative in the ever-faster-spinning news cycle and blogosphere that this debacle spells the beginning of the end for the "Tea Party" and that the GOP establishment is going to strike back.

And there are some signs of shifts occurring, especially among big-business GOP donors. The Wall Street Journal and Politico both published pieces last week discussing how business interests are considering moving forward, with the possibility of funding candidates who are more pragmatic and friendly to business interests, implying the possibility of a clash between politicians who are considered "Tea Party"-friendly and those who are more "GOP establishment" or moderate.

But this narrative is naively incomplete at best and purposefully and manipulatively oversimplified at worst. Whether it is the IRS scandal or President Obama's unwillingness to negotiate, the Democratic Party's self-interests require it to cast the Tea Party as a homogeneous and radical group. But the Tea Party, whether it is supported by high numbers of Americans or lower numbers of Americans like the post-government-shutdown polls show, is far from the homogeneous mass that President Obama, the Democrats, and media want you to believe.

If all Tea Party groups agree on everything (they do not) and all so-called Tea Party Republicans in Congress agree on everything (they do not), then this narrative makes sense. But unsurprisingly for those who are willing to embrace nuanced, critical thinking, this narrative is incomplete. For example, Yale Law Professor Dan Kahan realized the danger of this narrative when his research revealed "that those who identified as part of the Tea Party movement were actually better versed in science than those who didn’t." As reported in Politico, Kahan wrote on his blog,  “I’ve got to confess, though, I found this result surprising. As I pushed the button to run the analysis on my computer, I fully expected I’d be shown a modest negative correlation between identifying with the Tea Party and science comprehension. But then again, I don’t know a single person who identifies with the Tea Party. All my impressions come from watching cable TV — and I don’t watch Fox News very often — and reading the ‘paper’ (New York Times daily, plus a variety of politics-focused internet sites like Huffington Post and Politico). I’m a little embarrassed, but mainly, I’m just glad that I no longer hold this particular mistaken view.”

Furthermore, as the GOP continues to wrestle over the future of the party after President Obama's reelection in 2012, so-called Tea Partiers in Congress are some of the ones proposing the most innovative policy solutions and reaching out to broaden the base.

Ross Douthat pointed this out in his New York Times column, praising Rand Paul, David Vitter, and Mike Lee for "learning real lessons from the 2012 defeat, breaking with the right’s stale policy consensus, and embracing new ideas on a range of issues, from foreign policy to middle-class taxes, the Drug War to banking reform."

This part of the narrative makes sense, though. As Democrats claim that history and changing American demographics are on their side, the Tea Party's libertarian strands naturally appeal to educated, younger libertarians disenchanted by the status quo from both parties.

David French at National Review Online has written about the need to have conviction-fueled elected representatives backing up their stump speeches with actions they promised to the voters who sent them to Washington. He has also made the point that the plan to do whatever it takes to delay and stop Obamacare looks better than ever, as news breaks that 460,000 Americans in Florida and California have been given insurance cancellations and directed to online exchanges that simply are not functioning.

Finally, Jason Grumet, the president of the Bipartisan Policy Center, argues that all of this shows that the Tea Party is making our democracy better. Writing in U.S. News and World Report, he points out, "Conventional wisdom has it that the Republicans were the political losers of this latest fiscal crisis. As a late-breaking NBC/Wall Street Journal poll revealed, the public's scorn was directed most pointedly at conservatives. More specifically, many Americans believe that it was the Tea Party's unyielding demands that drove Washington into paralysis. [...]  The uncomfortable truth for those frustrated with Washington is that the Tea Party legislators were sent to Washington to shake things up [...] Our democracy has suffered, surmounted, and been strengthened by rebellious political movements innumerable times over the past 200-plus years. Just when it seemed that ideological intransigence would do us in, a more judicious force swept in to save the day. In the process, insurgency became the catalyst for necessary change. When Congress does finally confront our spiraling debt, the Tea Party will have played an important role. And that's the point: At the core of our democracy has long been the ability to evolve and metabolize dysfunctional moments."

America does not have the longest-lasting constitution in human history for no reason. The structure works. It is messy and imperfect, but the diverse millions of Americans disagree on important issues and elect men and women to represent them in D.C. These 536 Americans debate, argue, and compromise to try to solve our nation's problems. While it's compelling for the media and our two parties to cast large groups of these representatives as homogeneous in order to vilify, blame, and attempt to defeat them in the next election, those narratives cast by both sides about the other side miss the nuanced truth.

And the future for the Tea Party and the GOP is more complex and uncertain in the wake of the government shutdown than President Obama and the Democrats would have you believe.