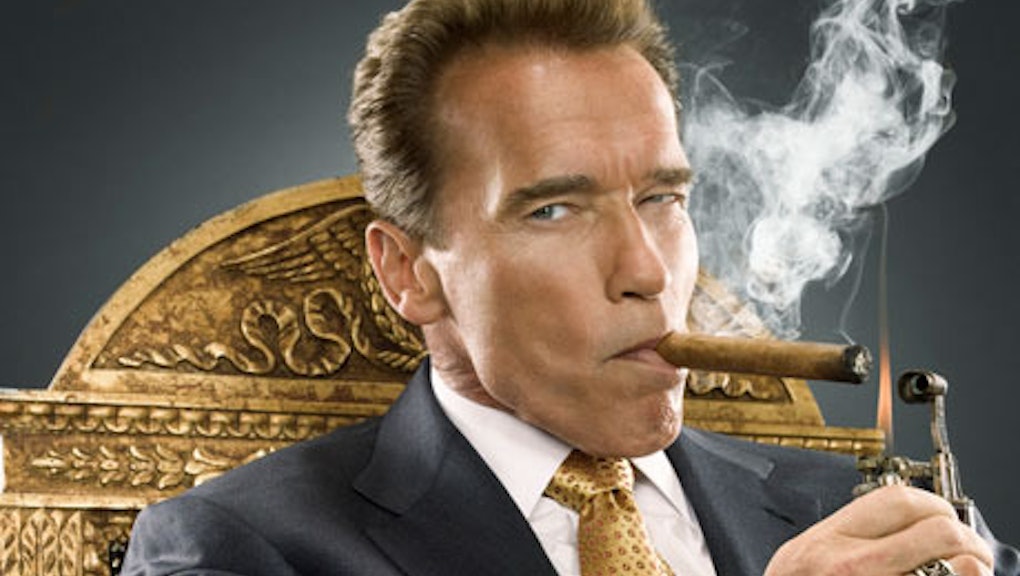 Arnold Schwarzenegger has been touring the country to promote his new movie with Sylvester Stallone, Escape Plan, but he may have even bigger plans for the future.

According to Page Six, the Austrian-born California governor has been working to see the constitutional rule that restricts foreign-born citizens from running for president changed, and is ready to file paperwork that would challenge the law. Doing so would pave the way for the former bodybuilder, action star, and moderate Republican governor to run for president in 2016.

To be clear, these sources are anonymous and nothing has been confirmed. What is worth noting, however, is Arnold's unique status as an immigrant within the GOP.

Schwarzenegger is the only Republican to have won a major political posting in the state of California since 1994. Democrats have continuously held both Senate seats and the governorship — with the exception of Governor Schwarzenegger — for almost two decades. One major reason for this is Prop 187, a 1994 California ballot measure that barred illegal aliens from receiving public social services, public healthcare, and attending public schools; forced all state employees, including teachers, to report anyone they suspected of being in California illegally; and made handling false citizenship documents a felony.

Prop 187, also known as the SOS (Save Our State) initiative, alienated immigrant populations, independent voters, and moderate Democrats. This drove many Californians firmly to the Democratic Party. The now-infamous measure is one of the reasons — albeit not the only one — that California is a deep blue state on the political spectrum, and gives Democratic candidates for president its 55 electoral votes without fail. The governor at the time, Pete Wilson, as well as the whole California Republican Party, struck a crippling blow to the state's future conservative strength by underestimating the extent to which immigrant populations would make an impact on California's future electorate.

The only way that California Republicans have been able to overcome this image of xenophobia since 1994 was by running Schwarzenegger, an immigrant, for governor. This effectively negated what had since 1994 been a hot-button issue in California, specifically the question of where the GOP stood on immigration.

By being a prominent immigrant himself, Governor Schwarzenegger was able to overcome the challenges Republicans face when they run in moderate districts, districts that lean democrat, or ones heavy with immigrant populations. He briefly turned the California GOP's fortunes around, and after a series of early political defeats adopted a moderate agenda for the rest of his term in Sacramento.

Candidate Schwarzenegger could be what the GOP needs in 2016, especially if they are going to dodge comprehensive immigration reform again. After backlash to the recent announcement by President Obama and Senate Majority Leader Harry Reid (D-Nev.) that Congress will again take up comprehensive immigration reform, this seems like an increasingly likely political course of inaction for Republicans.

After the Tea Party failure of Ted Cruz and co., the GOP could be in for a backlash that forces them to run candidates that appeal to moderate voters and minority populations in 2016. If the anonymous sources are correct, Arnold could run for president, assuming the courts don't enforce the constitutional law that bars him from running. California, as is it has been throughout its storied history, could again be a model for solving an important political conundrum.

I can see a shift in the "birther" movement now.