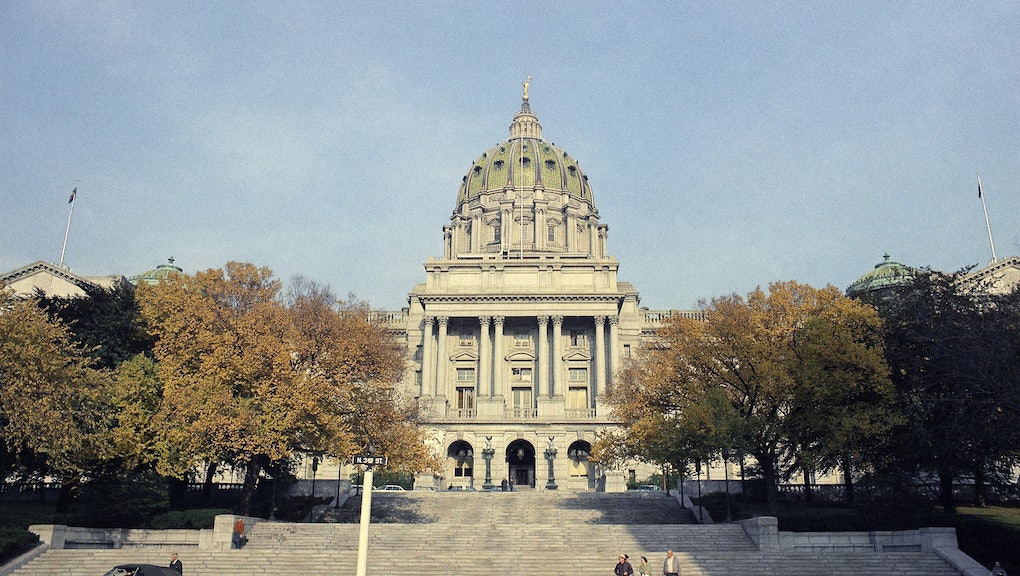 Inside the Newest Front Lines Of the Gay Marriage Revolution

You may not have realized it, but October has been a portentous month in the fight for gay marriage rights. Let's go through the list:

-Most pressingly, the Supreme Court of New Jersey rejected Governor Chris Christie's effort to block same-sex marriages, thereby affirming a ruling by a state Superior Court judge last month that declared a civil-union law to be an unconstitutional infringement of the rights of the state's gay couples.

-In Pennsylvania, Governor Tom Corbett and Secretary of Health Michael Wolf filed a motion to dismiss the case against them in Whitewood v. Corbett, which holds that their state's refusal to recognize same-sex marriages violates the constitutional rights of LGBT residents. The couples who filed the suit are preparing opposition briefs to the commonwealth's motion, while the governor did not help matters with bigoted comments that compared gay marriage to incest.

-In Michigan, a federal district court judge set a February 2014 trial date in DeBoer v. Snyder, which challenges that state's bans on same-sex marriage and adoption. As in Pennsylvania, the plaintiffs in the Michigan case argue that the prohibitions infringe on residents' constitutional rights.

-In Nevada, a civil union law is being challenged by couples either denied marriage licenses while residing in the state or who had marriage licenses voided when they moved there from states that allowed same-sex marriages (such as California and Colorado). After losing in a district court, the plaintiffs have moved to the Ninth Circuit Court of Appeals.

-In New Mexico, the state Supreme Court has agreed to hear arguments on same-sex marriage. As New Mexico is the only state in the country that does not have laws either allowing or prohibiting LGBT unions, it is in a unique position on this issue. While Gary King, the state's attorney general, has stated that he believes New Mexican statutes only permit opposite-sex marriage, he has made it clear that he believes those laws to be unconstitutionally discriminatory, and as such refuses to defend them in court. Now that various county clerks have started issuing marriage licenses to same-sex couples, the courts will need to determine their validity.

This is just the short list, by the way. All told, there are presently 35 lawsuits in 19 states addressing same-sex marriage bans.

Each of these cases entails a thicket of complex issues, ranging from the precise definition of "marriage" and its status as a constitutional right to the nuances of property law and the delicate balance between federal and state juridical powers. Although the feat of wading through the morass of legal minutiae cannot be adequately achieved in a single op-ed, one point is clear: This is a matter for the United States Supreme Court.

Earlier this year, when the Supreme Court bench issued its ruling in United States v. Windsor and Hollingsworth v. Perry (which voided Section 3 of the Defense of Marriage Act and upheld a federal court's actions to overturn California's Proposition 8, respectively), supporters of LGBT rights correctly hailed those decisions as significant steps forward in their cause. At the same time, the court pointedly neglected to address one of the key points pertaining to this issue — namely, whether the right to define marriage is limited to the states or can fall under the domain of the federal government. Indeed, the court's majority decisions didn't even mention Baker v. Nelson, the 1972 case which dismissed an appeal in a Minnesota same-sex marriage ban "for want of a substantial federal question." Without further clarification on the matter, this precedent remains the default position of the federal legal system.

That needs to change. Even if one opposes gay marriage, it stands to reason that a decisive federal ruling on the matter is preferable to the existing legal chaos surrounding this issue. On a deeper level, however, it is unconscionable for LGBT Americans to continue to suffer from second-class citizenship. If one concedes the premise that the state should have the authority to designate couplings between consenting adults as marriages (a point on which some well-intentioned libertarians differ from the mainstream position), then denying that title to same-sex partners is deeming their relationship inferior to those of their heterosexual counterparts, regardless of whether this is the explicit intention. The same is true for policies that refuse gay couples the privileges that opposite-sex spouses can take for granted, from hospital visitation and adoption rights to the ability to file joint tax benefits.

It is painful to be reminded of how, as a recent Upworthy article pointed out, 29 states still permit businesses to fire employees simply for being homosexual (when the so-called offense is being transgender, that number rises to 34). As a society, a great deal of progress remains to be made on this issue. If conservatives need to be reminded of where their values should lie on this issue, they need look no further than the man whose presidential candidacy nearly half a century ago gave rise to the New Right, Barry Goldwater:

"The big thing is to make this country, along with every other country in the world with a few exceptions, quit discriminating against people just because they're gay. You don't have to agree with it, but they have a constitutional right to be gay. And that's what brings me into it."