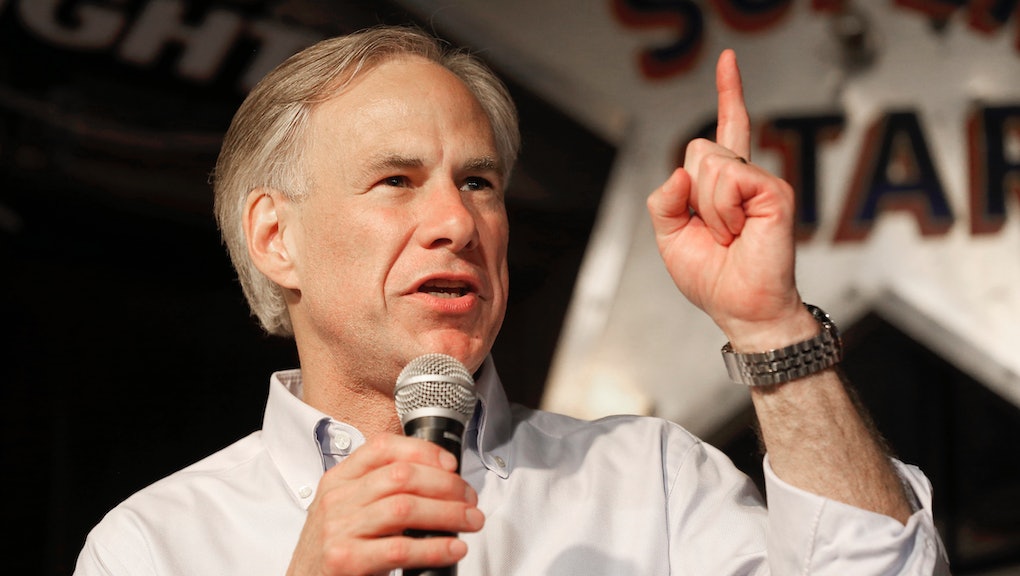 Wendy Davis has a shot at painting the governor's mansion blue next November, and Texans should take her up on her offer. Not only have the state's demographics changed but policies and politicians in the state have shifted in tandem to an unhealthy, unsustainable extreme.

What Texas needs now is directional change. Greg Abbott is only more of the same. Here's why:

At a recent campaign event in El Paso, Greg Abbott told supporters that "there is nobody in the state of Texas who has done more to fight to help women than I have in the past decade."

That's an interesting claim from someone who has compared Planned Parenthood to a terrorist organization.

He made the case in 2012 while trying to cut out funding for Planned Parenthood as part of the state's Women's Health Program. Referencing the federal material-support statue, which makes it illegal to give money to a terrorist organization even if the funds are allocated for non-terrorist activities, he implied that Medicaid money given to Planned Parenthood for cancer screenings and birth control was on par with funding, I don't know, an Al-Qaeda production of Pirates of Penzance?

This despite the fact that none of the eight Planned Parenthood locations that participate in the Women's Health Program offer abortion services. Discriminating against providers goes against federal Medicaid regulations, yet Abbott was willing to forfeit all Medicaid funding for family planning in order to spite one organization.

Tanene Allison, communications director for the Texas Democratic Party, recently labeled Abbott as "public enemy number one for women in Texas." Allison derided his attacks on health clinics and criticized his extreme anti-abortion philosophy: "Abbott's positions are so extreme that if a woman is raped and becomes pregnant as a result, he does not believe in her own ability to choose what is best for her and her family after that tragedy."

Greg Abbott is an avid proponent of unnecessary voter ID laws. He has been unusually candid about his direct efforts to manipulate the vote. When the Supreme Court overturned key aspects of the Voting Rights Act this summer, Attorney General Abbott wasted no time at all, tweeting just minutes later that he planned to go ahead with several voter suppression measures now that he didn't need approval from the Justice Department.

In a brief he filed in a federal court after the ruling, he even went so far as to freely admit that Republicans had re-drawn voting districts for the express purpose of "increas[ing] the Republican Party's electoral prospects at the expense of the Democrats."

While gerrymandering doesn't violate the VRA, it does actually go against the First Amendment. Freedom of Speech ensures that the votes of people with one viewpoint don't count more than votes by people with an opposing view. Unfortunately, the Supreme Court has yet to agree to hear a case against it.

In Abbott's mind, the fact that the Justice Department is now trying to walk-back his voter suppression efforts is an "affront" and is "hostile to the Constitution." In reality, he's the one who is threatening the integrity of the vote.

3. He is bad for the environment

Given his record, it's no surprise that Abbott's 2010 campaign was heavily funded by oil and gas interests, including $40 thousand from Koch Industries and $10 thousand from ExxonMobil. Over the past few years he has sued the Obama administration several times, challenging EPA findings and resisting efforts to reduce greenhouse gases.

Abbott is a climate change-denier, choosing to believe "Climategate" scandals over real, measurable, peer-reviewed science. In a petition he filed against the EPA in 2010, he accused climate scientists of being "colluding and scheming" activists, manipulating findings to "advance what they want the science to be." Abbott clearly has no understanding of the scientific method or professional integrity.

When it comes to the environment, he is someone who has shown that he is willing to make far-reaching decisions without considering the facts or the possible consequences. Example: In 2011 when President Obama put a temporary hold on off-shore drilling after the BP/Deepwater Horizon oil spill in the Gulf of Mexico, Abbott sued the administration to overturn the moratorium. What better way to make a bad situation worse?

When he sued the Environmental Protection Agency (one of the several times he's done so) in 2010 he was attempting to fight industrial greenhouse gas permits. Texas was the only state to refuse to participate in the permit program, claiming that the EPA was "not legally authorized to regulate greenhouse gases."

Although he did not consult any climate scientists in making his case, it seems he tried to paint himself as plenty expert enough. He argued that the EPA shouldn't be regulating greenhouse gases because that's just stupid. "One of the key greenhouse gases the EPA is regulating is carbon dioxide," he argued. "It is almost the height of insanity of bureaucracy to have the EPA regulating something that is emitting by all living things."

4. He is bad for justice

In 1991, a fire killed Cameron Todd Willingham's three young daughters. He was found guilty and executed in 2004. In 2009, the Forensic Science Commission challenged the arson conviction, but when Governor Perry replaced three members on the commission investigating the execution, progress stopped.

Attorney General Abbott further derailed the investigation by announcing in 2011 that the FSC was barred from any further investigation into the Willingham case or "issuing any conclusions about the conduct of arson investigators in the case."

His binding legal opinion stated that the commission "can only investigate cases that involve evidence tested in state-accredited crime labs since September 2005, when it was created." Thus, Willingham's case cannot legally be investigated anymore.

Why did he do this? I don't know. But it clearly shows he's willing to ignore a compelling case of wrongful execution.

5. He is bad for students

This image is an ad that Greg Abbott put on his Facebook page in March to promote for his campaign for governor. Rick Perry hadn't yet announced that he wouldn't be running for re-election so the ad aimed to show supporters that Abbott was just as much of a gun enthusiast as the current governor. But this isn't an ad for enthusiasm; it's an ad for extremism.

Conservative blogger Ginger Russell wrote about CSCOPE after her mother, Janice VanCleave, a tutor, became suspicious of why she couldn't access a student's lesson plan online. "One would never imagine that for the last seven years students all across the state of Texas have been indoctrinated with a pro-communist, pro-Islamic curriculum called CSCOPE," Ginger wrote.

While state law requires that schools teach students about a variety of world religions, including Islam, some felt that CSCOPE's curriculum was too "pro-Muslim." This was actually investigated in December 2012, where they found there was a bias against Islamic extremism. The program was also criticized for encouraging students to think critically about various forms of government.

Despite obviously being an over-reaction from conspiratorial bigots, it was important enough to Abbott to appease any possible Tea Party opponent that he wasted state time and money, promising to "shut them down completely" if he found anything illegal in CSCOPE. Which of course he won't.