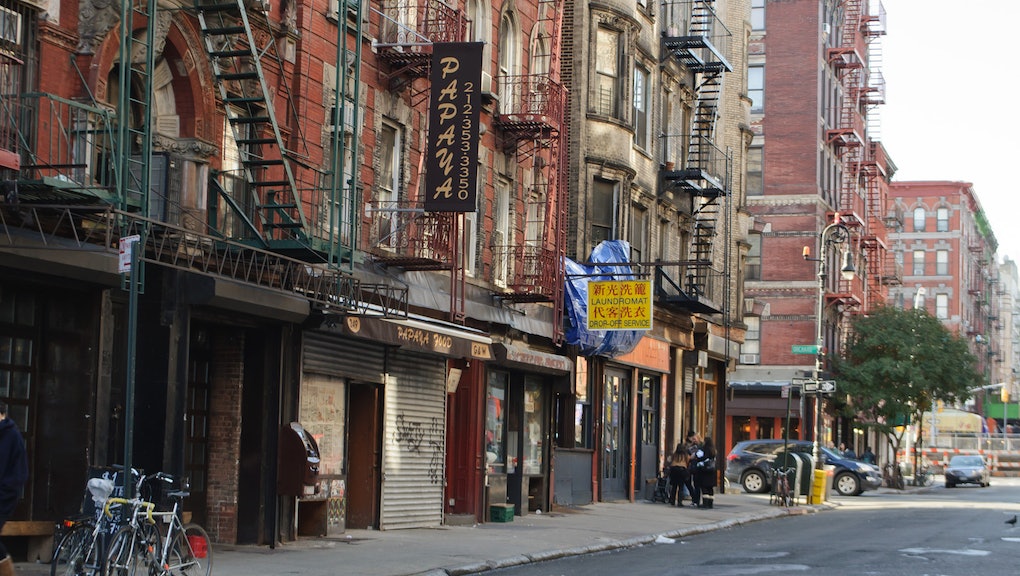 The Rent in NYC is Too Damn High, and the City Desperately Needs Solutions

Shannon Deep’s story is not unique in New York City. The dramaturge and freelance writer is one of an estimated three million New Yorkers who live with multiple unrelated roommates, just to be able to afford rent.

“I don’t know anyone who lives by themselves. That includes people my age and younger, and includes people much older than I am,” said Deep, who lives with her boyfriend and two others in a four-bedroom apartment in Manhattan. Living arrangements like Deep’s have increased 40% between 2000 and 2010, which is a trend that tells a sad tale as to how housing in New York City is in dire need of repair.

The increase in these types of living arrangements has been caused in part by the rise in rental fees. According to a report by The Furman Center at New York University, “the median monthly rent citywide increased in real terms (in constant 2012 dollars) by 8.5%, from $999 to $1,084.”  Manhattan has seen the biggest increase, at 13%. After already having their rent raised $200 last year, Deep and her friends will not be able to stomach another hike in rent. And for her, moving out of the city is not an option.

“While I would love to [move outside NYC] for practical, financial, sanity reasons ... if I want to keep doing what I am doing, if I want to continue doing what I love, what I’m good at, I will have to stay in the city,” said Deep, whose career has kept her in the city. Other young people who have fewer ties to the city will surely make like Canadian geese and fly away, except their migration will be permanent. A poll conducted by Marist College found that more than a third of New Yorkers under 30 plan on moving out of the state. Those numbers should not surprise many.

The city has rent-control regulations, but finding a subsidized home is becoming harder to find. In the past three decades, more than 230,000 low income housing units have been lost in New York City. Compounding the problems of the program, more than 160,000 families sit on a waiting list to move into housing that is far too expensive to seriously be considered affordable.

The solution according to some is inclusionary zoning, but that system has not given the results many poor and middle-class families have hoped for. Inclusionary housing was a program developed by the Bloomberg administration to offer incentives for developers to include low-income housing in their developments. However, the voluntary initiative, installed in 2005, has to date resulted in the construction of low-income housing in only 2% of new developments. Current Democratic mayoral candidate Bill de Blasio has made a mandatory version of inclusionary zoning part of his campaign platform, but the initiative has never been tried in New York before, and there's no telling whether it will deliver the intended results.

According to one expert, the issue of the increasing unaffordability of housing is the result of “a combination of high property values and lack of political will.” Dr. Joseph Heathcott teaches urban studies at The New School in New York City, and he believes the Bloomberg administration's inclusionary zoning plans do not do enough to provide adequate housing for poor and middle class New Yorkers. In an email interview I conducted with him, he wrote: “Arguably the middle class in NYC has been squeezed the hardest in terms of housing availability. And while we do have 800,000 units of public housing for low-income families and seniors, it is not enough.”

The solution is not an inclusionary housing plan that is mandatory for anyone who wants to build property inside the city. Forcing developers to include low-income housing could present a constitutional challenge, like rent control already has, or a freeze in development. The city should instead give rental subsidies to low-income families, and build more housing on city-owned land. A similar program worked for the Coalition to End Homelessness, and a citywide program, if run properly, will have the same results.

Without a greater supply of affordable housing, New York City could drastically change. Heathcott believes the magic that brings people from all over the world to the Big Apple could evaporate if rents continue to rise and residences become hard to find. The risk according to Heathcott is that lower-income families will not being able to save or gain any wealth due to high living expenses, and that more families will live like Heep and her friends do, bunking up in high numbers due to the increased lack of housing. It is a future New Yorkers can’t afford.

“New York City will cease to be valued as a place of opportunity, whether for immigrants, job seekers, or young 'creatives,'" Heathcott said. "That has long been what made our city great, and we risk losing that.”