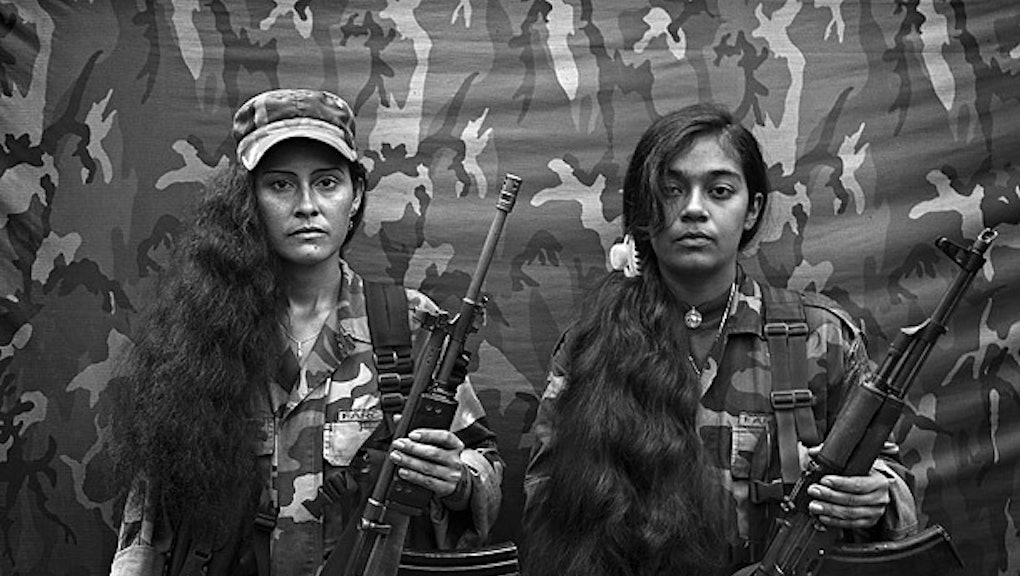 Colombia's FARC Rebels Say They Support Women, But the Truth is Much More Sinister

Combat injuries cost her a breast and the sight in one eye, and have left her with scars and bullet wounds across her face and arms. As a commander in Latin America’s largest insurgency – the Revolutionary Armed Forces of Colombia (FARC in its Spanish acronym) – Elda Neyis Mosquera, alias “Karina,” had an $800,000 bounty on her head by the time of her capture. While at large, she commanded 350 soldiers and was wanted on charges of extortion, kidnapping, and involvement in a string of massacres. Fearing betrayal by her own troops, she surrendered herself in 2008 after her immediate commander’s own bodyguard killed him for a bounty.

Women have participated in Latin America’s leftist insurgencies for decades. Brazil’s president, Dilma Rousseff, was brutally tortured by the police in the 1970s due to her involvement as an urban guerrilla. Within Sendero Luminoso, which controlled swaths of Peru’s countryside until the 1990s, some 40% of combatants were women, as well as half of its central leadership. An estimated 30 to 40% of the 8,000 FARC rebels are women, with some in positions of command. The rebels are currently negotiating a peace agreement with the Colombian government, with gender equality as one of their goals. Just last week, the rebels launched a website that publicizes the role of women in their cause.

This public relations scheme seeks to obscure the horrific crimes perpetrated by the FARC against women, even those within their own ranks. Credible reports reveal a glaring hypocrisy concerning the insurgents’ rhetoric of female empowerment and its history of sexual violence. This situation is symptomatic of a critical dilemma for the rebels as they negotiate an end to nearly 50 years of conflict: They are trying to project themselves as legitimate political actors when, after decades of bloodshed, the bulk of Colombians consider the insurgency to be little more than a terrorist organization.

Perhaps the FARC’s most famous woman member is Tanja Nimeijer, a Dutch national who joined the Marxist insurgency after becoming disenchanted with capitalism during her travels in Colombia. Nimeijer’s story has fascinated observers worldwide, and she has used her celebrity to promote the FARC’s doctrine of social justice and class equality. But in 2007, a raid uncovered her personal diaries, revealing deep reservations and frustrations with the guerrillas’ leadership. Her grievances included the prevalence of sexist, machista, attitudes.

How will it be,” Nimeijer asks, “when we assume power? The commanders’ girls in Ferrari Testarossas, with breast implants and eating caviar? That’s how it seems."

Nimeijer’s accounts pale in comparison to the stories of many of her female comrades. For decades, the FARC has recruited thousands of child soldiers. Many of them are girls, who are highly vulnerable to sexual abuse within the rebels’ ranks. “Most female recruits, regardless of age, are forced to service male guerillas in an effort to maintain morale among the male troops and avoid the security risk that comes with the men venturing into town to consort with civilians,” says Anne Phillips in Foreign Affairs. A widely-circulated report asserts that over half of Colombia’s child soldiers become sexually active before their 13th birthday.

Conscripts are prohibited from having children, though the rule allegedly does not apply when a commander is the father. One Colombian newspaper estimates that 1,000 forced abortions – many of them late-term – occur each year in FARC camps, nearly always in deplorable jungle conditions.

The FARC have also been criticized for using rape as a weapon of war (as have Colombia’s military and paramilitary groups). Colombia's Office of the Attorney General reports that, of the cases it has studied, roughly a third of these rapes occurred in the presence of the victim’s children.

For months, the government and the FARC have been unable to arrive at an agreement over the rebels’ ability to participate in politics, the second of six points on the negotiators’ agenda. The FARC assert that they are legitimate representatives of Colombia’s rural sector, resorted to violence only in self-defense, and will not lay down arms until they receive a guarantee they can continue their struggle in the political realm. But after the scores of human rights abuses perpetrated by the FARC, a vast majority of Colombians would not tolerate rebel leaders running for office. This makes it politically costly for the government to grant them concessions, thus stalling negotiations.

Colombia desperately needs peace. But the gaping divide between the FARC’s public discourse and its actions have made a peaceful solution exceedingly difficult to achieve.