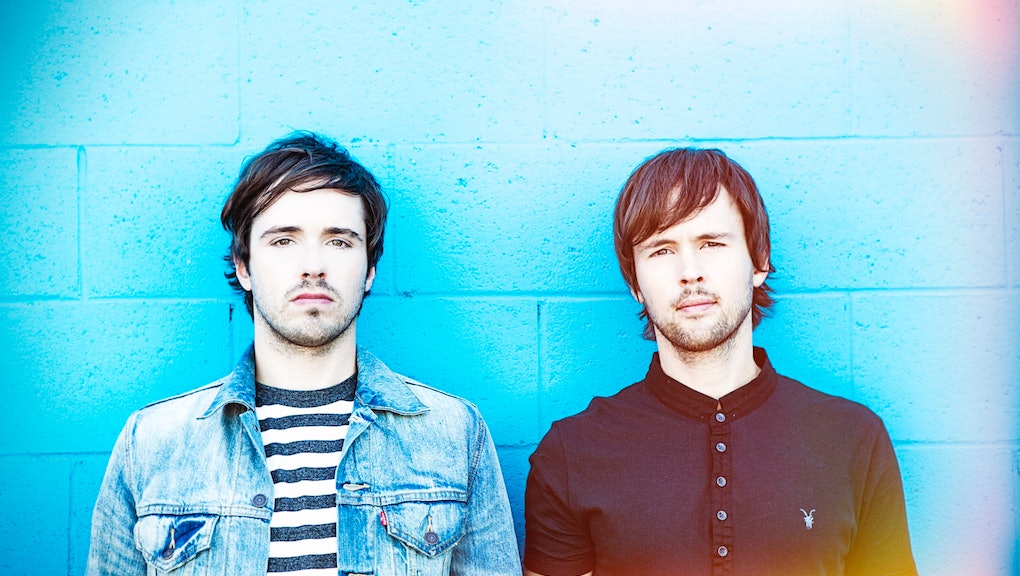 Atlas Genius has gone from being an Australian indie band to an international, chart-placing sensation in less time than a Kardashian marriage. Keith Jeffery, the vocalist in the group, talks to PolicyMic about his roots, the music, and the future.

Evan Almeida (EA): Who came up with the name of the band, and why is it Atlas Genius?

Keith Jeffery (KJ): That was actually a democratic decision that was decided on by the government of Australia. All bands are issued official "band names" and they come from the Prime Minister and that's how that happens. We get no say in the matter.

EA: Wow! I have never heard about that, that's really interesting.

KJ: Oh yes, we have our Communist Music Regime over here … that's actually not true; it's a pretty fair system.

EA: I guess that you learn something new every day. What was your musical background like, who are your influences?

KJ: It's so varied! Well, growing up I went through a period where I was just totally obsessed with Led Zeppelin; it was all I listened to when I was 14 and 15. Nirvana was a big influence as well. I guess that all of the stuff that I was into when I was young — the whole teenage aggression thing — lasted until I slowed down and developed more of a taste for musical structure. That's when I started to re-visit the Beatles and the Police. So my taste in music was really just all over the place. I really enjoyed the whole singer-songwriter thing as well. Listing to James Taylor was a big influence. So I guess that my influences really are varied.

EA: What is it like to perform and write music with your brother, does that family connection ever cause tension in the band?

KJ: I think for the most part it's a real bonus to be able to write and perform music with someone that you share genetics with. We have such a strong connection — I mean, obviously, we are related — we grew up listening to the same kinds of music. We have very similar tastes, we aren't identical but it's pretty close. It's a real fast-track through the song-writing process. If I tell him that he needs to do a specific drumming thing — for instance — he gets where I'm coming from. So I think that, the musical connection far outweighs any of the negatives of working with a family member.

EA: What was the experience of transitioning from Australia to the US like?

KJ: It was a little daunting, initially, because it was the unknown. We had never been in America until we had gone to sign with a label. When we came to talk to the record labels, it was the first time we had been over. We went from that first visit to touring for 14 months in America with very little break. Right now, America almost feels more comfortable than Australia (just because of all the time we've spent here). We've also found American crowds to be extremely warm and receptive, so after the first couple of months, we started feeling really at home.

EA: When you were young and living in Australia, did you ever imagine that you would one day make an album that would reach the number 34 spot on the US Billboard 200?

KJ: Well … no. I think that when you're a young musician, there's a naïveté where you believe that success will happen and it will happen quick. But, it just doesn't happen "quick." After years of writing, putting on shows, and going through all of the trials and tribulations that musicians go through, the band really became a labor of love for a while. There were no guarantees. Well, there are no guarantees in life as a whole, but I feel as though if you were to go into a position with the least amount of guarantee, being a musician is that position. After a few years, you begin to think of music as more of a hobby, or a passion, rather than anything that you are going to make money out of. But sometimes you do get surprised and have things work out.

EA: You were first discovered in the US by the Sirius XM Channel AltNation after they began to play your single, "Trojans," iTunes users downloaded the song 45,000 times (seemingly without any promotion from the band). How did it feel to have that kind of fan base before you even began to tour?

KJ: I think it was 45,000 before we signed, I think it's closer to 400,000 copies now. I think that there was something very satisfying in that first 45,000, though, because it happened before a record label was involved. That success was just due to the strength of the song and the airplay it was getting on AltNation, rather than a bunch of Katy Perry — or Miley Cyrus — style marketing and gimmicks. It was all just the song and the music. We aren't some glam rock band, where the performance is what matters; we are just very focused on the music. The success did offer us some validity about the path that we had chosen, and that did feel good.

EA: What was your definitive 'I think we've made it' moment?

KJ: Honestly, I still don't think that we've 'made it.' You're only as good as your last record. I feel that, as a band, we are all about what we can do next and how we can improve for the future. The little things are great, though: from headlining a tour, to playing on Letterman and Fallon. Obviously, for a band from Australia, that's a pretty big achievement. Also, doing Lollapalooza was big. But I think that it's a part of human nature to be always looking for the next thing and to try and achieve something greater. You always want to grow and get better, even at the risk of not being able to stop and smell the roses from time to time.

EA: Atlas Genius went from opening for Imagine Dragons to headlining your own tour; what can fans of Atlas Genius expect out of your "Ones to Watch" tour with Dale Earnhardt Jr. Jr.?

KJ: The real difference between playing a headlining show and a support show is the ability to play for as long as we want. Touring with Imagine Dragons and the Silversun Pickups was great for us, but we weren't able to play the entire album. We only ever had a 30 or 40 minute set. Now, the set is closer to 70 minutes and it gives us time to play and jam a bit, and play the show the way that you want to. It is the full Atlas Genius 'experience,' rather than the short, condensed version.

EA: Which songs on your debut album, When It Was Now, do you personally like the most?

KJ: I'm going to answer that in two parts. Firstly, they're all our babies, and I always feel that I'll have a strong connection to all of them because we poured our heart and soul into the songs. I do feel like there are a couple of songs that really satisfy me as a songwriter and as a human being that is trying to express myself while writing these songs. I think that "Centred on You" was very personal, and it was a slight departure from the rest of the album and I enjoy that. "Trojans" was the first single to come out, and I'm very proud of that song.

EA: What are the plans for the future of Atlas Genius?

KJ: Well, we're touring until the middle of November in the states, and then three days after that we are touring in Europe and the U.K. with Imagine Dragons again for a couple of weeks. After that, we're going to take some time off and start working on the next album. It's a great way to rest.

EA: Well, thanks for taking the time to talk to me.

KJ: No problem, see you then and have a good day.