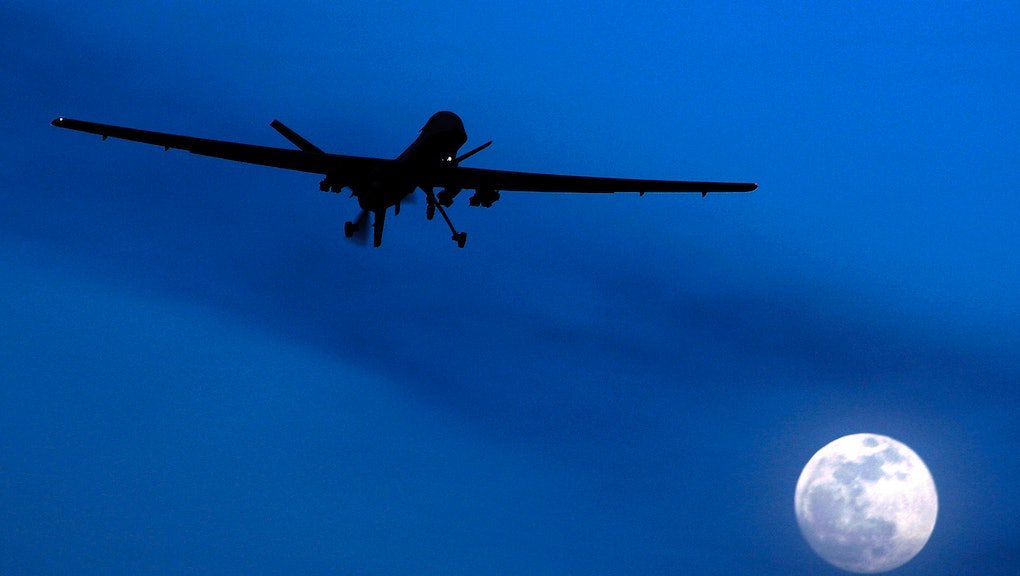 An Inside Look At the Most Terrifying Thing About U.S. Drones

Unmanned aerial drones have been used for more than a decade to hunt suspected terrorists in Afghanistan, Pakistan, Somalia, and Yemen. But the exact death toll from drones is almost impossible to calculate. This will have dark consequences as the United States increases its reliance on drones as its weapon of choice in the war on terror.

Last Friday, a UN human rights investigator said that Pakistan has recorded 2,200 deaths by drone strikes in its Federally Administered Tribal Areas since 2004. The UN official said the refusal of the U.S. to release its own official figures has allowed drones to operate in an “accountability vacuum.”

Numerous U.S. officials support the drone program without reservation despite the murkiness of the data available. Sen. Lindsey Graham (R-S.C.) said earlier this year that drone strikes have killed 4,700 people. Sen. Graham was quoting the highest estimate reported by the Bureau of Investigative Journalism (BIJ). But he was also citing a low figure because the BIJ does not include casualties from U.S. Military drone strikes.

The U.S. is also somewhat hazy when it comes to distinguishing between civilians and militants — military-age males killed in drone strikes are labeled enemy combatants if they are in the proximity of targets. This is bleak news for civilians, who are supposed to be protected because of the precise nature of drone strikes.

Frustrated by the absence of concrete figures, several organizations have compiled their own body counts in an attempt to accurately measure the effects of drone warfare. Their findings indicate just how little we really know.

The figures reported by Pakistan to the UN fall on the lower end of the casualty estimates for the country. The Bureau of Investigative Journalism lists the number of Pakistanis killed by CIA drone strikes between 2004 and 2013 at 2,525-3,613. Civilian deaths range from 407-926. Reporting on the same period, the Long War Journal (LWJ) records 2,708 deaths, with civilians composing 155. The New America Foundation records between 2,065-3,404 deaths, with civilians composing 256-307.

In Yemen, where U.S. covert action operates at a lower-scale, the body count between 2002-2013 is listed by the BIJ at 268-397, with 21-58 civilians. According to LWJ 473 people have been killed by drone strikes in Yemen, including 84 civilians. The number is likely higher because the Yemeni government has a record of covering up U.S. drone attacks.

The broken state of Somalia is another site of covert drone strikes. According to the BIJ, drone strikes by the CIA have killed 7-27 enemy combatants as well as up to15 civilians. The difficulty of reporting accurate casualty figures for drone strikes is compounded in countries that lack effective central governments; it’s even worse when there’s an ingrained hostility toward the press.

In Afghanistan, drone strikes have been on the rise as the U.S. prepares to shift the bulk of its ground forces out of the country. According to a UN report, drones strikes increased by 72% from 2011 to 2012. Several high profile strikes this year that killed over a dozen civilians have drawn international concern, but inquiries have been slow to follow.

These figures should all be taken with a grain of salt. A study released by Columbia Law School revealed that media outlets are the best source of information for counting drone strike deaths. But the study also acknowledged the drawbacks of relying on news gathering organizations to provide accurate figures for body counts.

At least one media outlet has found an additional way to verify their body count: the BIJ has identified and named 568 drone victims in Pakistan. The BIJ’s “Naming the Dead” project is drawing attention to the fact that the vast majority of drone victims remain officially unidentified, including civilians killed by accident.

CIA Director John Brennan has stated that the CIA and the Department of Defense are attempting to make drone operations more transparent for the public — a shift that he says will be complete by 2014. For the better part of a decade, information on this dimension of the war on terror has been kept from the public eye. This can no longer be the case — immediate transparency is imperative if we want to create any sort of meaningful regulation for drone strikes.