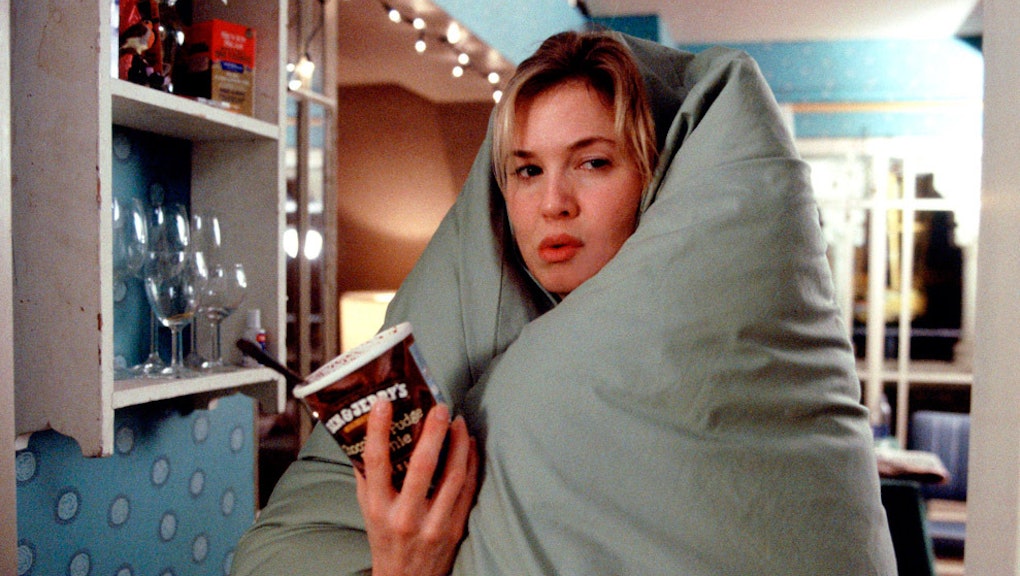 Having a fit about Bridget Jones not being a proper feminist kind of lumps you in the same category as the sad housewives (whose Rabbits are clearly out of batteries) who stalked and threatened Charlie Hunnam's life for being cast as Christian Grey in the Fifty Shades of Grey movie. It's that classic, delusional thrust into fantasy that any sad person makes. And, upon hearing the death rattle of whatever aspect they're trying to drag back into reality with them, they cry like a toddler whose milk isn't chocolate-y enough.

Now, the Fifty Shades ladies are clearly just sad they don't get to play "what's the safe word" every night, so their sadness is really just what feeling sorry for yourself looks like. But women getting upset about Bridget Jones' brand of feminism are acting out over a real problem, just in an unproductive way.

That problem is today's complex state of feminism. It seems we live in a time where women are allowed to do whatever men are — if they are privileged enough to have access to the resources necessary for a woman to accomplish those things. That doesn't mean that they still don't face sexism and inequality, but something even more sinister has been woven into the fabric of female empowerment, and that is the idea that there is an ideal feminist woman. Women publicly shame others for being too slutty, too prudish, too hardworking, or not hard working enough. For the most part, feminism is exclusive to privileged women (and by that I mean that feminism is literally a life-threatening choice for women in some parts of the world), and it's made us all start acting like privileged twats. Now even fictional characters aren't safe from catty side-eye anymore.

As Hadley Freeman pointed out in The Guardian, it's a whole new breed of delusional to hate a fictional character for not being a reflection of your own womanly ideal. Freeman, perhaps, at points confuses what it is to identify with rather than to base one's existence off of a fiction. Nonetheless, she raises an excellent point: "I have never heard a man describe himself as 'literally' a Nick Hornby character, or blame Hornby for the demise of masculinity, whereas even though Fielding never set out to define a generation, her character is still meant to be everything to every woman."

This incapability of some women not to entirely relate everything to their own lives is a gross symptom of the world we live in. Having sat through many a seminar in college while my female peers ranted on the lack of feminism in Jane Austen, or Nabokov, or Faulkner because they were incapable of historically contextualizing a text, I can also say that this phenomenon is not exclusive to one Ms. Bridget Jones. But Jones is the current fuel for the fire, and Freeman's colleague Suzanne Moore epitomized the whole sad issue when she wrote, "Why I Hate Bridget Jones" (I wonder what those break room conversations are like now). Moore doesn't take issue with the author or readership (except to perhaps take a moment to distinguish that she is too smart to be one of them), but quite literally the character herself.

Moore claims, "Bridget's much-vaunted independence, gained on the back of the feminism of the previous two decades, manifested chiefly as the freedom to get pissed, appreciate her female friends and speak openly of her sexual desires." So if I decide to consider my freedoms to yell at mean people in public, talk about which lubricants work best, and enjoy a panini with some gal pals a form of liberation, I'm now piggy-backing off of the feminism of the past? Oh, I'm sorry, I thought we were supposed to enjoy the freedoms that the women who came before us fought for. Or would you suggest that we wear stones around our necks everyday to remind us of their struggle?

I do agree with Moore, however, that there is a narcissism endemic in liberated women, and yes, we are consumer-crazed and relationship-obsessed, but isn't that the fate of the Western world? Should the weight of those faults sincerely be placed exclusively on the backs of women? Enough questions, because no, it should not. And furthermore, (OK, one more question) in what world is Bridget Jones considered independent? Because — and perhaps this is because I came of age once Jones was already on the silver screen — I always assumed that Bridget was a hero to women because she was so flawed. Her rampant insecurity and neuroticism made other women feel a little bit better about their own.

Ultimately, it's hard to decipher exactly why these women hate poor Bridget so, but it's certainly clear is that these 30-somethings are very intent on telling us all who we should be as women. Is that a trait of women whose 20s are in their rear-view that I will one day be fated to face? Is the regret so pungent after 30 that you are only capable of telling everyone what they're doing wrong? Because as I get further and further into my 20s, that is a phenomenon I'm getting more familiar with, in and out of print. Will I someday harbor as much resentment for a show as these women also do for Sex and the City (both writers made a point to bring the show into their pieces)? Because, yea, Carrie bought a lot of shoes, get over it.

It's uncertain what's a more reductive argument: that Bridget Jones is not a feminist and is therefore condemnable, or that she's no longer relatable to today's women and therefore a terrible literary character. Whichever way you slice it, those are both silly things to say about a work of fiction. Even more surprising, those statements are coming from published writers who should know how to — oh, I don't know — read a book. Regardless, the latest and last installment of the iconic Bridget Jones series is making women as emotional as Helen Fieldings' mousy heroine when she really needs a "fag" (which, for her, meant "cigarette" in Brit speak, but we all know she really could have used a gay bestie to tell her that only Kate Moss can wear a wet slip in public).