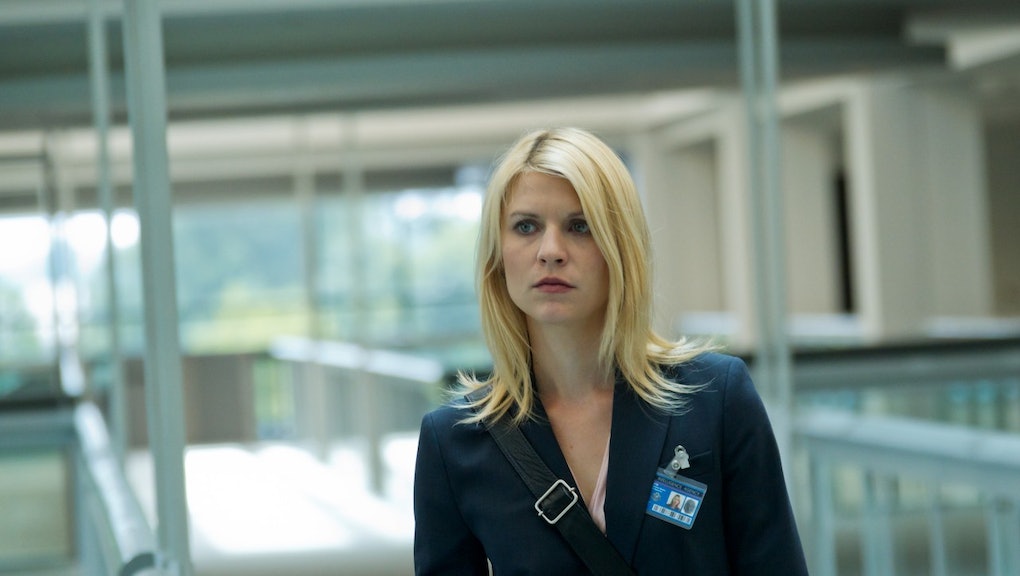 'Homeland' Season 3 Episode 4 Recap: All is Not What it Seems in "Game On"

Major Spoiler Warning: Don't read this until you have watched Homeland season 3, episode 4, "Game On."

The pointless romance between dopey Dana and dark-eyed Leo; the CIA salivating at any chance to gang up on Carrie ... again; Leo's one-dimensional parents delivering cardboard line after cardboard line. It all felt bleak and worse — uninteresting.

But what last night's Homeland episode, "Game On," showed was that all these loony cul-de-sacs were, in fact, leading the show in a good direction. Sort of. Thanks not only to the twist ending (which was a stretch, to put it lightly), but also to the more meditative moments, the show seems like it may be redeemed. I'm temporarily bracketing my past recaps' indifference to Dana's subplot on the grounds that this episode exhibited some nice introspection and allusion amidst all of Leo and Dana's absurdity (see below).

I mean, come on Dana, if you're on some half-assed escape with your fratricidal man-boy (just take a look at that DOB), and you say, "they're going to catch us anyway," and subsequently trade in your mom's perfectly nice Outback for an ancient Camry because you panic for a moment ...

… well, you might want to hold off inhaling that stuff you've got there.

"Game On" kicks off with what seems like a shoddy attempt at metaphor: in the middle of the night, Carrie suddenly awakes in the psych ward to the screams of a woman. She quietly makes her way towards the cries of resistance and comes to a room where several personnel are sedating a thrashing blonde. At first glance, it's nothing more than cut-rate foreshadowing: the crazy blonde shows what may become of Carrie if she remains in the ward. But this is a misleading reading, because there's a twist behind Carrie's imprisonment.

Carrie and Saul are privately in cahoots with the psych-ward act. Carrie's ostracization was, in reality, an elaborate ruse meant to bait the elusive Majid Javadi.

The twist places the episode and, indeed, the entirety of season 3 thus far, on an entirely new meta level. Carrie the character is an actress, too.

Carrie has effectively duped the audience for the past four episodes (although it's still unknown when exactly she signed onto the plan). What we thought was trite and pointless suddenly seems to make sense now. The thrashing blonde that kicked (and screamed) off the episode? Yep, a clever sleight of hand to divert us from the fact that Carrie was exactly where she meant to be, albeit with the small emotional hurdle of actually being there.

The best part? Saul's sinister actions, we now come to realize, were only meant to throw off Javadi, the law firm, Dar Adal, and potential informants. Come on, how much of a relief was it to see Santa Saul again?

And Carrie's going to the press back in episode 2? Likely a double whammy: a vehicle to get her "betrayal" on record (and out to Javadi), and a way to get the audience to believe that Carrie was indeed going rogue. You can draw similar conclusions from Carrie's restaurant scene in the season 3 premiere.

It's been a challenge deciding whether a television show that purposefully "disappoints" its audience with dead-end direction for the better part of four episodes only to turn everything on its head is brilliant or idiotic. I'm leaning toward a more nuanced flawed-but-sort-of-brilliant here.

In fact my What Crazy Thing Did Carrie Do This Week? segment has been shot dead with the culmination of "Game On." It was supposed to be when Carrie, released from the psych ward with the help of Javadi's law firm, rushes to her house to grab her passport and belongings for what we assume is a futile escape attempt.

So yeah, Homeland's gone meta, but what about those introspections and allusions mentioned earlier?

In Xanadu did Kubla Khan

Where Alph, the sacred river, ran

Through caverns measureless to man

Down to a sunless sea.

But oh! that deep romantic chasm which slanted

Down the green hill athwart a cedarn cover!

A savage place! as holy and enchanted

As e'er beneath a waning moon was haunted

By woman wailing for her demon-lover!

It's hard to miss: "demon" in "demon-lover" can act as a stand-in for both Leo and Brody.

Curiously, Dana stops at "Down to a sunless sea," pausing, skimming the poem and saying, "And then it goes on." At the risk of sounding hackneyed, I'll just go ahead and say it's quite poetic for Dana to stop reading before reaching those two poignant lines in the second stanza: "As e'er beneath a waning moon was haunted / By woman wailing for her demon-lover!"

Those eerie words conjure Carrie and Brody's affair in season 1. Parallels can be drawn to Leo and Dana: both "couples" crave an escape from their confinement and both women can be deemed "demon-lovers."

How much of a demon are Leo and Brody? What's the next step in catching Javadi? Will we see more of Virgil? How many more of Jess' platitudes can we take before we change the channel whenever she comes on?

We'll find out in the upcoming weeks.