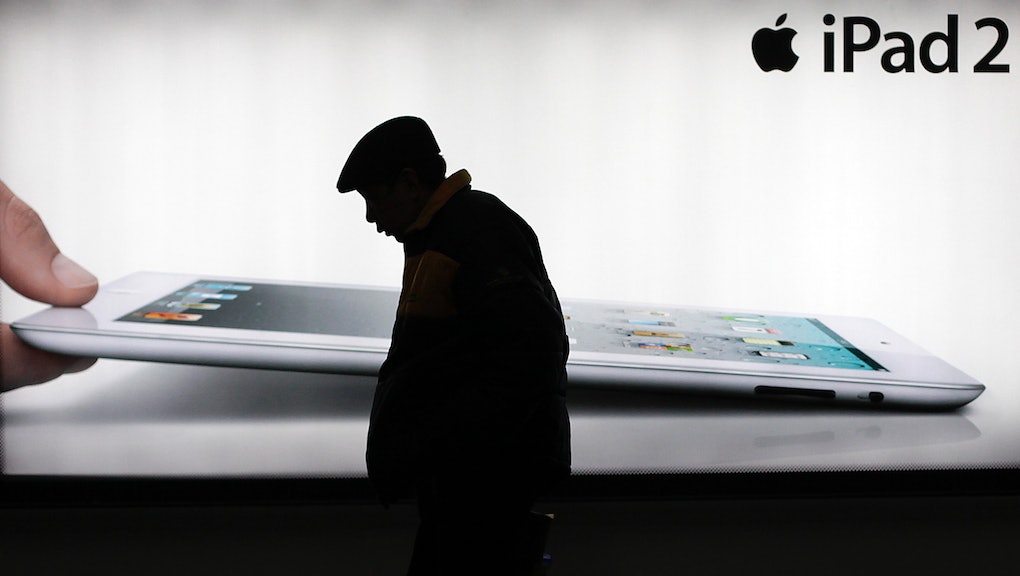 Apple, Nokia, and Microsoft Unveil Tablets: Can Humans Keep Their Humanity In the Techno Age?

The headline of the new Huffington Post article says it all:

As Apple, Nokia, and Microsoft all prepare to unveil new tablets on Tuesday, this succinctly summarizes the root of our generation's dilemma. While we naturally lap up the benefits and conveniences that come with technological progress, are we prepared for the more intangible costs?

The irony of posing this question as I write for PolicyMic, one of the fastest-growing online news sites in America, is not lost on me. Indeed, I feel it makes me (as well as any other regular pundit for this site) something of an expert on the pros and cons of the digital revolution. That is why I've composed this helpful list on the four ways you can keep touch with your human side even as you dive into the cyber world of the future:

1. Remember that you're talking to other people.

The one complaint I hear most often from other pundits on this site — to say nothing of users of Facebook, LinkedIn, the plethora of dating websites, and other internet forums that foster interaction — is that the anonymity of online interaction brings out the worst in people. It's all too easy to forget that the collection of pictures and words in front of you at any given time represent an actual flesh-and-blood person, with thoughts and feelings and a life story of his or her own. Instead we tend to treat these individuals as ancillary characters in stories where we feature as the protagonists, with occasionally less-than-flattering consequences. As a rule of thumb, remember: If you wouldn't say it to a person's face, don't write it online.

For every advantage wrought by the internet revolution, an accompanying disadvantage can always be found. Do you love the speed with which you can develop genuine name recognition for producing high quality online content? Be careful, because any dumbass product you produce here — a sub-part editorial, an embarrassing Facebook picture, a particularly heinous message board comment, an unflattering YouTube video — can just as easily be used to destroy your reputation for all time. Enjoy the ease with which you can link up with like-minded individuals? Be careful, because ignoramuses are just as good at navigating cyberspace as thoughtful individuals, and the same connectivity that facilitates networking can be used to fact-check to humiliation those ideas that don't hold up to scrutiny.

3. The internet must be a means to an end, not an end in itself.

To see where this applies, just look at some of the online nomenclature that has arisen over the past few years. Trolls, or people who make deliberately incendiary or obnoxious comments on websites in order to draw attention to themselves and provoke controversy, clearly prefer to stir up melodrama on the internet as a substitute for the lack of meaningful substance in their own lives. Catfish, or people who draw strangers they meet online into so-called "relationships" that they insist on never taking into the real world, are obviously using cyberspace as a substitute for actual sex and/or romance. Paulbots, or people who inject Ron Paul and/or libertarian talking points into political and social conversations even where they aren't relevant, are using the internet in the same way that the wild-eyed quasi-articulate zealots with bullhorns would use soap box oratory on street corners until relatively recently. All appear more credible online than they would in the outside world (one of the perks of anonymity) and, whether they consciously intend to or not, rely on the idea that what happens here can have genuine meaning in its own little world. In truth, anything that would not hold up in regular life should be ignored when encounter here. If you found a troll, a catfish, or a Paulbot in a bar, you wouldn't give that person the time of day. Why do so here?

4. Maintain a healthy dose of skepticism.

As a history grad student, this Whitest Kids U Know skit about a student trying to get away with quoting Wikipedia in a school report pretty much sums it up. While there is certainly no dearth of "information" in the information revolution of the past 20 years, the same can't necessarily be said of "reliable information." Although PolicyMic takes pride in the care with which it vets the stories it publishes for factual accuracy and thoroughness of research (and yes, I am hawking my own site here — self-promotion is another boon of the internet), the same cannot be said of every source. If a story seems too incredible to be true, spend the 10 seconds necessary to conduct a Google search on it before passing it on too others. If a political or cultural news item seems to validate every preconceived notion you have about an issue or personality you love or despise, do some fact-checking from those who espouse the other point-of-view before citing it in your own arguments, just in case you're falling prey to confirmation bias. In short, use the same approach when sifting through online material that students were once urged to employ at libraries: Question everything you read (except for this article, of course).

Hopefully the digital revolution has not dehumanized us to such an extent that I need to elaborate on this one.

While I wouldn't support the transcendentalist naturalism of Henry David Thoreau's Walden, the New England philosopher did aptly sum up the fears of millennials today when he reflected, "Men have become the tools of their tools." Although there is a large extent to which we have reached the state against which he warned more than a century-and-a-half ago, we can at least somewhat offset this phenomenon by keeping our wits about us through the common sense rules listed above.