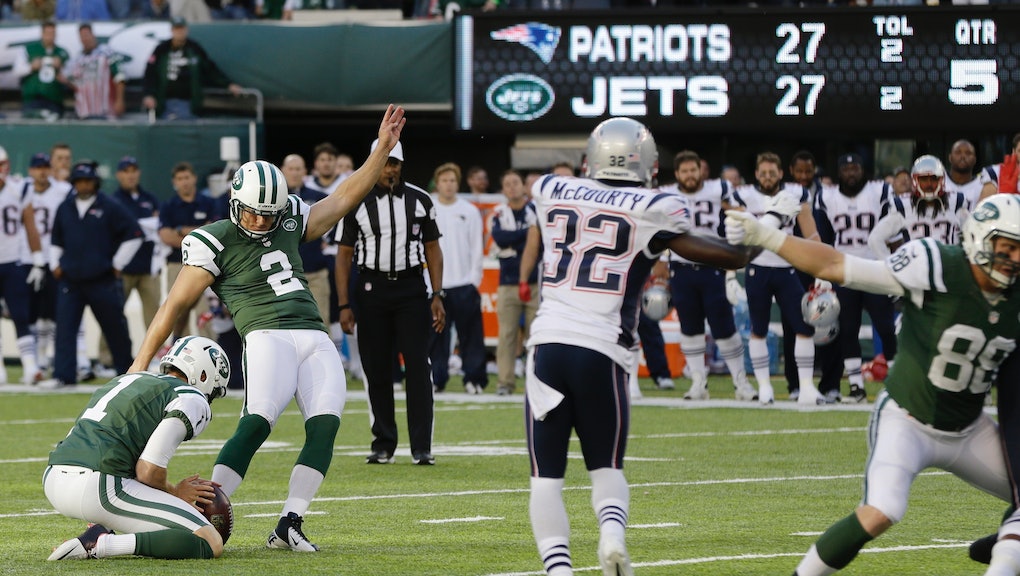 The NFL and Roger Goodell have been known to cover their legal and financial asses from time to time. And don't even ask Terrell Suggs about his thoughts on the commish playing a role in the Super Bowl blackout. But would the league really pull the strings on a regular-season matchup via a dubious officiating rule, and change the rulebook just afterward to support its bogus call?

The answer, unfortunately for Patriots fans, is a pretty resounding "No."

With 5:07 remaining in overtime on Sunday afternoon, New York Jets kicker Nick Folk split the uprights with a game-winning 42-yard field goal, sending jubilation and redemption through the Meadowlands crowd. Just minutes earlier, Folk had missed a 56-yarder that would have given possession back to the rival New England Patriots, allowing Tom Brady another shot at his own game-winning drive and extending the Patriots' AFC East division lead to three games.

But a lone yellow penalty flag drifted into the frame that said otherwise. Officials doled out an unsportsmanlike conduct penalty to the Patriots' defensive tackle Chris Jones, whom they said pushed the back of his own teammate to gain unfair leverage in an attempt to desperately block the kick. Mind you, the kick wasn't even tipped — just badly pulled left. The Jets had a new set of downs, rushed the ball three times, brought Folk back in, and hit the locker rooms with an upset 30-27 victory.

Whether you watched the game or not, you probably weren't thinking, "Obviously Jones must have been in violation of the NFL's Rule 9, Section 1, Article 3," which was just added this year, anyway. It was the first time the penalty has been called.

Patriots Head Coach Bill Belichick, who has had his own run-ins with conspiracy (in 2007's Spygate fiasco) and controversy (in 2002's Tuck Rule), was hypercritical of the referees. You can't blame him either — this wasn't one of those overlooked and obviously missed calls (or something like the "Fail Mary" game). Rather, it had appeared to be a strangely enforced rule that was an incorrect call.

Barstool Sports first stirred up the controversy when they claimed the NFL actually changed the rule's wording shortly after Belichick's press conference, during which the head coach said Jones was on the line of scrimmage. According to the report, Comcast Sports New England's Tom E. Curran took a screen shot of Rule 913 while the coach gave his press conference (and criticism of the refs) around 5 p.m.

Then a second screen shot had shown an updated NFL web page as of Oct. 20, 6:32 p.m., which omitted the "not on the line of scrimmage at the snap" part and, after the fact, had put Jones in "clear" violation.

Since Sunday, and whether one is a Patriots fan or not, it actually seemed plausible that the NFL really "sent their cyber goon squad in to clean up the crime scene."

But as the International Business Times clarified Monday afternoon, the NFL website had removed the "second-level" snippet from a commonly searched article — a section of NFL.com that had suddenly exploded with internet traffic Sunday evening.

The article, which is seen in the screen shots, was not in fact the official rulebook, which simply makes clear that the violation occurs when any defensive player (regardless of where he initially lines up) pushes players on the line of scrimmage. As the IB Times explains, the inclusion and then removal of the now-controversial "second-level" phrase was "purely an editorial decision on the part of the website’s editors, and has nothing to do with the official NFL rule."

It turns out there is only one aspect of a violation of 913 that is relevant: the location of the player who had been pushed.

So while the mysteries behind the Super Bowl blackout may never come to light, we can ease off of Roger, his conniving zebra henchmen, and the No Fun League for at least one more week. Either way, it was a bit peculiar the staff at NFL.com would choose the hours directly after the game the to modify a searchable rule at a time when it was first coming under fire. Then again, the NFL has not been the hallmark of prudent decision-making in recent history.

Sorry, Patriots fans — the loss wasn't a fluke or the beginning of PushRuleGate, unfortunately. It was simply the first time a new NFL rule had been called in a game, and it happened to take place at the most inopportune time: while losing to the lowly Jets.