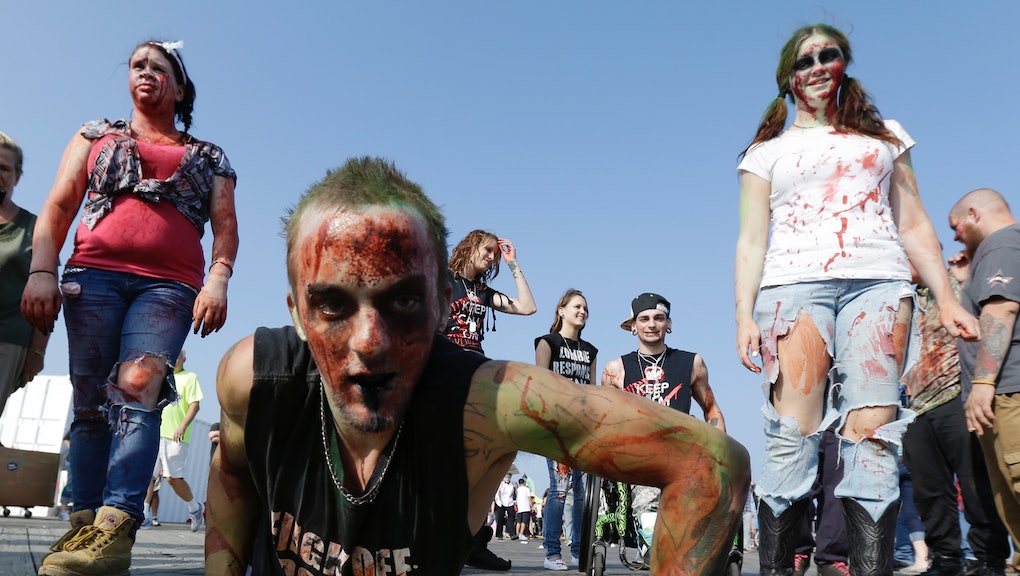 Last Thursday morning on the Fox News website, medical contributor Dr. Manny Alvarez wrote that shows such as The Walking Dead are "seriously hurting American society." Our national obsession with zombies, he continued, "inspires fantasies of monsters possessed by an uncontrollable rage to kill, and viewers get a thrill imagining what it would be like to participate in this new world order." While Alvarez seems to be concerned with confronting violence in the media, his argument actually focuses on a greater scourge: the liberal conspiracy hidden in mainstream entertainment.

One aspect of Alvarez's argument may be plausible. The jury is still out on whether media depictions of violence cause real-world violence. However, the examples he points to — Zombie Runs and an "apocalyptic how-to guide on dealing with a zombie outbreak" published by the Center for Disease Control and Prevention (CDC) — are innocuous. In fact, the CDC uses the national obsession with zombies as a way to educate the population about how to deal with real-life disasters.

Furthermore, in both examples, zombies are distinctly non-human. They are literally monsters. Participants in the runs and readers of the CDC guide don't empathize with the zombies; they relate to the humans who long to survive. This is the opposite of glorifying the violence committed by zombies. The genre provides a way for people to confront violence and hope for survival in an entertaining package. Alvarez acknowledges, "entertainment should help us soothe our brains so that we can ease our minds of some of the stress from our daily lives." This is precisely what Zombie Runs and the CDC guide do.

If Alvarez actually cared about violence in the world, he would focus on it. Instead he then turns his attention on his true target: socialism. "With this country heading towards a socialized system of government, in which officials don't want you to think or focus on what is important for your own personal growth, I'm sure they're more than happy to let you obsess over something as stupid as zombies," he declares, as though the White House is responsible for cable programming.

Rather than focus on actual violence in today's world such as drone strikes in the Middle East and hate crimes against the LGBTQ community, Alvarez chooses to lament our increasingly socialized government. Entertainment media is apparently responsible for turning us, the American people, into zombies who cannot think for ourselves. Not only do conservatives get to blame mainstream media for its liberal bias, now they apparently get to blame the entertainment industry as well.