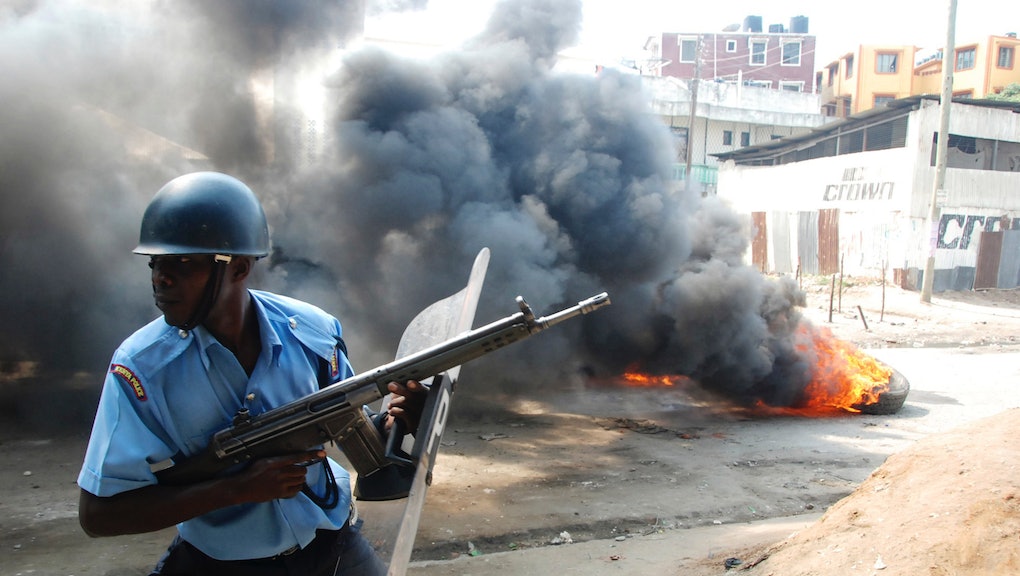 The politics of a government shutdown, budget talks, and debt ceiling negotiations notwithstanding, a permanent War on Terror is one of the few political promises that are actually being meticulously kept these days.

Very quietly and covertly, the Obama administration has begun militarizing Africa at an unprecedented rate. But this mindset of aggression and intervention — representing the overarching bipartisan U.S. foreign policy for at least half a century —  is increasing, not decreasing, the threat of terrorism, and is leaving Americans much less safe.

While the political theater surrounding the shutdown dominated most of the mainstream media coverage for the last month, the U.S. launched raids into Libya and Somalia. The only coverage that these raids received, as Obama's popularity numbers dipped, was to heap praise on the president for his supposed restraint in not sending in drones to the dirty work. The raid in Somalia was not successful, but in Libya, U.S. forces kidnapped Abu Anas al-Liby, suspected of being involved with the bombings of U.S. embassies in Kenya and Tanzania in 1998, and began interrogating al-Liby on a Navy ship in international waters.

The legality behind these raids is very questionable. Leaving aside the politics of it, one can only imagine the outrage if say, former President Bush and several members of his cabinet — who have been indicted for war crimes — were renditioned off U.S. territory.

But what is most intriguing about these recent U.S. interventions into Africa is not how new and out of the blue they appear to be, but how they fit into a pattern of a deliberate U.S. military policy shift towards Africa. In 2006, the U.S. funded and supported an Ethiopian invasion of neighboring Somalia which gave rise to al-Shabab, a militant group with ties to Al-Qaeda. The U.S.-NATO war in Libya in 2011 overthrew a secular Gaddafi government, unleashing a chaotic scramble for power. Libyan and foreign jihadists were happy to fill the void. Mali has also seen a rise in Islamic terrorism thanks to the instability of the aftermath of the U.S.-NATO bombing.

These interventions, however, are only the tip of the iceberg. As journalist Nick Turse covers in extensive detail at TomDispatch, "From north to south, east to west, the Horn of Africa to the Sahel, the heart of the continent to the islands off its coasts, the U.S. military is at work" building drone bases, training militaries, selling weapons, conducting surveillance, running torture dungeons, and arming and funding brutal dictators. African Command (AFRICOM), created in 2007, recognizes 54 countries in Africa. The U.S. is now military involved in 49 of them.

This pivot, I believe, is due to two factors. The Pentagon and national security elite undoubtedly saw the writing on the wall after the Iraq war debacle; this war became increasingly popular, and was quite expensive. A reliance on drones (no American casualties!), JSOC raids, and other less covert means became the preferred method of maintaining the structure of empire. AFRICOM may call these operations "light footprints," but taken collectively, these footprints cover the entire continent and even the ocean surrounding it.

The other factor is China. Beijing's investment in Africa has exploded, and the U.S. response to its threatened hegemony has been a typical one: arm and train African regimes in order to keep them looking to the Pentagon for help, a welfare program to keep African kleptocrats dependent and loyal.

As we have seen with the rise of terrorist groups in Mali, Libya, Somalia and other places in Africa where the U.S. treads not-so-softly, these interventions are already beginning to backfire. U.S. politicians have shockingly jumped on this regional instability to resurrect the terrorist bogeyman. Secretary of State John Kerry, while defending the legality of the aforementioned raids, insisted that any dissent on this view might be construed as "sympathy" for the terrorists.

But Al-Shabab in Somalia and Boko Haram in Nigeria have local agendas, with little interest in attacking the U.S. Not yet, at least. Continued and growing U.S. support for the corrupt Nigerian government and further meddling in Somalia, however, could boomerang this conflict back to our shores. The same goes for increased U.S. intervention elsewhere in Africa.

The politics of interventionism and empire mirror their problems on the domestic front. As the great economist Ludwig von Mises argued, government intervention necessarily begets more intervention to "fix" the previous mess, ad infinitum. Sept. 11 was blowback from previous U.S. interventions, and in response, the war machine was ramped up even more.

This mindset now leaves us with an AFRICOM empire with no end in sight. Either we abandon this militaristic and aggressive interventionism, both in Africa and all over the globe, or face debt, blowback, insecurity, loss of liberty, and a domestic police state as permanent fixtures of American society.