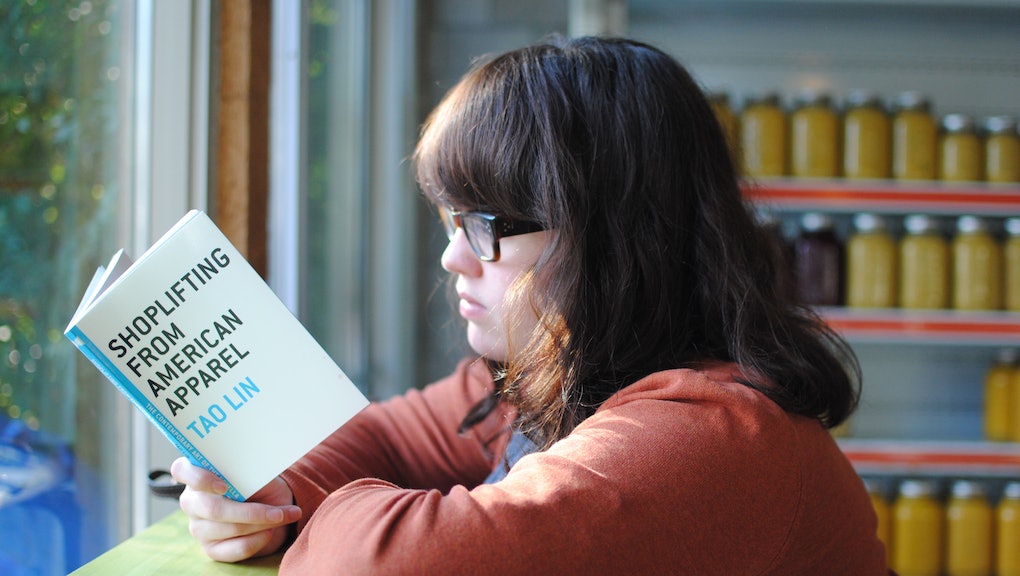 Why do clothing stores like American Apparel and Urban Outfitters carry books? Probably for the same reason that OKCupid users list impressive-sounding books they’ve never read as their all-time favorites (not that I have first-hand knowledge of such things). There are many items on the life checklist that make a person or a brand “cool,” and intelligence is one of them. If you can toss a few tome-y looking volumes onto a spare shelf and manage to come off looking dignified and literate, what’s to stop you?

American Apparel, Urban Outfitters, and Marc Jacobs — three clothing retailers that carry some variety of reading material — are not places where you typically buy books. Nevertheless, these stores have added to their racks of outrageously priced Halloween apparel considerable selections of reading material. But which of these Sam’s-Club-for-hipsters sells the best publications? If by some terrible act of God you were transported to a dystopian hellscape where there were no Barnes & Nobles and these were your only options for book buying (this place is called Los Angeles), which should you choose? Let’s see how these three stores and their literary prowess stack up:

American Apparel doesn’t actually have books, but they do sell magazines that are longer and more expensive than most books, so, according to my dim criteria, they’re still in the game. Of all the publications they carry, the only one I recognized was VICE, but the rest seem reasonably VICE-like, by which I mean that they're loud, juvenile digests read and written by people who mistake shock for audacity. There's Treats magazine ($30.00), the cover of which features a hot man in a suit surrounded by a gaggle of naked women. Then there's Richardson magazine ($33.00), the cover of which featured just one naked woman, but she happens to be hanging by a noose. Vaginas appear on three covers, people clad in mythical-animal costumes on two, James Franco on just one (lame). The majority are fronted by portraits of creepy anorexic models so Nordic-looking they could be the descendants of Beowulf. What's inside these magazines, you ask? More vaginas, more Viking children, and a crap-ton of advertisements, interspersed by the occasional article on clothes, drugs, or music.

I didn’t set my literary expectations high for the purveyor of Herschel backpacks and Cheap Monday jeans. If Urban Outfitters insists on charging high prices for clothes that feel like they were made by a 19 year-old taking an evening sewing class at Jo-Ann Fabric, what hope could I hold out for their books? Unfortunately, the store exceeded my worst nightmares. Perusing Urban Outfitters’ books section feels a little bit like reading the browser history of staff writer at Buzzfeed. I don’t know what literate, income-earning adults actually care to buy books about Grumpy Cats or Cat Hats or 1,000 Ultimate Experiences, instead of just guilt-reading them online for free like the rest of us, but those people apparently exist, and they’re what keep Urban Outfitters’ books division in business. Here are some other titles you can find at your local U.O.:

Hannukcats and Other Traditional Jewish Songs for Cats

The Bookmarc store on Bleecker Street in New York not only wins this competition hands down, it’s also just a fantastic little literary Mecca that every reader and fine arts hound should visit at least once in their life. Don’t all make the pilgrimage at once. At 400 sq. ft., the place feels less like a store than a cramped private study. Books and other merchandise are displayed with a haphazardness that’s all too rare in this age of humorless efficiency. And the selection itself has an equally personal touch. If this were indeed a private study, it would be that of a brilliant, eccentric, skinny-jeans-clad gay professor who likes to ogle pretty men and listen to Robyn when he’s not brushing up on the history of Renaissance art. Among the store’s unique (and admittedly expensive) gems are a vintage exhibition catalog of Andy Warhol’s photography ($175.00) and Damien Hirst coffee table book signed by the artist ($1,400.00), in addition to standard-fare items like Grace Coddington’s recent memoir Grace, and Richard Hell’s I Dreamed I Was a Very Clean Tramp. It’s a consistently badass and very often erotic selection that doesn’t for one moment skimp on intelligence. If more clothing brands decide to create book outlets in the style of Mr. Jacobs, literature may have a future after all.