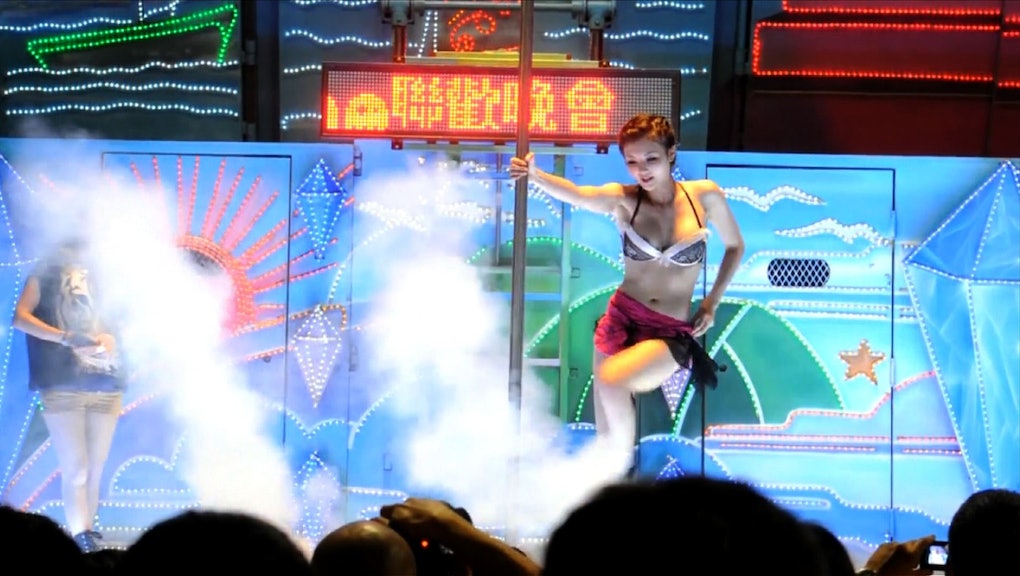 If You Die in Taiwan, There Will Be Strippers At Your Funeral

Amidst the flashing neon lights and blaring pop music, the audience hoots and cheers loudly as girls in short skirts and bikinis emerge on the stage from a cloud of smoke. They twirl around poles, kicking their heels and swinging their legs, still managing to flash a playful smile as they hang suspended in mid-air. This is what a Taiwanese funeral looks like.

The strippers are simply doing their job of entertaining the dead and helping loved ones overcome their grief. They are integral to the healing process for bereaved families and their performance is part of a larger cultural trend that places an emphasis on happiness and celebration, even in death.

This may seem like a lame excuse that men tell their wives in order to get permission to watch the funeral striptease (who hasn't heard the classic "The strippers are just trying to appease the spirits. You know grand uncle would have wanted that.") With all due respect to the dearly departed, the whole affair can be quite comical. For one thing, funeral strippers travel around rural areas in Taiwan on "electric flower cars" (Taiwan has a lot of strange vehicles to offer). To the unfamiliar eye, they resemble a traveling circus troupe. The electric flower cars are convenient because they serve as a mobile stage, in addition to acting as fast get-away cars in case the strippers encounter a brush with the law.

The practice of funeral stripping is deeply rooted in Taiwanese culture. According to anthropologist Mark Moskowitz, accounts of women stripping at temples date back to the 1800s. However, due to government censorship, the media did not start reporting on the practice until the 1980s. The increase in media publicity coincided with the time when mafia bosses who ran Taiwan's nightclubs had also took over the mortuary business. Apparently, one of the mafia chiefs came up with the idea of combining the two businesses in order to maximize profits. From then on, the practice started to gained notoriety, spurring government backlash against it. Politicians decried moral depravity and criticized the practice for being lowlife and disgraceful. As a result, funeral strippers were pushed out of urban areas and into more rural settings.

While government officials may have a problem with funeral stripping, far from seeing it as inappropriate or offensive, it has evolved into a highly popular and accepted practice in Taiwan. In the seven years that I lived there, I could never tell the difference between the weddings and funeral processions that always seemed to take place in the Daoist temple in my neighborhood. Both were loud and boisterous and involved marching bands, drummers, and scantily-clad women. While in some cases, the funeral strippers may smother their breasts in the faces of male onlookers, often times, the striptease is devoid of strong sexual connotations. Rather, it is meant to celebrate the beauty of life and to cheer up the bereaved family.

Since the practice is technically illegal, not much has been written about the girls themselves aside from Mark Moskowitz's interview in the Taipei Times. In it, he talks about how the girls, who start dancing as young as 16, are required to undergo rigorous training before earning the title of funeral stripper. Moreover, they don't see themselves as being exploited or objectified. But rather, they do it as a means to earn a living and also out of passion for performing. I agree with Chloe Cross from Vice that as long as no one is forcing the girls to strip and both sides are having a good time, then this practice shouldn't be a problem.

I've previously written about how Taiwanese culture places a huge emphasis on being happy and how this pursuit of happiness manifests itself in various forms, from singing garbage trucks to Hello Kitty airplanes. Funeral stripping simply fits within the wider context of this bubbly and lively culture which looks for a silver lining even during the gravest situations. Although it may be difficult to wrap our minds around the whole concept of funeral stripping, it simply highlights the cultural relativity of everyday matters. On the other hand, I'm sure that all the Barney Stinsons and Charlie Harpers in the world would greatly approve of such a tradition.