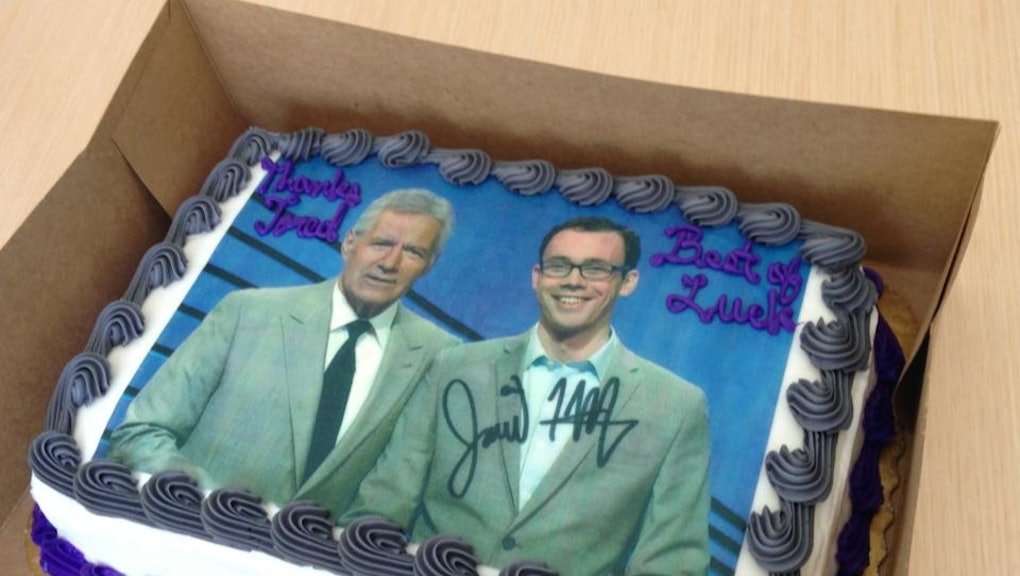 Insider Tips on How to Win Jeopardy, From a Six-Time Champ

(Do not miss Jared's feature story.)

My time as a Jeopardy champion wasn’t accidental. I did some serious preparation prior to my appearances. A day-by-day outline of my training regimen would be boring, depressing, and slightly distressing, so instead, I’ve compiled a list of recommendations. Here they are in case you ever aspire to be on the show.

I think there’s a popular perception, even amongst prospective Jeopardy contestants, that studying for the show is impossible. People hear the maddeningly broad range of questions that are asked on any given episode and declare that preparing for such a game is pointless — you either know it or you don’t, right?

Wrong. Given the right resources and the right mindset, it’s quite possible to gain an edge through studying. On every episode I played, I knew at least a handful of responses as a direct result of my preparations. In a competitive, fast-paced game like Jeopardy, a couple of questions can make a huge difference.

2. Know Your Weaknesses. Know What You Don’t Know.

If you only spend your time studying your favorite subjects, you’re going to have a bad time on Jeopardy. Knowing your weaknesses is essential — probably more essential than knowing your strengths.

The only way to study strategically is to focus on those areas where you need improvement; you want to be as well-rounded as possible. The key here is being familiar with the material — knowing which types of subjects come up a lot and knowing how much you should know about each of them.

The only way to figure out what you don’t know is to go to the source. If you’re going to be appearing on Jeopardy, and even if you’re just auditioning, you should be watching the show as much as possible. Every day. If your local station airs re-runs, watch those too.

Thanks to the tireless labors of the folks who run j-archive.com, you can also review almost every Jeopardy clue that’s ever aired. Take advantage of this! You’ll begin to notice recurring themes, repeated phrases, and subtle clues all over the board. Once you start to get inside the minds of the people who write the clues, coming up with your responses will be much easier.

Watching the show religiously will also help attune you to the show’s overall rhythm and pace. Without a good sense of how quickly the game goes, you’ll never win on the buzzer.

4. Step Up Your Buzzer Game

It’s been said before, but I’m going to say it again: It’s all about the buzzer, folks. Almost 100%. Buzz in too early, you’re locked out for a split second. Buzz in too late, you’re playing catch up on the next question. If you can’t tune into Alex’s voice and sense the exact moment when he finishes speaking (which is when the buzzers are activated), your road to success will be arduous.

Your best training solution? Make a practice buzzer out of a clicking pen (pro tip: use the Jeopardy pen they gave you at your audition; there’s a reason it’s shaped just like the buzzer!), and buzz along at home. Reflexes are hard to improve substantially, though, and some contestants have an innate advantage.

5. Be As Arrogant As Possible

I know this sounds bad. Of course, when you’re interacting with Alex, the contestant coordinators, and your fellow contestants, you want to appear as humble and congenial as possible. That’s fine. But when you’re standing up there with your thumb on the buzzer and your eyes locked on the game board, confidence is essential. Even to the point of arrogance. Guessing, bluffing, and risk-taking all are core elements of success on the show. Feeling comfortable with all that is nigh on impossible without a serious sense of self-regard (even it it’s been artificially inflated). No one likes a timid, tentative player, and players who don’t seem self-assured rarely win. Yes, it’s nerve-wracking to be up on that stage with the lights in your face and Alex staring you down, but you can’t let it faze you.

6. Get Better At Betting

Wagering strategy can make or break your game. If you always bet small, you’re pretty much guaranteed to lose. If you bet big and lose, you’re kind of screwed, too. I got burned in my last game by an incorrect response on a $5,000 wager. But I was wagering to win. Betting aggressively and with confidence can pay dividends: Out of my overall total, I won $72,601 just from wagers on Daily Doubles and in Final Jeopardy.

Obviously, there’s a major element of risk here. I saw one great competitor lose mostly because of a big bet on a Daily Double late in the game — but it’s the only way to win. Be smart about it, but if you’re going to lose, lose like a winner.

7. Never, Ever, EVER Look Trebek Directly in the Eyes

He can see into the deepest crevices of your soul.

(Keep an eye out for Jared's feature piece about his seven episodes on the show, coming very soon.)