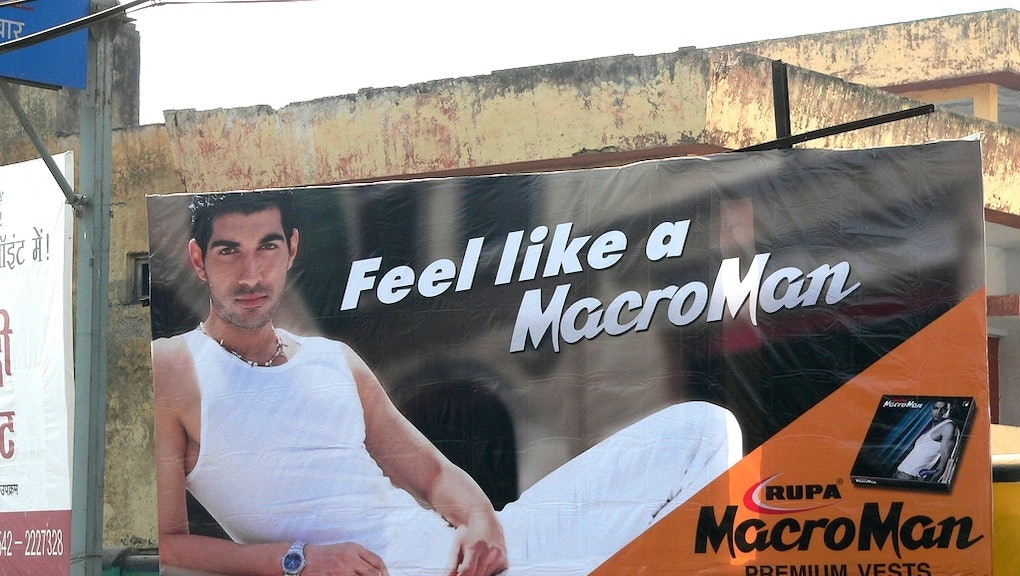 I have been fortunate to know many men who are "committed, concerned, cautious; intellectually curious, linguistically witty; socially gregarious, endearingly awkward; quick to laugh, slow to anger." None of those qualities had a even the slightest connection to their geographic or political nationality.

Lavanya Sankaran, writing for the New York Times, would have you think that these are attributes exclusively typical of the "common Indian male." She believes it is important the "good men of India" be recognized for possessing these unique qualities. As if being born in India, you are somehow responsible for these values. She believes that this "alternative reality" of good men should be examined, when rape is daily news in India.

When I expressed my general indignation with the post, a couple of my friends said that maybe the intent of the Sankaran's article was to provide a contrary opinion to the widespread image that the Western world might have of Indian men, owing to major publications highlighting the concerns over women's safety in India.

Maybe, but countering a foreign generalization with a domestic generalization, relying purely on anecdotes (interviewees feeling "cherished" and "safe" with Indian men) as data, does not project Indian men in a better light. What it does is highlight a desire to sugarcoat and misrepresent dangerous social elements within India.

The primary problem with Sankaran's characterization is her focus on the concept that virtues like kindness, concern, intellectual curiosity, and an interest in one's family ought to be recognized and celebrated in the Indian male. I love my father for continuing to keep learning new skills, and his interest in my pursuits. Does it connect him to a larger Indian male ethos? Not really. I love this Aerogram piece, which replaces Indian men with American men within the same article, and exposes just how generic that characterization of "Indian" goodness really is.

Another massive factual leap that Sankaran indulges in is stereotyping "feral" immigrant men, who she asserts are devoid of familial connections and exposed to violent pornography and well-dressed urban women, respond to their circumstances with sexual violence. Not only does her claim reek of urban xenophobia, but classism, wherein perpetrators are from a lower strata of society. She conveniently forgets to mention that the majority of rapes are committed by people known to the victim, (nine out of 10 cases, as reported by four states). I'm not even going to start on marital rape.

In another twist, she applauds Indian men for being associated with the phrase "Main hoon naa", meaning "I'm here for you." It is wonderful to have a reliable and committed spouse, friend, or parent. However, when that reliability is celebrated at the expense of condoning and trivializing deep-rooted paternalistic tendencies, as Sankaran does in her story, there is a problem.

Sankaran refers to "judgmental and stifling" aspects of Indian culture, and a "proud or oversensitive emotional landscape" as mere "annoyances." I am extremely uncomfortable with such a casual dismissal of factors that are contribute to curtailing women's freedom. In one of the most popular Hindi films of all time, Dilwale Dulhaniya Le Jayenge, a chauvinistic patriarch forces his daughter to marry a stranger because of his own familial pride, and is hostile towards her love interest, but then finally decides to allow his daughter to marry her true love at the very end. It's a happy ending, but the story is troubling. The politics of family pride and ownership should not be celebrated as being integral to Indian-ness.

As for the tradition of an "old uncle network" within professional spheres, and the attendant assumption that successful women are likely to have supportive males in their lives, this undermines the professional struggles of countless women who achieved what they have on their own. If you have fathers, spouses, and friends who support your career "despite" you being a woman, that's great. They should. It isn't a sacrifice on their part.

A number of my friends shared the NYT story on social media, with self-congratulatory captions about the good men of India. Indian men, like men in the rest of the world, are not all the same.

Like American men, their "goodness" isn't a matter of national morality.