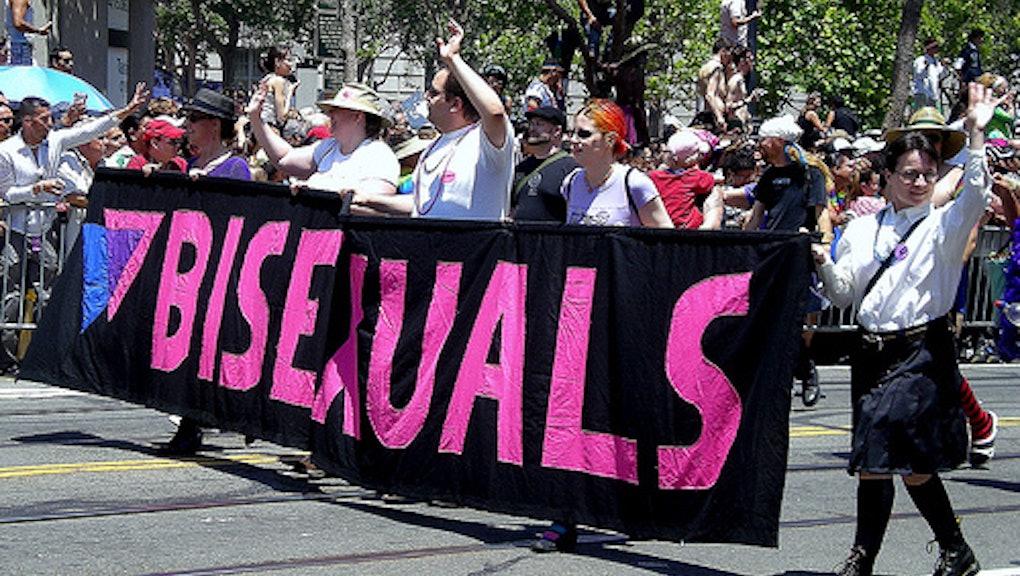 Although our name certainly suggests otherwise, bisexuals don't have a lot of choices. You could argue we’ve doubled our chances at love, but in pop culture you see straight people, increasingly homosexual couples, and even singlets on television, but rarely is there a mainstream depiction of a bisexuality.

And if there is, you can bet it will be strange.

As if being bisexual makes you the uninhibited fairy-spirit person of the QUILTBAG! We have Brittany the cheerful bisexual unicorn on Glee; the sociopath on Basic Instinct; and now I guess Mulan on Once Upon a Time has been subtley nudged out of the closet.

I kissed the first girl I ever kissed at 12. It was an issue of attraction, not a political statement. At 18, I lived with a woman and we never talked about the fact that we were in a relationship. Between us, there was no definition of terms in the relationship because there really didn’t have to be. People asked if we were together and we glossed over it. We’re friends, we’d say.

When I was younger, it didn’t feel safe to come out with my family, because anti-gay statements were routine and I knew the high statistics of homeless queer youth. "It’s no one else’s business," I would tell myself.

From my iPhone: San Francisco 2013

The only place she and I really existed as a couple was a local gay club. It was run down and yet fabulous in only the way that gay bars can be. Neon paint smeared the walls, and the bathrooms were filthy. We would head out in happy anticipation when we could scrape together the money to pay the entrance fee. Once we were there, we didn’t have to explain ourselves because people didn’t ask questions. They accepted if you were together, or together-ish. If you were to come with a man and a woman and dance with both no one would try to infer what it all meant.

Being bisexual is a mystery to some people, and I think a part of that is that it 's something you don’t see. Bisexuality is generally used as trope in media. We’re in the Will and Grace-stage: two-dimensional, but with a promiscuous or psychopathic edge. The only deviants left on the Kinsey scale. Mainstream writers define bisexuality by who we have sex with rather than as an aspect of our identities.

The very nature of bisexuality makes us predisposed to erasure. When my two female bisexual friends go out on a date, people see two women and assume lesbian. In an opposite-sex relationship, it’s a bit like living a life in the closet. I’ve sat across from friends who told me that bisexuals don’t exist, and I have had to say, "I’m right here. I’m real."

The fact is, there are a lot of us, but not a lot who are out. In a 2013 Pew report on LGBT Americans, bisexuals were far less likely to be out to important people in their lives than lesbians and gays. While 77% of gay men and 71% of lesbians reported that most important people in their lives knew about their sexual orientation, the numbers for the bi-sexy were a much smaller 28%.

In an opposite-sex relationship, the LGBTQ communities feels less accessible. People complain about straight couples coming to the bars. I get it. I remember that it needed to be a space where you could be queer without heteronormative scrutiny.

And yet I’m not straight. I’m here. I exist.