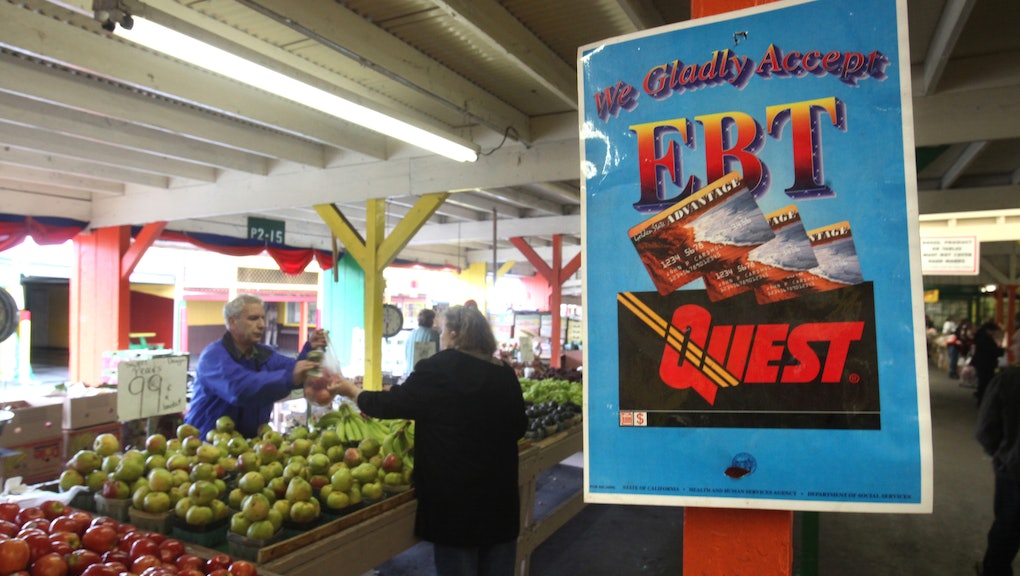 Think food stamp fraud never happens? Think it's in such small amounts that it's inconsequential? This year in September alone, four high profile cases of food stamp fraud came to light. We need tighter restrictions on those who can apply for and stay on the SNAP program.

On Sept. 17, nine retailers in Baltimore were indicted on charges of food stamp fraud in the amount of $7 million dollars. The retailers allegedly traded the food stamps for cash. On Sept. 30, two San Diego-area grocery store owners were arrested for food stamp fraud of nearly $500,000. On Sept. 23, two Cleveland men pled guilty to $2 million dollars in food stamp fraud. And at the beginning of the month, the authorities seized almost $700,000 in cash from convenience store workers in Phoenix who. And these cases are just the ones that got caught.

Opponents of increased food stamp restrictions often try and point to claims that food stamp fraud is only equal to around 1% of the value of food stamps distributed in the U.S. Do those enormous amounts of money sound like such a small percentage to you?

Now, Craigslist is making turning food stamps into cash as easy as posting an ad. Here are some examples:

Since January 2009, the number of individuals on food stamps has skyrocketed from 31.9 million to the current record high 47.6 million. States like Florida have hired “food stamp recruiters,” who have a quota of signing up 150 new recipients each month. Rhode Island hosts “SNAP-themed bingo games,” and the USDA tells its field offices to throw parties to get more people on their rolls. Over the last five years, the cost of food stamps to the taxpayers has doubled. According to reports, nearly 850,000 people were investigated for possible SNAP fraud in 2011 in the United States, and 1,200 stores were permanently removed from the food stamp program for illegal conduct.

In some states, welfare recipients can end up getting more money than those who work a job, according to an analysis report of state benefits this past August. In 12 of the states studied, welfare recipients make more than they would at a $12 per hour job; that’s more than minimum wage. A mother of two in New York is eligible for $38,004 per year in welfare handouts. That’s more than some teachers make. With taxpayers paying for benefits like these, where is the incentive to work? Why not just continue on welfare instead of looking for employment? It's likely most do exactly that. The majority of SNAP recipients (56%) are on the program longer than five years, and fewer than 10% are on food stamps for six months or less. An investigation done last year showed that some welfare recipients were spending those taxpayer dollars at strip clubs and liquor stores, complete with ATM withdrawal records.

The percentage of Americans selling their food stamps back to stores for cash has increased by 30% over the past several years, according to a new Agriculture Department study. Nearly 17% of recipients have income levels above the poverty line due to weak eligibility standards. We've increased the cost of the food stamp program to taxpayers from $17 billion in 2000 to $78 billion today, and somehow people still aren't getting enough. This is because there are people taking advantage of the system, and it needs serious reforms to prevent this.

Several weeks ago (on Sept. 19), the House of Representatives pushed through a bill that would slash billions from the food stamp program and would also tighten restriction on what types of food food stamps can buy (roughly $2 billion in food stamps go to purchase junk food); the bill would also require adults without minor children to find a job. This is a great requirement, one that would push people to find work after having temporary help. After all, isn't the goal of food stamps to provide temporary help? Requiring an adult without young children to look for work is a common-sense requirement. The bill would also limit the time able-bodied recipients can receive food stamps to three months. It would allow food stamp recipients to be tested for drugs and to stop lottery winners from getting benefits. Employees across the country have mandatory drug testing at employment; we can be drug-tested for money we earn, but not for money we don’t? Unfortunately, the bill has little chance of passing through the Senate.

Yes, the SNAP program has its place. Yes, many people legitimately need SNAP, and proponents of restrictions have no problem helping them. They simply don't want the trend to continue of those who don't need SNAP taking advantage of it, driving up the costs for the rest of us. If you are one of the people who claim to be concerned over honest, poor people not getting their SNAP benefits, why wouldn't you want the fraudsters weeded out with tighter restrictions?