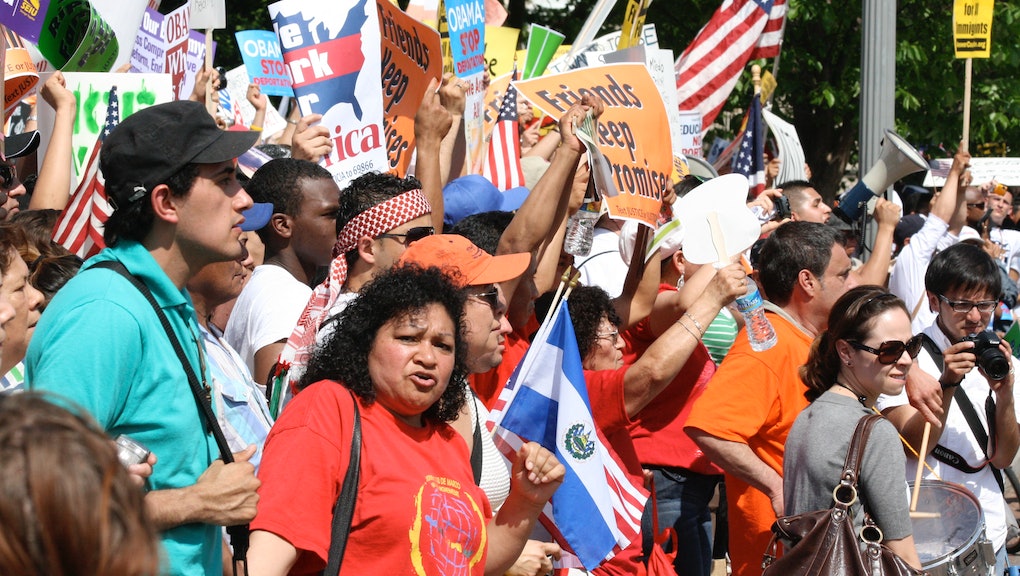 Immigration Reform 2013: House Republicans Are Getting Their Big Shot

As Washington resets from this month’s fierce fiscal battle, immigration-reform advocates are ramping up pressure on lawmakers to pass an overhaul before the end of the year. Since early summer, such advocates, joined by President Obama, Democrats, and a small group of Republicans, have gained little traction on the issue.

Political distractions, most notably events surrounding Syria and the government shutdown, have stalled efforts to give a path to citizenship to the more than 11 million undocumented immigrants in the United States. Passing immigration reform before the new year is looking increasingly unlikely, as only eight weeks remain before new fiscal deadlines and the midterm elections will start to dominate conversation. Despite bleak chances, House Republicans should cautiously work with the Senate and President Obama.

While June brought sweeping overhaul from the upper chamber, many House Republicans remain skeptical. Further complicating efforts is a lack of any timetable for House leadership to bring a bill to the floor.

But there are reasons for guarded optimism. A few House Republicans have been working on immigration bills that, as part of a larger package, would individually reform existing legislation. This piecemeal approach, distinct from the Senate’s comprehensive overhaul, is being spearheaded by a group of House Republicans including Judiciary Committee Chairman Bob Goodlatte (R-Va.), Ted Poe (R-Texas), and Raul Labrador (R-Idaho). In addition, a spokesman for Speaker John Boehner (R-Ohio) says the House speaker “remains committed to a step-by-step process to fix our broken immigration system.”

This package strategy — far from a panacea but a step in the right direction — can readjust a status quo in which illegal immigration has lowered the wages of U.S. adults without a high-school diploma by as much as 7.4%.

While House Republican leadership officially maintains that immigration reform is still possible, others in the party, both in public and private, insist that any chances of negotiation with the White House were spoiled by the fiscal battle. “The president’s attitude and actions over the past few weeks,” a senior congressional Republican aide told Politico on Monday, “have certainly made getting anything done on immigration considerably harder.” That sentiment is shared by Rep. Labrador, a Republican widely viewed as a key mover behind immigration reform: “It would be crazy for the House Republican leadership to enter into negotiations with him on immigration.”

This sentiment is understandable: Providing Obama with an opportunity to pass legislation he sees as fundamental to his second-term legacy risks another tactical failure. If negotiations do not center on House Republican strategy, the GOP could further disenchant Hispanic voters with Republican ideas. Republicans cannot afford to give the Senate and White House a stage to lambaste them as unfriendly to an increasingly important voting bloc.

But the inclusion of a path to citizenship in the House package will help, not hurt, American taxpayers. An approach increasing temporary visas would, according to the Centre of Policy Studies at Monash University, produce direct welfare gains to U.S. households “equivalent to 1.19% of the gross national product, or $170 billion." Furthermore, worries that “amnestied” immigrants will burden welfare rolls is overwrought. Immigrants, both illegal and legal, do not heavily use welfare programs, and further restrictions can be placed on those seeking citizenship. Besides, eligibility for means-tested welfare benefits — those that many fear will be abused by freshly-minted citizens — is currently restricted to those who maintain legal citizenship for at least five years.

As the window to pass immigration reform narrows, House Republicans should work to produce immigration reform that will begin to fix a broken system. A cautious strategy balancing enforcement with legalization can procure enough votes to pass the House and Senate while giving Republicans more Latino support heading into next year’s midterm.