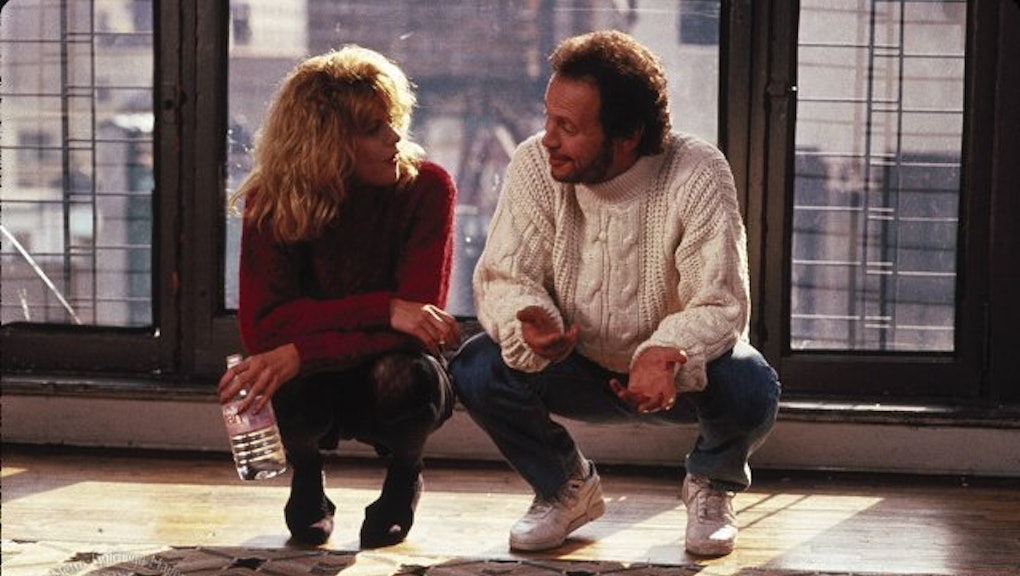 As a New York transplant, I always wonder whether native New Yorkers notice the strangeness of their New Yorker lifestyle. Do they notice that it's not considered polite behavior in most places to order your coffee from the barista without so much as a "Good morning?" Do they notice how it's strange that grabbing "a quick lunch" is the default option — how it's embedded in their work schedules and expected by their employers that most of their lunch will be carried out of the restaurant or away from the cart? And forget about finding it strange, do New Yorkers even notice that there is always one person just standing in the subway station talking to themselves?

Many New Yorkers live in a world so far removed from the places surrounding this massive island that entire generations have projected their dreams about it onto art. The films, in particular, have given credence to the theory that New York is a sort of haven, one that may not necessarily exist as it's imagined, but does have its basis in reality.

This Audrey Hepburn classic is but a shadow of the terrific novella that serves as its inspiration, but it is perhaps worth watching strictly because it is such an integral part of Hollywood history. It has beautiful cinematography that crafts a terrific picture of upscale, New York socialite life in the sixties. While it may display a reality that would be inapplicable for most non-wealthy New York transplants (or non-wealthy New York residents in general), it is still a wonderful display — and condemnation — of the things that people like protagonist Holly Golittle have done in the name of upward mobility. Keep in mind that this recommendation in no way condones the racist caricature of Mr. Yunioshi; in fact, if you don't cringe at those scenes, you are an utterly despicable person worthy of the worst sort of contempt (kidding, but not really).

There are few stories that offer such a serene outlook — on both New York and relationships — as this Nora Efron classic. But other than its nuanced and often hilarious look at the rituals of human courtship and the institution of marriage, one of the reasons everyone should watch Meg Ryan and Billy Crystal's best performance is because the story is a great look at the life you can achieve if you are a fairly wealthy New Yorker. Our characters are writers and lawyers that spend their times in museums and fancy restaurants, with the cityscape serving as a perfect backdrop to their success. The story nicely demonstrates how a contemplation of the finer points of the signifier known as "love" is best left to those who do not have financial concerns ranking particularly highly on their list of priorities, and the film's locales and photography are a tourist's dream. As a recommended viewing, watch The Women (2008) starring Meg Ryan to see the other (albeit not as well-executed) half of this scenic picture.

Perhaps a story that can even serve as an argument against multiracial societies, one of Spike Lee's last well-regarded films depicts the most terrifying side of New York: its history of being a center of violence where racial tensions and bigotry erupt. While this isn't exactly recommended viewing for the light of heart, it is still an essential film that demonstrates how quickly a normal day in New York can turn very, very bad. Due to financial constraints, many people who move into New York are often relegated to neighborhoods that are far beyond the reaches, and perhaps even the interest, of law enforcement, which is why any notion that you are "safe" from racial violence and hatred should be quickly dispelled.

While Spider-Man's home is more thoroughly explored in the comics than the films, director Sam Raimi still effectively captures a somewhat dated but still relevant view of New York. From the old family homes in Queens to the bustle of the newspaper publishing industry, Peter Parker's story lives and breathes New York. As he works for an immigrant pizzeria owner and dodges cabs while recklessly driving his bike in the middle of stuck Manhattan traffic as his immigrant landlord chases him for money, the city truly comes alive. The woman of his dreams is a Broadway actress, a feat only possible in New York because, when it comes to stage, no American city is on a higher pedestal. The city infrastructure is also crucial to so many of Spider-Man's stunts (including the most epic train scene ever) that it simply cannot be anywhere else. The constant overload of noise and people of every type is a part of living in the city, which the movie captures perfectly. Plus, every transplant should be more than ready to receive just as warm a welcome at their job as Jonah Jameson gives Peter Parker every morning.

And oft-overlooked film in Ryan Reynolds' somewhat questionable resume, this romantic comedy is quite blatant in its premise of New York as a sort of haven for some non-New Yorkers: a small town young man who arrives in the city in 1992 to work on a campaign for Bill Clinton. Along the way, our Wisconsin native also struggles with his love life, first with a woman from back home, then with a journalist, and finally with a fellow campaign worker. Clearly, he considers Bill Clinton an idol, even when it comes to romance. The film seemingly gives the impression that, amidst liberal circles, there was near-universal acceptance of Clinton and what it captures perfectly is how Reynolds' character has to navigate so many sectors of life that are common in New York. He has to deal with snobbish academics and court the wealthy for donations while still trying to keep in touch with the few non-New York things he hasn't left behind. Also, every transplant will eventually learn, you do not know real hell until you have tried to plan an event in the city.

So what are your favorite movies New York movies? Are there any that every transplant should watch? Share your thoughts in the comments below.